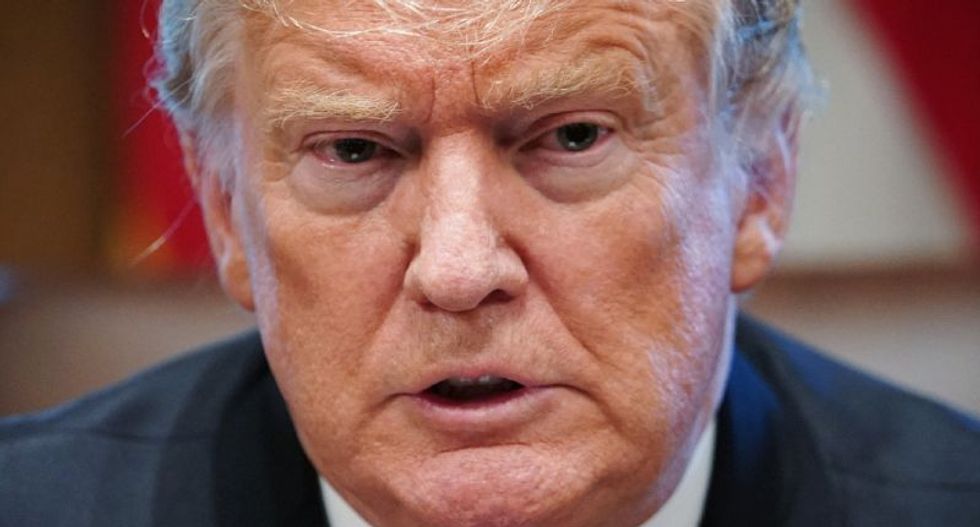 During a Wednesday discussion on MSNBC, Morgan State University professor Dr. Jason Johnson and Bulwark founder Charlie Sykes both agreed that President Donald Trump's failed leadership in dealing with the coronavirus could be his undoing.

"Trump is great with coming up with nicknames and attacking people," said Dr. Johnson. "And he has mostly spent his life by mistreating women and mistreating Black people. That's how he got ahead in politics. He can attack Barack Obama. He can attack Hillary Clinton. Now he's got a white guy in his 70s -- who doesn't like Joe Biden? So, Trump doesn't have anyone to distract people with. He can't say, 'Look over here at the brown person. Look at the woman. Look at this person who can't handle it as well as I can as a straight white man in office.' And that is making it more difficult for him to distract people from his sheer and utter magnificent incompetence."

Going forward, Dr. Johnson said that he doesn't think there's a way for Trump to get out of his own failures.

"He tried, he got himself impeached," he continued. "There's no way to say, 'Joe Biden will handle this worse.' Because people in Ohio, and Arizona, and Florida, and Georgia -- they can't see a worse version of this. he can't claim, 'I'm managing the economy better.' Because the economy is going into the gutter. Schools don't know if they'll be able to open. Movie theaters are done. The president is in the most difficult position has ever been in in his life. I don't see how he gets out of it because Joe Biden, all he's got to do is sit back and the Republicans are circling in the firing squad at this point and all he's got to do is walk into the White House."

Sykes agreed, saying that Trump is clearly the wrong person for the moment because his appeal is about anger and chaos.

"I think what America needs right now is empathy and competence," said Sykes. "And a country that is exhausted and [is] looking for someone to lead someone who actually seems to have normal human emotions is something that he can't change. He can't change that dynamic."

Host Nicolle Wallace asked what Johnson thought Trump would do as things look more and more difficult to win.

"Well, so, you know, he's already made it clear he's stoking racial violence," said Dr. Johnson. "And I remember back in the 2016 Democratic convention when all the people got on stage, most of us were probably there and they were singing, you know, 'What the world needs now is love, sweet love,' and I thought it was corny at the time, but now it makes sense."

But what he truly fears is that in the weeks before the election, Trump will begin to get desperate and do whatever it takes to cheat.

"And the president's only way of combatting that is by saying, 'look, vigilantes, attack the governor of Michigan. Refuse to wear a mask,'" said Johnson. "And if he ends up losing, and I am convinced right now, if we look at the numbers, we look at the economic data, look at the demographic data, the only way that Donald Trump can win this fall is if he cheats, and cheats at a massive level. It looks like a week out he's still losing Pennsylvania by double digits and losing Michigan and losing Florida and losing North Carolina and having to spend money in Arizona, I have long believed that Donald Trump will not leave office. And we have to remember, the fear that I have is not just that he won't leave, but remember, because so many of these ballots are going to be coming in by mail, we're not going to have a new president on election night. It's going to take weeks. You'll have militias showing up at vote counting places threatening people. We are in for a very, very difficult couple of months. We may be comfortable at the polling now, but we've got to recognize that we have a president that is a proto dictator and will do anything in his power to stay out, regardless of what the numbers say."