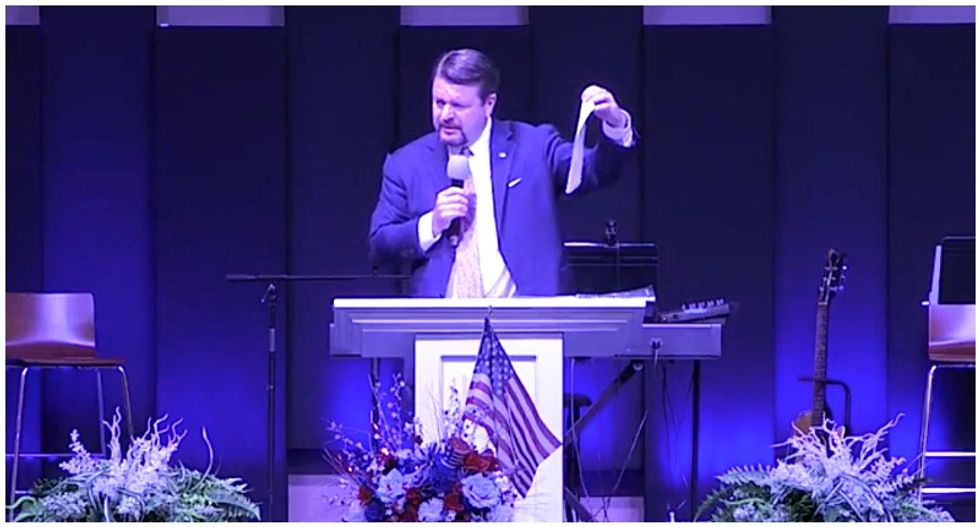 Arkansas State Sen. Jason Rapert (R) has a known history of downplaying the coronavirus, even pushing narratives on social media that describe it as a "hoax." Now, he's contracted the virus after appearing as a guest preacher at Sanctuary of Hope church in Branson, Missouri about two weeks ago.

According to a post on his Facebook page this Thursday, Rapert is in the hospital "after being diagnosed with pneumonia and testing positive for Covid-19." The post adds that he's "responding well to treatment."

“This is a difficult time for my family, but we know that God is with us always,” Rapert said. “We’re sincerely grateful for the many prayers of love and support that have been expressed on our behalf.”

“We have all been doing our best to wear a mask, social distance and be careful like everyone else. This virus is serious and can attack anyone regardless of age or general health," he added.

As the Friendly Atheist points out, no one seems to be wearing masks at the church service he participated in.

Just as late as this past week, Rapert spoke out against his state's mask mandate, saying that he opposes it in principle and that it's "an overreach of executive power without consultation with the members of the Arkansas legislature."

"I understand the governor has expanded authority during a declared state of emergency, but with most people already complying where necessary and the death rates, hospitalization rates and positivity test rates all hovering just below 1% in our state - I believe this mandate was ill timed and not necessary," he wrote in a Facebook post on July 16.

The Friendly Atheist's Hemant Mehta writes that while he takes no pleasure in Rapert's illness, he would like to see him lose an election.

"...this is a guy whose party has dragged its feet on protecting people from the virus, and who himself was recently in a church where precautions were ignored. What did he think would happen?"