Scientists puzzled by massive star that vanished without a trace 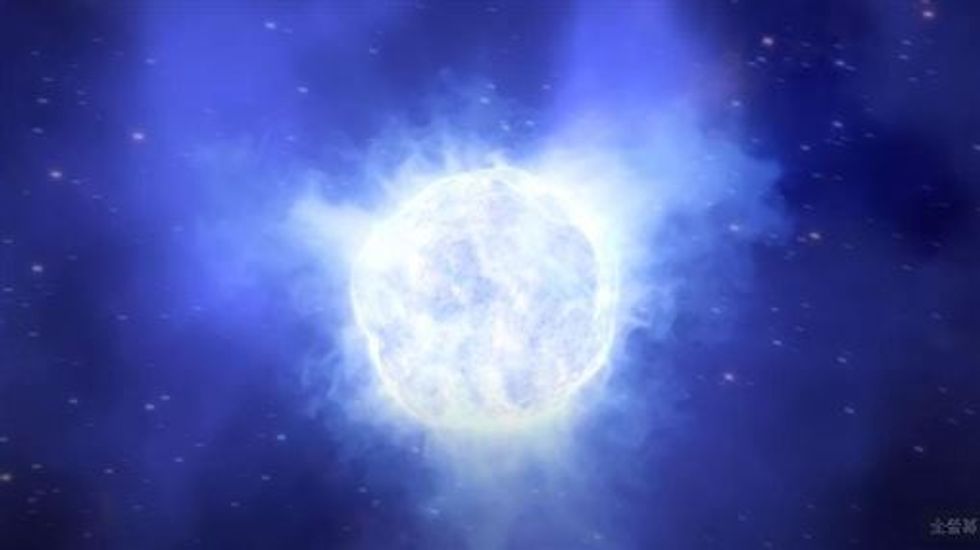 PHL 293B in Kinman Dwarf Galaxy
Since 2001, astronomers have been aware of a massive star in the Kinman Dwarf galaxy, which is about 75 million light-years away from Earth in the constellation of Aquarius. Then, one day in 2019, it disappeared suddenly and mysteriously.

That left many scientists scratching their heads. How did Mother Nature manage to hide such a bright, enormous star, without leaving so much as a poof of smoke in its wake?

In a paper published in Monthly Notices of the Royal Astronomical Society this week, astronomers raised two possible theories as to why the massive luminous blue variable (LBV) star has gone missing.

"One possibility is that we are seeing the end of an LBV eruption of a surviving star, with a mild drop in luminosity, a shift to hotter effective temperatures, and some dust obscuration," the authors write. "Alternatively, the LBV could have collapsed to a massive black hole without the production of a bright supernova."

If the latter is true, it would be an extraordinarily rare event, and maybe the first detection of such a massive star ending its life like this, according to the astronomers who made the observations using the European Southern Observatory's Very Large Telescope (VLT). Stars usually end their lives with a radiant explosion, also known as a supernova, which in many cases leaves a new black hole behind.

"It is extremely rare to find a star right before the end of its life," Jose Groh, a professor of astrophysics at Trinity College in Dublin and co-author of the paper, explained to Salon in an email.

Groh added that such an event has only been observed once in the past.

"In the galaxy NGC 6946, where a smaller massive star seemed to disappear without a bright supernova explosion," Groh said. "In our case, the star is much more massive and is located in a small galaxy, which makes the finding unique and could hold important clues as to how stars could collapse to a black hole without producing a bright supernova."

These kinds of fizzled-out stars are extremely rare. Avi Loeb, chair of Harvard's astronomy department, told Salon via email that this rare class of stars are called "failed supernovae."

"A survey for such stars was initiated twelve years ago by a team of astronomers at Ohio State University and an example was reported by Gerke et al in 2015 and confirmed by Adams et al. (2017)," Loeb said, pointing Salon to a paper on ArXiv.

In general, luminous blue variable stars are known to experience giant outbursts of matter throughout their life. Such outbursts cause the stars' rate of mass loss and luminosity to increase.

The star in question, according to computer simulations, is really big — or was. Its mass was somewhere between 85 and 120 times the mass of our sun, and its volume was vast too — "between 50 and 400 times the size of the Sun," Groh explained. "So it is a supergiant star."

How could a giant star disappear so fast?

"The end of the life of a star proceeds really fast," Groh said. "This massive star spends millions of years burning hydrogen, then another million years burning helium, and towards the end the timescales become shorter and shorter; It burns silicon in a week, and then oxygen in just about a day."

Loeb added that "if gravity is too strong, the star implodes altogether and transforms into a black hole with no visible explosion." In other words, a "failed supernova."

While it would likely leave behind some sort of X-ray Burst, Groh said that usually only lasts for a few days.

"So we need to observe the star using an X-ray telescope in space at that precise moment," Groh explained. "Because we cannot tell when the star will disappear exactly, it is difficult to do these kinds of observations."

"We would need to know beforehand the date and time when the star would form the black hole," Groh added. "Also, in our case the star is located in a distant galaxy, so it is faint."