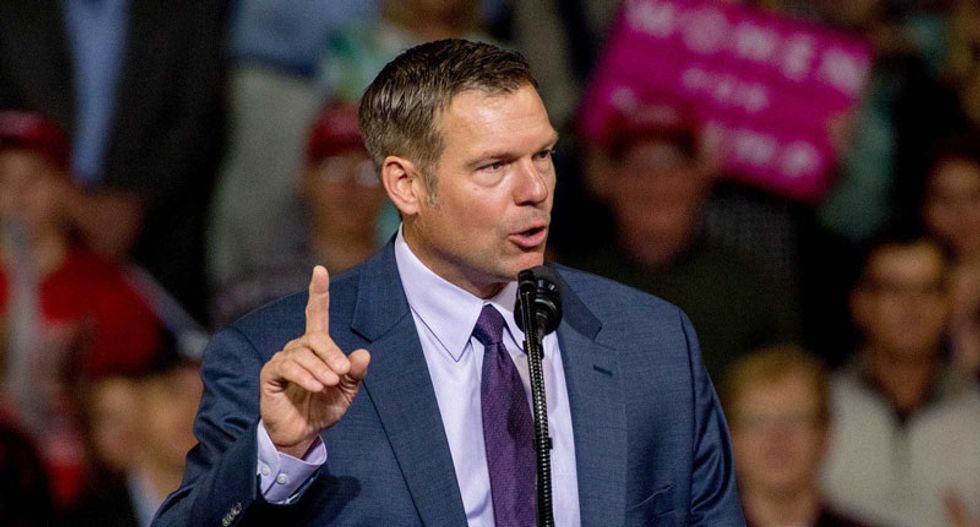 With Republicans in fear of losing the U.S. Senate in November, the last thing they need is for far-right extremist Kris Kobach to win the state’s GOP senatorial primary this summer and put the seat in play for Democrats. And Kobach’s recent comments on COVID-19 are a prime example of why Democrats believe they could defeat him in the general election: Kobach is claiming that the coronavirus death count is being exaggerated as part of a conspiracy to hurt President Donald Trump. Regardless, Kansas’ former secretary of state continues to pursue the nomination, and he has a major ally in tech billionaire and venture capitalist Peter Thiel.

On the YouTube program “National File,” Kobach said of the pandemic, “I believe that the numbers are being cooked.”

According to researchers at Johns Hopkins University in Baltimore, the COVID-19 pandemic has killed more than 654,300 people worldwide and over 148,000 in the United States. Truth be told, that 148,000+ figure is probably too low — as the death count in the U.S. focuses on hospital deaths and doesn’t take into account all of the Americans who have died from COVID-19 in their homes and were never hospitalized. But Kobach nonetheless insists that the pandemic isn’t as deadly as Trump’s critics are making it out to be.

On the July 13 edition of K-File, Kobach claimed, “The books are being cooked, and the purpose, at least on the political left, is to use those numbers to scare the public and to scare the political leadership into shutting down. Now, they want to continue the government shutdown for — the business shutdown — with government pressure, for as long as they can. If they can slow it down by using masks as a signal that things are not back to normal — and therefore, you should not go out, you should not buy, you shouldn’t open up your business yet — whatever, but the reason is obvious.”

Such claims are a prime example of why Democrats believe they could defeat Kobach if he wins the Republican senatorial primary in Kansas and makes it to the general election — especially in light of the fact that Democrats defeated him once before. In Kansas’ gubernatorial election in 2018, Kobach (who served as chairman of the Kansas Republican Party from 2007-2009 and as Kansas’ secretary of state from 2011-2019) lost to a Democrat: centrist Laura Kelly, now Kansas’ governor. And as deep red as Kansas is, Kobach’s defeat in 2018 demonstrated that a Democrat can win a statewide race in that state if the GOP nominee is extreme enough.

But as extreme as Kobach is, he has found a major ally in Thiel. According to Vox’s Theodore Schleifer, Thiel held a fundraiser for the Republican in Manhattan and has since “pumped $850,000 into a super PAC behind Kobach.”

Schleifer reports, “If Kobach is elected, it could give Thiel a loyal ally in the Senate because of how powerful he is proving to be in the race. That alliance becomes all the more key if Trump loses this fall, which would weaken the Washington influence of Thiel — a board member at Facebook and a founder of Palantir, which has deep ties to the government.”

Patrick Miller, who teaches political science at the University of Kansas, believes that Thiel has become indispensable to Kobach’s Senate campaign. Miller told Vox, “I don’t want to overstate it and say that Kobach wouldn’t have a campaign without him. But I think the money that that super PAC is putting into the race — primarily through this one rich guy — is absolutely the lifeblood of the pro-Kobach campaign at this moment. You take that money away, and Kobach doesn’t have a lot of campaign left.”

Kobach is running for the U.S. Senate seat being vacated by Republican Sen. Pat Roberts, who is retiring. In the primary, he is up against Rep. Roger Marshall — and the GOP strategists who fear that Kobach, if nominated, would lose to a Democrat are rallying around Marshall aggressively and hoping to God he becomes the nominee. Scott Reed, a political strategist for the U.S. Chamber of Commerce, told Politico, “A Kobach victory would definitely put the Republican majority in jeopardy because it would add another state that would need serious resources.”

According to Steven Law, president of the Senate Leadership Fund, Senate Minority Leader Chuck Schumer is hoping that Kobach becomes the nominee because he believes that Kobach would be easier to defeat than Marshall. Law told Politico, “The latest ad from Schumer’s Kansas pop-up PAC shows that they want to start the general election early by going after Marshall, and we aren’t going to let them get the jump on us.”