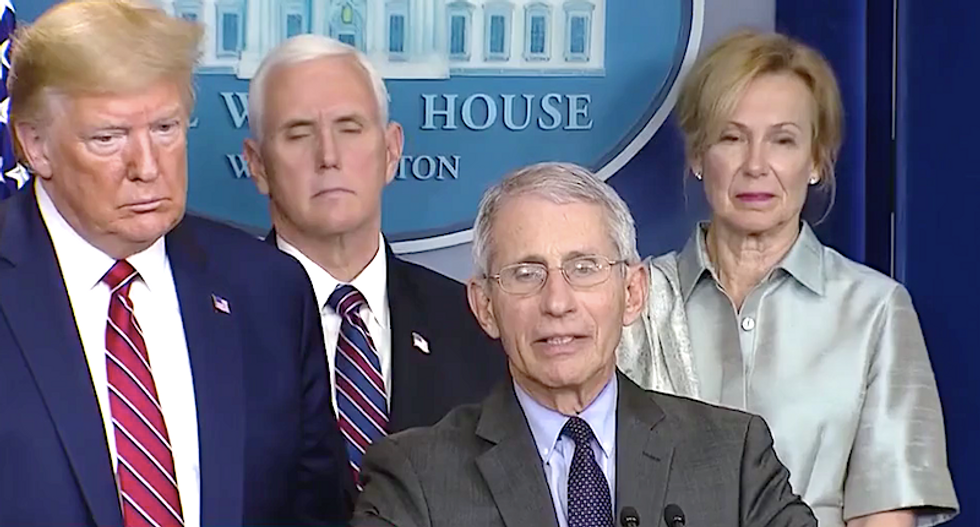 Surely everyone could agree that the priority during a global pandemic should be to save lives. That hasn't been the case.

According to the Washington Post, an adviser to the Department of Health and Human Services accused the Center for Disease Control (CDC) of trying to “undermining the president” by releasing factual information about the risks of getting the virus while pregnant.

The report cited an "ominous" June 28 email the CDC director got.

"The adviser, Paul Alexander, criticized the agency's methods and said its warning to pregnant women' reads in a way to frighten women . . . as if the President and his administration can't fix this, and it is getting worse,'" said the Post.

The worst states are reporting over 10,000 cases daily for an astounding number of over 57,000 total new cases in the United States on Thursday. And as these numbers continue to spike, medical and public health experts are being pressured by Trump's White House to downplay the dangers of the coronavirus. The Post explained it is all an effort to rebuild the economy in the few months left before the November election.

"Like all of the CDC's reports, the analysis itself noted several limitations," said the Post. "One key one that researchers acknowledged was that they did not have data to indicate whether the pregnant women were hospitalized because of labor and delivery, or because they had COVID-19."

The health official said that Trump's team is so desperate that they are "seeing political boogeymen where there aren't any,"

"It could feed the fire to limit the flow of scientific data and communication to the general population," the official told the Post. "People are getting sick and dying. Can we just focus on the science?"

The email from Alexander claimed there is a lack of data about why pregnant women were hospitalized.

"The CDC is undermining the President by what they put out, this is my opinion and sense, and I am reading it and can see the subtle and direct hits," he wrote.

Trump loyalist Michael Caputo, who now works at the Department of Health and Human Services, agreed with Alexander's assessment, calling the CDC's record "spotty" and "questionable."

"In many cases over the years, regardless of administration, the CDC has undermined presidents and themselves," Caputo said. "Who says the CDC is the sole font of wisdom when it comes to detecting and fighting deadly pathogens?"

"I don't think this is frightening women," said OB-GYN chief Denise Jamieson, at Emory University and Emory Healthcare. True, the report "suffers from completeness of data," however, pregnant women are more at risk of having serious diseases and the information is "really important" facts that they deserve to have.