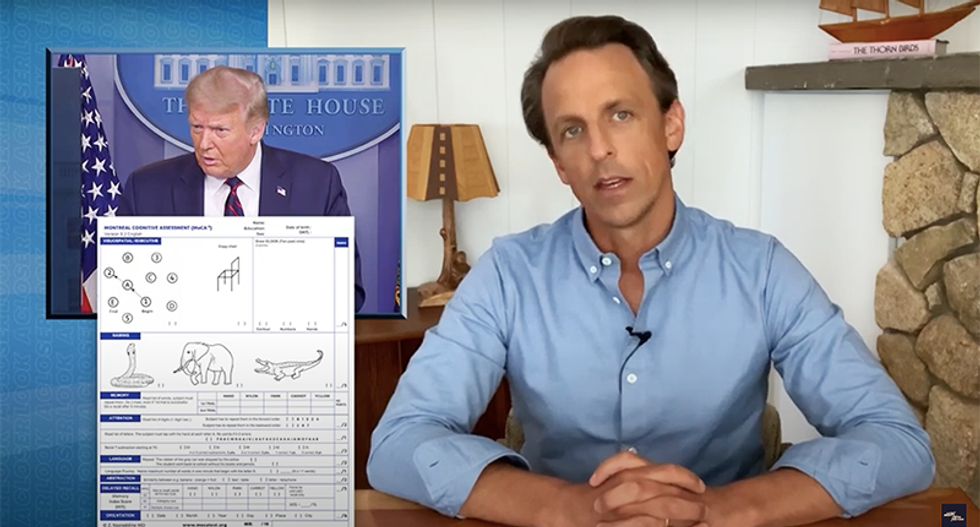 "Late Night" host Seth Meyers is astounded by the bigotry of low expectations as the media gushes over President Donald Trump, who finally decided after six months that the coronavirus pandemic is real.

Reading off headlines from outlets like Bloomberg, ABC News and CNN for blubbering about Trump's new "tone." After four years of questions about when Trump would "pivot" to be presidential, he's finally achieved it after his staff handed him a statement to read.

"Good Lord," said Meyers. "I really think you could duct tape a spatula to a Golden Retriever's paw, and half of the media would say, 'Oh my God! That dog's a chef!' What's wrong with you guys? How can you keep falling for this? It's been five years of this BS, and every time President Werewolf over here manages to novocaine his way through a prepared statement without passing out at the podium, you act like he's a totally different person all of the sudden."

Meyers then corrected himself, noting that Trump is more like a reverse werewolf because he terrorizes people all the time, and only on the full moon does he offer an apology.

"Look, 74-year-olds don't change unless they're characters in a Clint Eastwood movie where a bunch of bank robbers go to space," Meyers continued. "Look, you know Trump is going to steal his phone back and tweet some racist nonsense, right? He repeatedly used a racist term for the coronavirus in the briefing. You don't even need to wait until he tweets. He morphed back into the real Trump mid-press conference."

He compared the video of Trump saying, "it will, unfortunately, probably get worse," to Trump, then claiming, "the virus will disappear."

"My God, I'd say he suffers from short term memory loss, but then again, he aced that cognitive test. So, what do I know?" Meyers quipped.

See the full segment below: