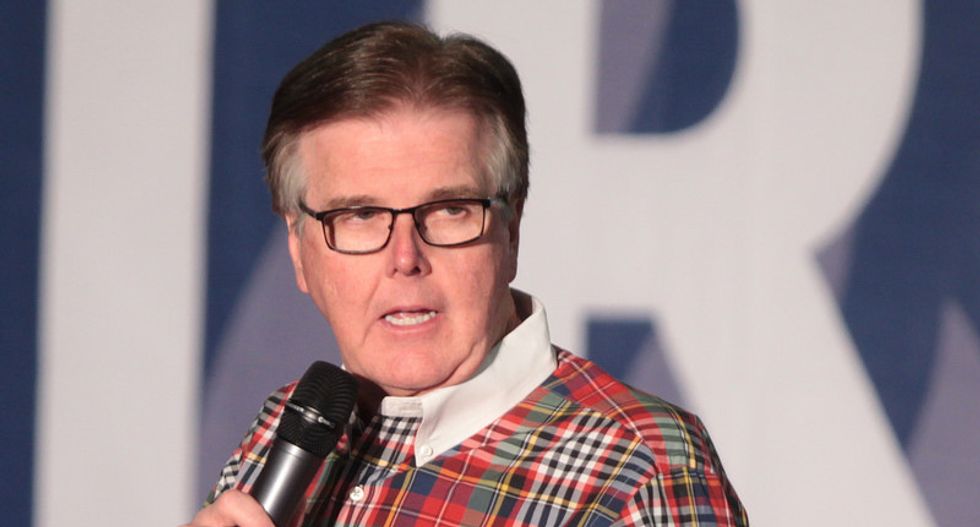 Dan Patrick speaking with supporters of U.S. Senator Ted Cruz after the results of the 2016 Nevada caucuses at his caucus night party at the Bill & Lillie Heinrich YMCA in Las Vegas, Nevada. (Gage Skidmore/Flickr)

In light of the decision to go forward with an in-person convention with a new mask requirement, two sponsors announced they would drop out. Houston Mayor Sylvester Turner said he was hopeful that the organization would still reconsider.

The Texas GOP's executive committee voted Thursday night to proceed with plans to hold the party’s in-person convention in Houston later this month.

The State Republican Executive Committee, a 64-member body that serves as the governing board of the state party, voted 40-20 to approve the resolution supporting the in-person gathering. Thursday’s vote comes as the state grapples with a surge of coronavirus cases, with Houston serving as one of the country’s hot spots for the virus.

The SREC is scheduled to meet again Sunday to consider changing the party’s rules. Those rules will include a tweak that allows the party to act on an “emergency fallback contingency plan,” if necessary, to hold a virtual convention, party Chair James Dickey told members as he kicked off Thursday’s virtual meeting.

The convention, scheduled for July 16-18, will be held at the George R. Brown Convention Center, where roughly 6,000 people are expected to attend.

Thursday’s vote came hours after Gov. Greg Abbott ordered most counties in Texas to require masks in public — a notable turnaround for a governor who spent months resisting calls for such a requirement. Under Abbott’s latest action, Dickey said during Thursday’s meeting, convention attendees would now be required to wear masks for most of an in-person event.

Over the past week, demands have mounted for the party to cancel plans for an in-person convention, with some Republicans stating they would not attend such an event due to safety concerns. Others have also cited concerns about the optics of attending a large gathering while small businesses in their districts remain shuttered under the governor’s orders.

Meanwhile, a faction of activists has argued that canceling an event focused on selecting delegates for the national convention and voting on the party’s platform, among other things, would not reflect well on a party that dubs itself the party of personal responsibility. Some have also suggested that a virtual convention could disenfranchise certain delegates.

On Tuesday, the party’s plans for an in-person convention looked increasingly uncertain, when the Texas Medical Association, the state’s largest medical group, called on the party to cancel the event, a reversal that came just one day after The Texas Tribune reported on TMA’s sponsorship of the convention.

After Thursday night's vote, TMA announced it had withdrawn as an advertiser to the convention, arguing that face masks alone at such a large gathering were not enough.

"With or without masks, an indoor gathering of thousands of people from all around the state in a city with tens of thousands of active COVID-19 cases poses a significant health risk to conventiongoers, convention workers, health care workers, and the residents of Houston," Diana Fite, the group's president, said in a statement. "We are concerned not only for the City of Houston but also for the communities to which the delegates will return, giving the virus easy transportation to parts of Texas that have far fewer cases."

"In light of the decision to go forward with an in-person Republican State Convention with over 6,000 attendees in close proximity, @TXCraftBrewers has decided to withdraw our sponsorship of the @TexasGOP Convention in Houston," the group tweeted.

On Friday, Houston Mayor Sylvester Turner said he was hopeful that the SREC would reconsider and take the convention virtual.

"At the very minimum, masks will be a requirement for attendance and service. However, it is also my hope that over the next several days, the party's leadership will reconsider in view of the rising number of positive COVID-19 cases, increased hospitalizations, and shortage of ICU beds," he said.

Thursday’s roughly three-hour meeting included a vibrant discussion about what plans related to the convention, if any, should change. Members went back and forth, making their cases for why the convention should go virtual or remain as scheduled.

At one point, one member offered a motion that would have required delegates to test negative for the coronavirus before being allowed to attend the convention.

“What a load of horse shit,” one member could be heard saying on the livestream before the motion was ruled out of order.

The SREC did not get much guidance from Abbott, at least publicly, ahead of its Thursday evening meeting. In a TV interview less than two hours before the meeting, Abbott declined to take a position on whether an in-person convention should move forward, deferring to the SREC while speaking generally about putting health and safety first.

"One thing that’s so important is we obviously have so many people who would be attending who would be coming from a variety of locations across the state of Texas," Abbott told KRIV in Houston. "These people are very valuable, very important, to the Republican Party. My top concern for them is their health and safety. The last thing that I would want to have happen is for any of them to contract COVID-19 or worse, lose their lives over it."