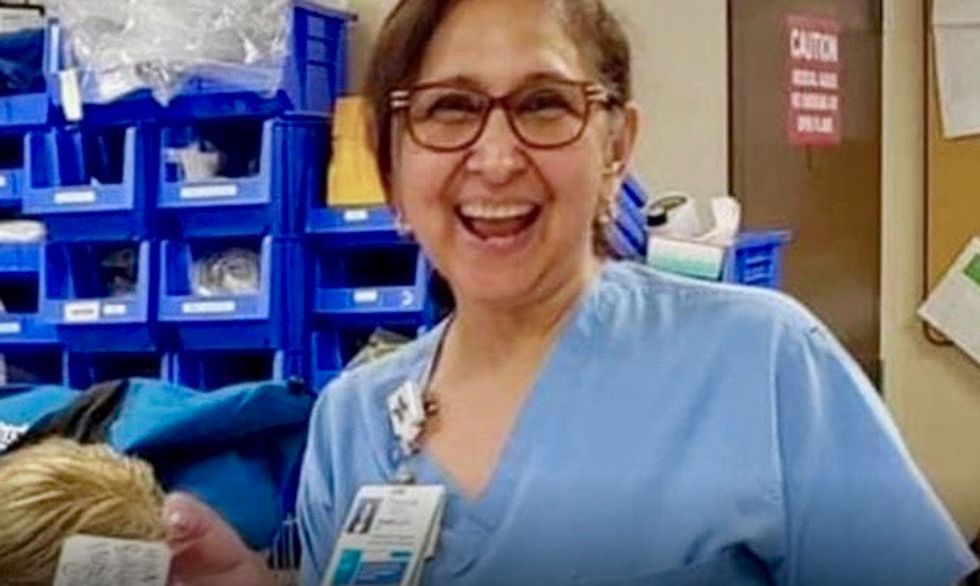 "Your inaction and active denial of the devastation from Covid-19 has made it clear that the people dying, and the families they're leaving behind, are just numbers to you," Fiana Tulip wrote in an op-ed directed at Texas Gov. Greg Abbott.

A Texas woman channeled her anger over her mother's death from Covid-19 into an obituary in the Dallas Morning News Tuesday, condemning "the carelessness of the politicians" who refused to lead the country safely through the deadly pandemic—choosing instead to push for an end to lockdown measures and downplaying the threat despite the repeated warnings of public health experts.

Fiana Tulip wrote in the newspaper of her 64-year-old mother, Isabelle Papdimitriou, that "like hundreds and thousands of others, she should still be alive today... Her death could have been prevented."

Papadimitriou died July 4, about a week after developing symptoms of Covid-19.

"Her undeserving death is due to the carelessness of the politicians who continue to hedge their bets on the lives of healthcare workers through a lack of leadership, through a refusal to acknowledge the severity of this crisis, and through an inability and unwillingness to give clear and decisive direction on how to minimize the risks of the coronavirus."

A respiratory therapist at a hospital in the Dallas area, Papadimitriou was on the frontlines of the coronavirus pandemic. Knowing her hospital was at capacity when she got sick with a high fever and severe cough, she opted to fight off the illness at home and was not taken to the hospital until it was too late to save her life.

Papadimitriou's death exemplified the neglect with which politicians including President Donald Trump and Texas Gov. Greg Abbott have treated the healthcare workers who have saved thousands of lives during the pandemic, Tulip wrote in the obituary.

"Her undeserving death is due to the carelessness of the politicians who continue to hedge their bets on the lives of healthcare workers through a lack of leadership, through a refusal to acknowledge the severity of this crisis, and through an inability and unwillingness to give clear and decisive direction on how to minimize the risks of the coronavirus," the obituary reads.

As CNN reported Tuesday, Tulip is one of a growing number of Americans who are publishing "honest obituaries" about their loved ones who have died as a result of the coronavirus pandemic. The grassroots group Marked by Covid is helping people to write such obituaries, "collecting stories and elevating the truth about Covid-19 in hopes of saving others."

Earlier this month, Marked by Covid founder Karen Urquiza wrote in an obituary for her father, Mark Anthony Urquiza, that he "should not have died from Covid-19" and blamed politicians for "jeopardizing the health of brown bodies through clear lack of leadership."

Tulip followed her mother's obituary with an op-ed in the Austin American-Statesman, publicly inviting Abbott to her mother's funeral to witness "that we are unable to even hug each other in our grief because my brother tested positive for Covid-19 the day my mother died. Due to the virus we are limiting the number of guests at the service, mandating everyone wear masks, keeping households six feet apart, and having hand sanitization on site."

Tulip linked her mother's death to Abbott's signing of Executive Order No. GA-18, which barred counties from issuing their own safety protocols, such as mask-wearing mandates, in the absence of guidance at the state level.

"There is no doubt that poor policy and terrible leadership were responsible for her death," wrote Tulip in the op-ed. "Other states and countries have managed to slow their spread by implementing simple policy measures such as mask-wearing. Texas has recently reported more than 10,000 new coronavirus cases a day—more than any European country had at the height of its outbreak."

Abbott issued the directive on April 27 and lifted Texas's stay-at-home order just three days later, making the state's shutdown one of the shortest in the country in the first weeks of the pandemic. Abbott allowed the state's economy to begin reopening even as case numbers rose and officials missed benchmarks for coronavirus testing.

Weeks after issuing the executive order, Abbott reversed course in June and pleaded with Texans to wear face masks in public, but throughout much of the state, the damage of Abbott's mixed messaging appears to have been done. According to research into mask-wearing by the New York Times, in many counties in central and northern Texas, only about 50% or fewer residents report that they comply with mask-wearing guidance.

Abbott finally ordered bars to close again and restaurants to reduce their capacity in mid-June, as case numbers in Texas skyrocketed. In early July the governor again asked Texans to stay home and said face coverings would be required in counties with more than 20 cases.

Papadimitriou died two days after the order was put back in place.

"As hospital beds filled up across the state, you finally issued a statewide mask order on July 2, too late to help my mother," wrote Tulip.

"There will be far more deaths of Texans than there needed to be. Your inaction and active denial of the devastation from Covid-19 has made it clear that the people dying, and the families they're leaving behind, are just numbers to you," she continued. "As of Monday, 4,020 people had died from Covid-19 in Texas—4,020 lives that mattered. My mother mattered."