The GOP is a suicide cult 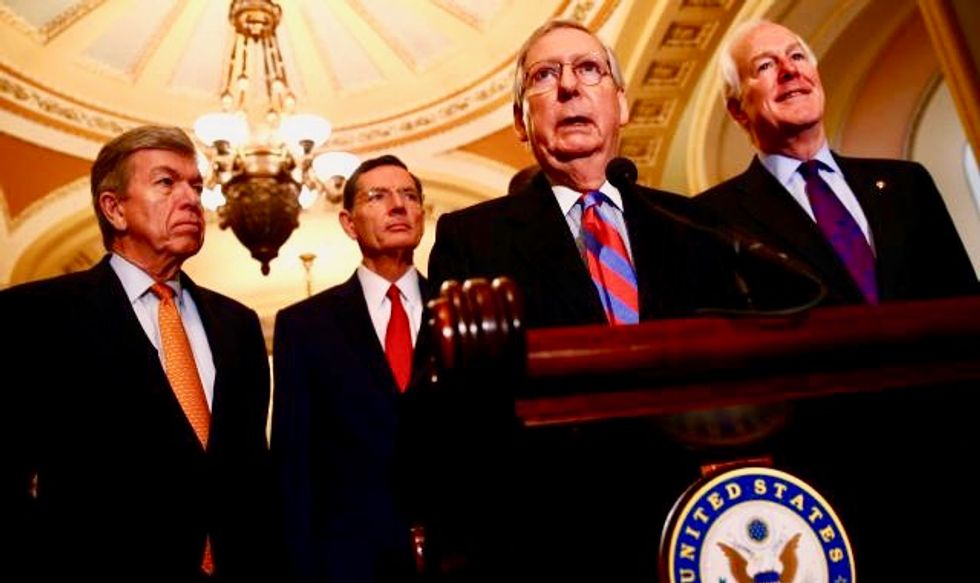 Back in March, we argued that Donald Trump had become the charismatic leader of the dumbest suicide cult ever. There were fewer than 500 confirmed cases of Covid-19 at the time, but it wasn't difficult to see the trajectory we were on at even that early date. At the time, we were commenting on the President's* repeated claims that the whole thing was a big hoax and polls showing that Democrats were twice as likely as Republicans to say they were taking steps to avoid becoming infected.

As of this writing, after another record-setting day of 66,000 cases being confirmed on Friday, we're at 3.25 million and there's no end in sight. While the pandemic initially hit Democratic-leaning areas, that trend has reversed since Trump's push to re-open on Memorial Day. The Associated Press published  a handy chart at the end of June: 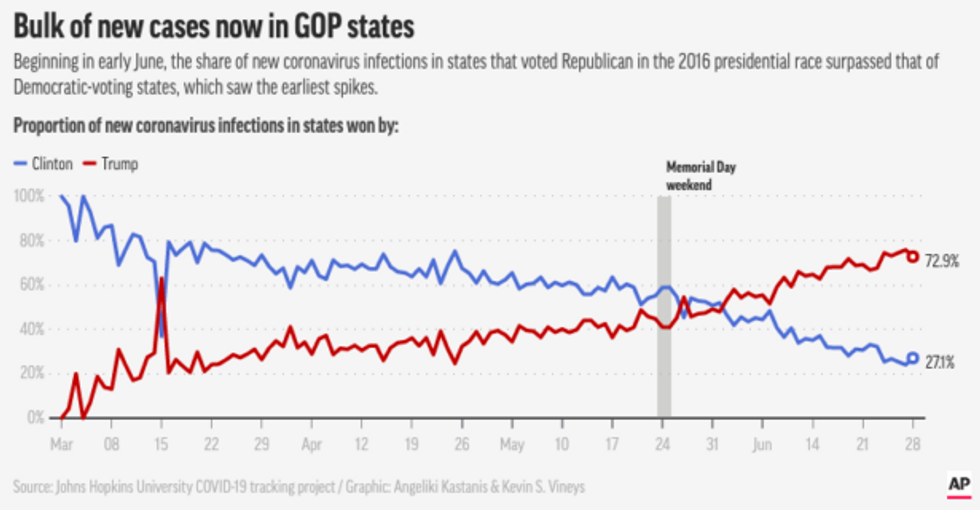 The Los Angeles Times reported last week that, "with the COVID-19 pandemic bearing down on red states that had previously been spared, officials in these hot zones are finding their efforts to combat the outbreak undermined by the leader of their own party."

Many GOP politicians followed the president’s lead in the early months of the crisis by embracing a swift reopening of their economies. Now, as infection rates are surging in several states, these same leaders are ratcheting up their efforts to curb the contagion. But doing so while not contradicting Trump, who continues to forgo wearing a mask in public and broadly downplays the threats of the virus, has proven difficult.

The story goes on to describe how Republican officials are facing an onslaught of harassment and even death threats in response to any effort to require people to wear masks in public or take other measures to contain the outbreak.

Meanwhile, we have other Republican officials urging people to stop getting tested.

Twenty-six state legislators in Mississippi have contracted the disease after weeks of "flout[ing] mask recommendations inside the state Capitol," where according to CNN, "desks are packed tightly together, and members gather closely to communicate with their colleagues."

And from The Instant Karma File, a county commissioner in Florida is in critical condition with the disease just days "after voting against a motion to mandate masks for county employees last week."

Again, this is all coming from the top. Politico reported this week that in Trump's Virginia campaign headquarters, staffers are packed tightly together and told that they are only required to wear masks outside the office in case they're spotted by reporters. “You get made fun of, if you wear a mask,” said one person. “There’s social pressure not to do it.”

And, after Trump's consistent resistance to using the Defense Production Act to compel companies to produce more PPE, we're now facing a second shortage. And in the midst of all of this chaos, Trump, having claimed that his own regime's guidelines for re-opening schools are too onerous, is attempting to coerce state and local governments into packing kids into classrooms for in-person instruction this fall with no plan to do so safely. It's a total clusterfuck.

And the worst is likely yet to come. On Friday, Dr. William Haseltine, a former professor at Harvard Medical School, told CNN, "all people who study these viruses think that the summer is the quiet time. Think about that. This is the quiet time for coronavirus. If this is the quiet time, I hate to think what winter is going to be like this year."

In related news, a regime that has made xenophobia its guiding light has turned Immigration and Customs Enforcement (ICE) "into a domestic and global spreader of the virus," according to an investigation by The Marshall Project and The New York Times. Despite "limited testing," the agency has detained at least 3,000 people who tested positive for the disease, and they've refused to quarantine them, flown them around the US and to other parts of the world and under "pressure from the Trump administration" has pushed "countries to take in sick deportees."

The New York Times reports that when Trump came to power, the Department of Homeland Security relentlessly targeted immigrants, but it has since expanded its focus to become a full-service shop for wingnuttery.

As his re-election campaign turned to a “law and order” theme, the department’s border agents, immigration officers and drones were sent to surveil cities crowded with anti-racism protesters.

Then, in the past few weeks, with the commander in chief striking up a divisive defense of statues and monuments, the department redeployed some of its officers again, this time to guard granite and steel sculptures and property in Seattle; Portland, Ore.; and Washington, D.C.

And on each move, the president has found the warm embrace of Chad F. Wolf, his acting homeland security secretary.

Dozens of foreign nationals working as journalists in the U.S. for Voice of America, the federal government's international broadcaster, will not have their visas extended once they expire, according to three people with knowledge of the decision.

Those people — each with current or past ties to the agency — said the new CEO of the U.S. Agency for Global Media, Michael Pack, signaled he will not approve the visa extensions...

The foreign journalists affected by the visa decision are particularly valued for their language skills, which are crucial to VOA's mission as an international broadcaster covering news in many countries that do not have a free or robust press.

Over 100 staffers could face deportation, some of them to countries with hostile governments that might retaliate against them for their work.

For years, we've documented Education Secretary Betsy DeVos's relentless efforts to deny students who have been ripped off by private colleges relief authorized by Congress.

The New York Times reports that she is now "denying huge batches of relief requests from students whose schools defrauded them. Even those who aren’t denied are getting very little — or sometimes nothing."

Years of delays and attempts to cut the relief borrowers can receive have prompted dozens of lawsuits against the department. Now, under pressure from federal courts to deal with hundreds of thousands of unresolved claims, the Education Department is processing them — and saying no. More than 45,000 rejection notices have been sent in recent months, according to agency data.

Trump's National Labor Relations Board (NLRB) is considering rolling back or eliminating a rule that prevents employers from attempting to decertify a union for three years after a contract is signed. The New Deal-era law barrs deep-pocketed companies from holding election after election until their workers eventually kill their union. [Reuters]

"Forty lobbyists with ties to President Donald Trump helped clients secure more than $10 billion in federal coronavirus aid, among them five former administration officials whose work potentially violates Trump’s own ethics policy," according to the AP.

In 2017, an NSC staffer named Rich Higgins was removed from his post after writing a "xenophobic screed alleging that opposition to the Trump administration and its policies was part of a plan to implement 'cultural Marxism' by a cabal of 'deep state’ actors, globalists, bankers, lslamists, and establishment Republicans' using 'attack narratives' which 'operate in social media, television, the 24-hour news cycle in all media, and are entrenched at the upper levels of the bureaucracies and within the foreign policy establishment.'" according to The Independent. Now, he's being brought back into the fold--this time in a senior position at the Department of Defense.

The push to install loyal Trumpists and Flynn acolytes in top Pentagon roles... has alarmed current and former NSC and Defense Department officials, who say the situation is emblematic of an administration that encourages unhinged conspiracy theorists at the expense of those loyal to the Constitution....

Another former NSC official who served under the Trump administration said Higgins’ memo was “consistent with the ideology” of the administration and the composition of NSC leadership under Flynn, but added that it was still surprising how “straight-up appalling and bizarre” it was when they actually read it.

“It's like these individuals are living in a complete alternate reality,” they said, adding that the idea of such people still serving in government was “terrifying” and the fact that Higgins’ ideas made it into a formal memo that reached Trump’s desk “shows how dangerous somebody like that can be”....

The NSC official — who overlapped with Higgins at the NSC — said the threat posed by people like Higgins could turn into a physical threat to the nation’s security.

“His racist views, delusions, and conspiracies, coupled with the fact that he could have the country’s defense forces and military capabilities at his fingertips, is a serious national security threat,” they said. “In my perspective, it's the same cocktail that results in violent, racist groups like the KKK, and it’s really worrisome that Trump is trying to push someone like him.”