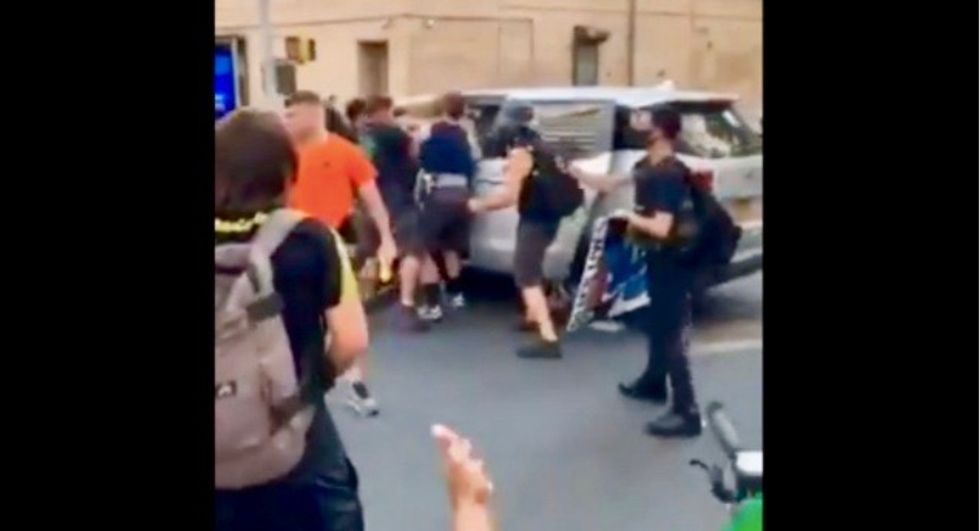 "Our civil liberties are on the brink," said Rep. Alexandria Ocasio-Cortez. "This is not a drill. There is no excuse for snatching women off the street and throwing them into unmarked vans."

Plainclothes officers from the New York City Police Department on Tuesday snatched an 18-year-old protester off the streets, threw her into an unmarked minivan, and sped away without explanation, a disturbing incident that immediately drew comparisons to the authoritarian tactics recently used by federal agents in Portland, Oregon.

"Violently forcing protesters into an unmarked van are the actions of a police force that think they can act with impunity. We won't allow this in our city."

One video shows several officers dressed in shorts and T-shirts rushing out of an unmarked Kia minivan, grabbing a demonstrator from the middle of the street, and forcing her into the van as NYPD officers with bikes formed a barrier around the vehicle. The protester was later identified by friends as an 18-year-old trans woman named Nicki.

"Suddenly there was an unmarked grey van that moved out in front of us that had been waiting for us," one witness told Gothamist. "Four guys jumped out and a line of police bicycles came out from down the block—we hadn't seen them. They pushed us back. They grabbed Nicki like she was a rag doll."

NYC is taking after Portland - a trans femme protestor was pulled into an unmarked van at the Abolition Park protes… https://t.co/g2VZOGAnsM
— michelle lh࿊࿊q (@michelle lh࿊࿊q) 1595978515.0

"Our civil liberties are on the brink," Rep. Alexandria Ocasio-Cortez (D-N.Y.) tweeted in response to the incident. "This is not a drill. There is no excuse for snatching women off the street and throwing them into unmarked vans. To not protect our rights is to give them away. It is our responsibility to resist authoritarianism."

In a statement posted to Twitter late Tuesday after the officers' actions sparked widespread condemnation, the NYPD claimed the "woman taken into custody in an unmarked van was wanted for damaging police cameras during five separate criminal incidents in and around City Hall Park."

"When officers from the Warrant Squad took the woman into custody in a gray NYPD minivan this evening, they were assaulted with rocks and bottles," the NYPD said, an account witnesses dismissed as completely false. "The Warrant Squad uses unmarked vehicles to effectively locate wanted suspects."

Clara Kraebber, a 20-year-old Oxford student who witnessed the incident, told Gothamist that "none of that happened whatsoever," referring to the NYPD's claim that demonstrators threw rocks and bottles at the officers. Kraebber said officers indiscriminately pepper sprayed demonstrators as the cops shoved Nicki into the  unmarked van.

"We literally turned the corner and were met with a line of police who attacked us without warning," said Kraebber.

The New York Civil Liberties Union, the New York state affiliate of the ACLU, called the NYPD's behavior "horrifying and indefensible" and said it is investigating.

"We're looking into the incident that happened tonight, but one thing is for certain: violently forcing protesters into an unmarked van are the actions of a police force that think they can act with impunity," the group said. "We won't allow this in our city."