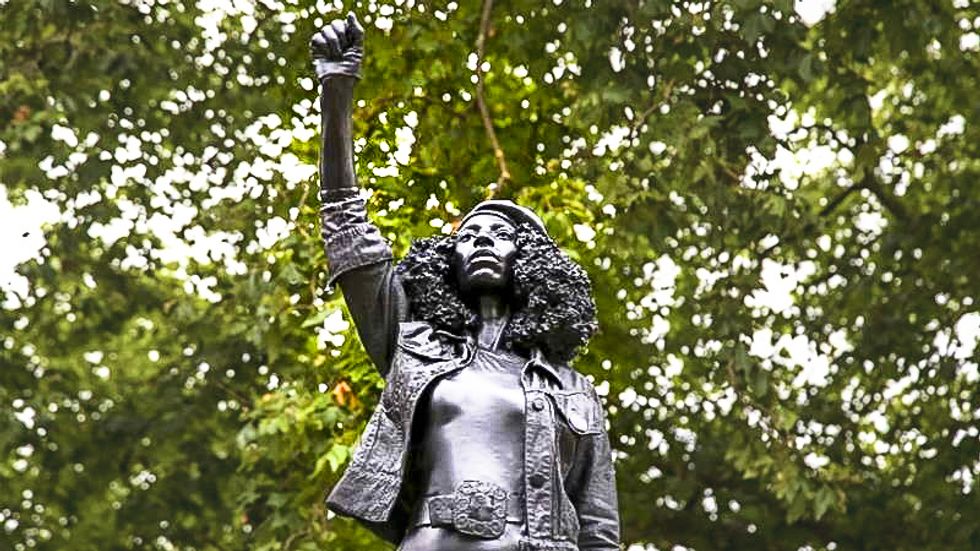 A statue of a Black Lives Matter activist has come under fire by white people after it replaced a memorial for slave trader Edward Colston.

The new statue of Black Lives Matter protester Jen Reid was placed in Bristol, United Kingdom on Wednesday without the permission of the city council, which has suggested that it will be removed.

Reid was one of the activists who participated in toppling Colston's statue last month.

Black Lives Matter opponents took to Twitter to oppose the new statue. Many of those speaking out against the new monument had profile photos indicating that they are white.

"That black statue in Bristol is an absolute disgrace and it needs to be taken now!" one man wrote.

"Who the hell do they think they are?" the commenter complained. "This is the most appalling white erasure. They broke the law in tearing down Edward Colston and broke the law again in putting up this hideous thing. Wake up people, our country is being systematically taken away from us."

"Tear down history and replace it with trash," one woman posted.

One man asserted that minorities "are dictating our history."

Multiple people suggested that white people should "tear down" the statue as payback for the removal of white statues.

@DVATW Absolutely sickening. Who the hell do they think they are? This is the most appalling white erasure. They br… https://t.co/KcAzxCnzSh
— Jonathan Windsor (@Jonathan Windsor) 1594817557.0

So we tear down history and replace it with trash? Edward Colston statue replaced with one of a Bristol protester https://t.co/7OhwIKuOyU
— Cindy Stone (@Cindy Stone) 1594817682.0

@Holbornlolz Made a tiny move against this statue will be a sacrilege for the medias, they are leading and inflate… https://t.co/XefMad1pqM
— Paulsoueu (@Paulsoueu) 1594820759.0

@SteveForTheDeaf @Channel4News The life of Edward Colston was culturally relevant too. It marked something people… https://t.co/m42RBp7pUk
— WalkingBush 🇳🇱✡🌱 (@WalkingBush 🇳🇱✡🌱) 1594826191.0