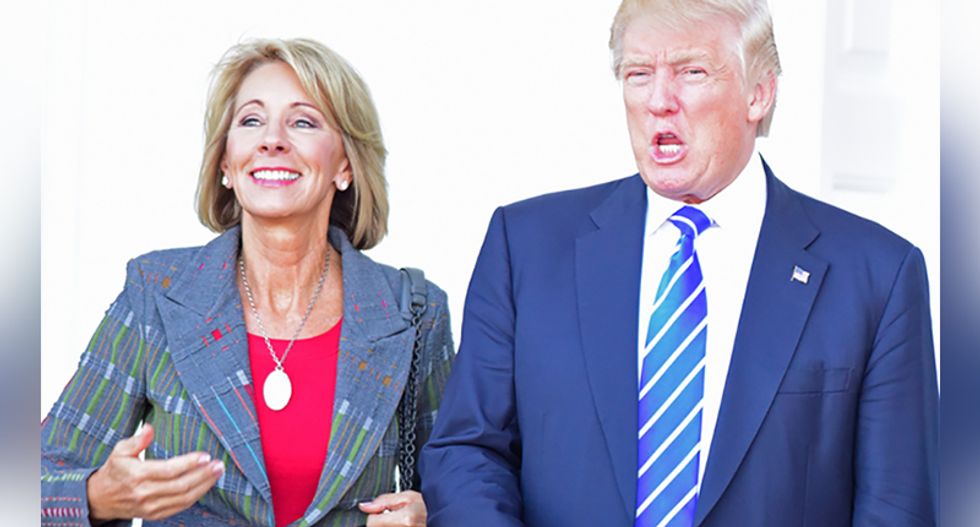 "By trying to bury what the CDC recommends, Trump is betraying every student, teacher, and parent in this country. Shame on him. Shame on those who enable him."

The leader of one of the largest teachers' unions in the U.S. accused President Donald Trump over the weekend of "trying to bury" federal guidelines warning that fully reopening schools and universities in the fall poses a high risk of spreading Covid-19 and endangering the health of students, faculty, and parents.

A 69-page packet (pdf) of Centers for Disease Control and Prevention materials obtained by the New York Times and labeled "For Internal Use Only" cautions that the "more people a student or staff member interacts with, and the longer that interaction, the higher the risk of Covid-19 spread."

"Trump suppressed a CDC report that concluded 'fully opening schools and universities remained the highest risk for the spread of coronavirus. Trump, Pence, DeVos had this report and said the exact opposite."

The documents, many of which had already been posed online, warn that "full-sized, in-person classes" present the "highest risk" of spreading coronavirus compared to virtual courses and small classes in which students remain at least six feet apart at all times.

The packet, according to the Times, "was among material for federal response teams that are being dispatched to hot spots around the country for short periods of time."

While it's "unclear whether Mr. Trump saw the document," the Times reported, "what is clear is that federal health experts are using a road map that is vastly different from what Mr. Trump wanted."

"Trump suppressed a CDC report that concluded 'fully opening schools and universities remained the highest risk for the spread of coronavirus," Weingarten tweeted Saturday. "Trump, Pence, DeVos had this report and said the exact opposite. His intentional lies will endanger thousands."

By trying to bury what the CDC recommends, Trump is betraying every student, teacher and parent in this country. Sh… https://t.co/78chz5sGSR
— Randi Weingarten (@Randi Weingarten) 1594505095.0

Last week, Trump complained on Twitter that non-binding school reopening guidelines offered by the CDC—which recommends that students maintain six feet of distance from each other and wear face coverings—are "very tough" and "expensive."

In an apparent attempt to mollify the president—who also threatened to cut off funding to schools that don't reopen—Pence said during a press briefing last Wednesday that the CDC plans to release new documents "giving even more clarity on the guidance going forward." CDC director Robert Redfield said in an interview the following day that the new documents would not alter the agency's existing guidelines.

During an interview Sunday morning on CNN's "State of the Union," DeVos repeatedly refused to say whether schools should follow the CDC's reopening guidelines and claimed "there's nothing in the data that suggests that kids being in school is in any way dangerous."

Rep. Ayanna Pressley (D-Mass.) ripped DeVos for offering "no plan" to safely reopen schools as "teachers, kids, and parents are fearing for their lives."

"You point to a private sector that has put profits over people and claimed the lives of thousands of essential workers," Pressley tweeted. "I wouldn't trust you to care for a house plant let alone my child."