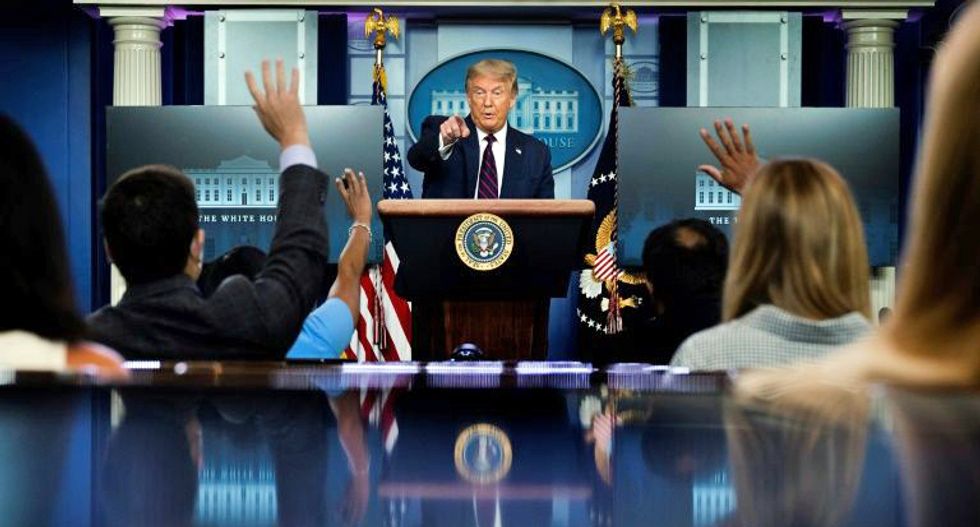 Reeling from polls predicting defeat in November's election, President Donald Trump struck a newly serious tone on the coronavirus crisis Tuesday, acknowledging that a disease he has frequently played down would "get worse."

"Some areas of our country are doing very well," Trump said at his first formal White House briefing on the pandemic in almost three months.

"Others are doing less well," the president said. "It will probably, unfortunately get worse before it gets better."

The return to presidential coronavirus briefings -- abandoned in late April after Trump drew ridicule for musing on the potential for injecting coronavirus patients with household disinfectant -- was part of a concerted bid to take back control of the message.

After an erratic US response, some 140,000 deaths, and now dramatic surges in new cases across the south and southwest, polls show two thirds of Americans mistrusting Trump's leadership on the issue.

The United States has recorded more than 60,000 new cases of COVID-19 for eight consecutive days.

Polls also show his response to the pandemic driving voters strongly in the direction of opponent Joe Biden in the presidential election, due in just over 100 days.

While Trump makes his latest pivot, Congress is starting to negotiate another large-scale economic relief bill to try and prop up an economy devastated by mass unemployment and shuttered businesses.

An agreement appears some way off, but in Europe, EU leaders emerged from a marathon four-day and four-night summit on Tuesday to celebrate what they boasted was their own historic rescue plan.

German Chancellor Angela Merkel said the 750-billion-euro ($858-billion) deal was equal to "the greatest crisis" in EU history. Spanish Prime Minister Pedro Sanchez hailed "a Marshall Plan for Europe" that would boost his country's economy by 140 billion euros over the next six years.

Having long played down the seriousness of the disease and repeatedly promoted pet medical theories on how it might be combatted, Trump hopes that his more somber, realistic approach will change the dire headlines.

Despite refusing for months to be photographed wearing a mask, he now urged Americans to follow doctors' recommendations in using face coverings as a vital barrier to the virus' spread.

"We are asking everybody that when you are not able to socially distance, wear a mask," he said.

And he touted good news on vaccine development which he said would be completed "a lot sooner than anyone thought possible."

But Trump repeated his frequent assertion that the virus will somehow "disappear."

He also raised eyebrows by coming to the podium alone, rather than with medical leaders. His top infectious diseases expert, Anthony Fauci, who has been attacked by Trump's team for his often less than upbeat prognosis, was not even invited.

Trump, a lifetime salesman and a veteran of reality television, often appears more comfortable in front of the cameras than in the more formal settings of traditional presidential life.

Although he constantly complains about unfair press coverage, he gives more press conferences and jousts with journalists more often than probably any other Oval Office occupant.

He said he will continue the early evening primetime television briefings, although possibly not every day.

Tuesday's version was succinct at less than half an hour and he mostly kept to the White House talking points. But it is unknown whether Trump will resist using the platform in the future to return to his more usual divisive rhetoric.

He trails Biden in all polls and is retooling his campaign to an ever-darker message in which he tries to paint the Democrat as backed by anarchists and Venezuelan-style socialists.

On one hand there was the upbeat tweet: "Tremendous progress being made on Vaccines and Therapeutics!!!"

And on the other, the evidence-free, alarming claim -- shocking for a sitting president -- that the election in which he is forecast to lose will be rigged.

"Mail-In Voting, unless changed by the courts, will lead to the most CORRUPT ELECTION in our Nation's History! #RIGGEDELECTION."

The global havoc from the coronavirus pandemic was underlined on Tuesday with Mexico, which has the fourth highest death toll in the world, recording its 40,000th fatality.