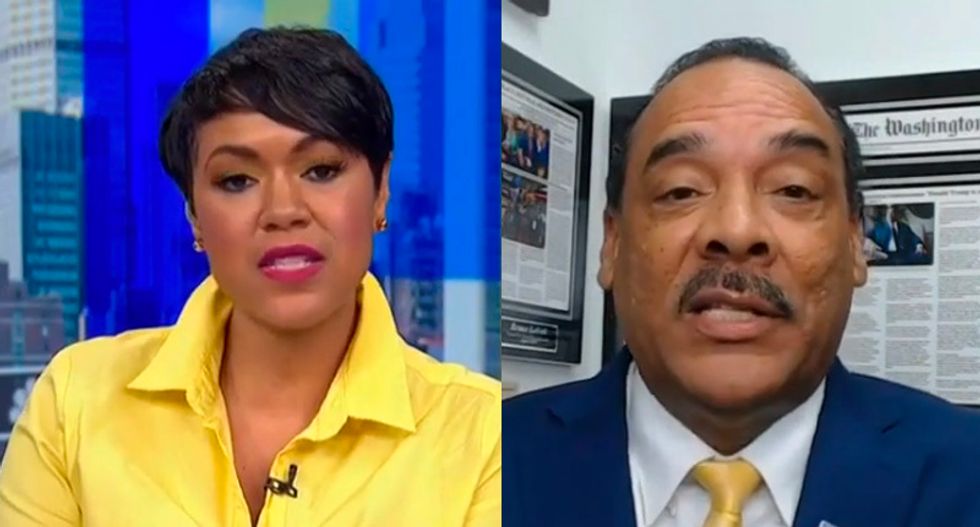 "I have to ask you, why would anybody in the Black community or people who don't support white supremacy, why would they listen to you carrying this president's water?" asked Cross.

"Listen, a lot of chatter on Twitter, a lot of opinions floating around out there, to me, it's all noise," said Levell. "The president, we came out of the lowest Black unemployment in the history of the United States, ever, recorded in my lifetime in '72. The president's been key on funding HBCU colleges for up to ten years, which is going to help your beautiful college here at Clark, where you attended, and many of my other friends who went to Morehouse and others, so that's a great plus. And the Step One Act where he signed into law in this, in which Biden put into effect, the author of the crime bill that Clinton signed, that put total mass incarceration towards our black men. So he unraveled that ... I think, respectfully, Tiffany, you know, noise, noise, noise, numbers don't lie."

"Let's start with unemployment," said Cross. "The African-American unemployment rate right now reached 16.8 percent in May this year, the highest since March 2010. Now, I will acknowledge, prior to the corona crisis, there had been a consistent downward trend which actually began under President Barack Obama, which I'm sure you know, and Obama saw the rate decline from 12.6 percent to 7.5 percent during his terms in office in 2009 from 2017."

"I know you credit him with the FIRST STEP Act," added Cross. "That was actually introduced in Congress by Congressmen Hakeem Jeffries and Doug Collins, one of the Trump acolytes in Congress. And it's called the FIRST STEP Act, because a second and third step needs to happen. We still have a very unforgiving criminal justice system, which this president seems to want to perpetuate by sending secret police snatching protesters off the street without probable cause. So, again, why should people look at somebody who looks like our skin folks, but is carrying the message from somebody who is perpetuating a system of white supremacy?"

"And that with all sincerity I say, that's a lie," said Levell. "He doesn't condone that."

"How is that a lie?" asked Cross. "He doesn't condone, what? Sending secret police to cities?"

"You know, when Barack Obama — he had eight years with Joe Biden to do something about our mass incarceration," said Levell.

"When you deflect to Joe Biden and Obama, it sounds like you don't want to address the record of the president who's in the White House right now," said Cross.