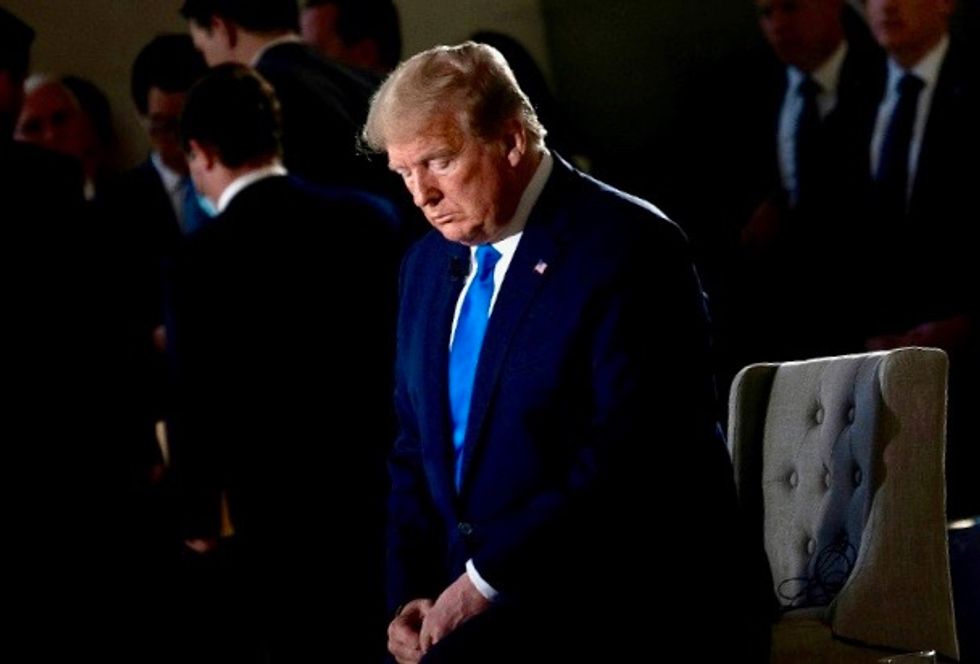 President Donald Trump did something very unexpected on Thursday: Speaking with Fox News' Sean Hannity in a live phone interview, he said that he would most likely wear a mask while visiting Walter Reed medical center over the weekend, adding that "it's fine to wear a mask if it makes you feel comfortable."

His claim was surprising inasmuch as the president has been reluctant to wear a mask publicly prior to now. Indeed, Trump's anti-mask behavior bucks the advice of public health experts, who agree that people should wear masks whenever they are in environments where they or others could be exposed to the coronavirus, not simply when they feel comfortable. Indeed, not only has Trump avoided wearing a mask until now, but he actively mocked his Democratic opponent in the upcoming election, former Vice President Joe Biden, for being responsible and doing so.

On the one hand, Trump is following a sad tradition of American presidents either taking risks with their health or covering up serious medical issues in order to seem tough. The key difference between Trump and his predecessors, however, is that they never did so in ways that directly endangered the health of the people around them or deliberately encouraged reckless behavior.

The most obvious instance of a president bucking medical wisdom resulted in that president's untimely death. When 68-year-old William Henry Harrison refused to wear either a coat or a hat while delivering his nearly two hour-long inaugural address (the longest in history) during wet and freezing weather, he contracted what his doctor described as "pneumonia of the lower lobe of the right lung, complicated by congestion of the liver." Harrison eventually died, after having served as president for only one month, making him both the shortest-served president and a cautionary tale about the dangers of not listening to your doctors.

(For what it's worth, some modern epidemiologists argue that Harrison actually died of unrelated ailments that sprung from the disease-infested marshes near the White House. Even if that is true, though, his decision to not wear a coat or hat during bad weather remains undeniably unwise.)

Yet Harrison, for all of his hubris, did not put others at risk through his behavior. A similar observation can be made about presidents who infamously concealed major health maladies: Grover Cleveland covering up an oral tumor and instead undergoing a secret operation; Woodrow Wilson suffering a debilitating stroke and yet staying in power for the last year-and-a-half of his presidency; Franklin Roosevelt refusing to disclose that he was likely to suffer a stroke as he sought reelection in 1944 (he died a few months into the term he won that year); John F. Kennedy masking the chronic pain of Addison's disease, colitis and severe back problems with methamphetamines. There are even rumors that Ronald Reagan began to succumb to Alzheimer's while he was still in office and covered it up.

None of these actions, to be clear, were ethical. Each one deprived the American people of knowledge to which they were entitled about their leaders during major crises, like the 1890s economic depression, the Great Depression, the influenza pandemic, the aftermath of World War I, the closing months of World War II, the civil rights movement and the Cold War.

"All of those situations indicate dubious ethics, but [did not] endanger other people," Allan Lichtman, a political scientist at American University, told Salon. "When Grover Cleveland goes offshore to have an operation for his cancer, he's not endangering anyone else. FDR is not dangerous. His health helmets were not contagious, and neither were Wilson's or Kennedy's as far as we know. Like Trump, they were preserving their manly image. But unlike Trump, they were not endangering the people around them or endangering the American people in their own way."

Regarding the latter observation, Lichtman stressed that one of a president's responsibilities is to lead by example, and Trump is failing to do that when he refuses to wear a mask and acts like choosing to put one on should be optional.

"It's a horrible message," Lichtman explained. "It shows he doesn't care about the health of his constituents. He cares more about his own image than he does about keeping the people around him safe." Lichtman also pointed out that "there is nothing unmasculine about wearing a mask. It is not a show of weakness to wear a mask anymore than it is a show of weakness not to drive drunk."

Salon also reached out to medical experts about the importance of wearing masks. They made it clear that there is no rational disagreement on this point: To protect yourself and those around you, you should wear one.

"Masks are important for catching droplets and microdroplet aerosols expelled while talking and breathing (not just sneezing or coughing), which was just recognized by WHO and 239 scientists," Dr. Eric Feigl-Ding, Senior Fellow at the Federation of American Scientists, told Salon by email. "Trump would be potentially at risk, if not for the daily immediate on the stop testing of everyone who approaches him in his surroundings. Anyone who tests positive is isolated and prevented from seeing him (already happened to a general who was about to visit him). Another reason that TESTING saves lives too, in addition to masks."

"Up to 40 percent of people infected with COVID-19 may have no symptoms, but by the simple act of talking have the potential of infecting others by expelling virus-containing droplets into the air," Medford told Salon by email. "Multiple scientific studies demonstrate that masks can capture many of these droplets and thus reduce the concentration of virus expelled into the air."

He added, "A recent analysis by the Institute for Health Metrics and Evaluation [IHME] at the University of Washington estimates that widespread use of mask could contribute to a reduction of  COVID-19 respiratory infections by up to 33%.  Furthermore, if 95% of the US population always wore masks in public, IHME models project that more than half the over 60,000 deaths that are predicted between now and October 1 would be avoided."

Trump's actions prior to and since the outbreak of the coronavirus pandemic have cost thousands of lives and plunged America into the worst economic crisis since the 2008 recession. In addition to disbanding the global health national security team in 2018 and calling for budget cuts to the Centers for Disease Control, he also denied that a crisis existed for more than two months after the coronavirus reached the United States and has peddled pseudoscientific cures to the general public. Indeed, the image of him refusing a mask is perhaps a fitting symbol for his approach to the pandemic.