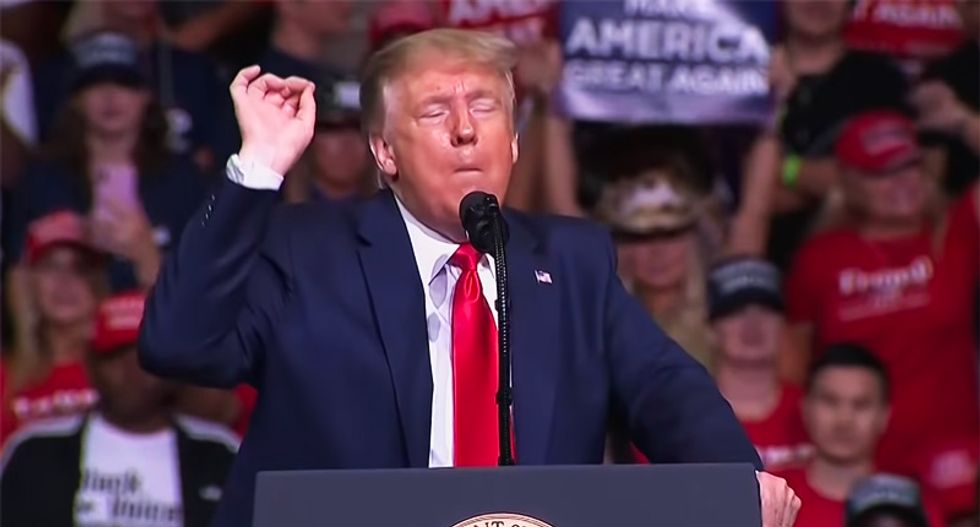 President Donald Trump was so incensed that the media learned of his staffers who caught COVID-19 in Tulsa, Oklahoma that he had a kind of inquisition for healthcare workers to investigate if they leaked the story.

The Washington Post reported Wednesday that those familiar to his reaction said that outside of the BOK center, Trump campaign staff were being tested before the event. When the information was released, they scrambled, quizzing who leaked the information about the positive cases.

Healthcare workers were "then given a different list of people to test, according to two people with direct knowledge of the events who, like others in this story, spoke on the condition of anonymity to describe internal conversations," said the Post.

Previous reports said that Trump was so furious about the news being released that when he found out the arena was only half-full, he almost turned the plane around.

Trump campaign spokesperson Tim Murtaugh said the team "performed more tests than originally anticipated" in Tulsa, and that the rally mandated that campaign employees "wore masks during the rally in accordance with [Centers for Disease Control and Prevention] guidelines.” White House spokesperson Kayleigh McEnany said that she wouldn't wear a mask at the COVID-19 hotspot.

To make a bad situation worse, the BOK Center had placed signs on seats, saying “Do Not Sit Here, Please!” to encourage rallygoers to socially distance. The Trump fans removed the signs and did as they saw fit.

Since the rally, Oklahoma has exploded with cases. The incubation period of the virus can be anywhere from 5-14 days, so the increase in cases in the state are likely attributed to the state's reopening that happened weeks prior to the Tulsa rally. Trump's advance team arrived in Tulsa a week prior to the rally, so it's unknown if they contracted it in Oklahoma, on the way to Oklahoma, or in Virginia, where Trump's campaign is located.

You can read the full report at the Washington Post.