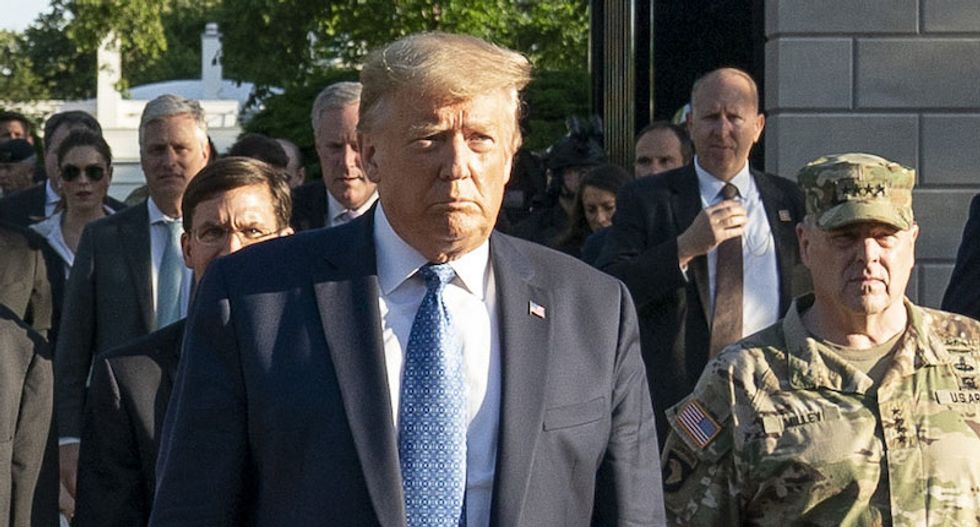 President Donald Trump abruptly ended his press briefing on Tuesday when CNN reporter Kaitlan Collins pressed him on his promotion of a quack doctor's dangerous claims about COVID-19.

On Monday night, Trump shared a video of the doctor who falsely claimed hydroxychloroquine is a "cure" for COVID-19 and that it obviated the need to wear masks or undertake other mitigation measures during the pandemic. Some of her claims were clearly wrong on their face — it's important to reduce the risk of catching diseases even if we have a cure for them — and top experts argue that the evidence continues to give little indication that hydroxychloroquine is effective against the virus. The video Trump shared was so dangerously wrong that social media platforms began removing it.

Subsequent reporting revealed that the doctor in the video is a complete quack — she has previously promoted claims about alien DNA and demon sperm.

"The woman that you said is a 'great doctor' in that video that you retweeted last night said that masks don't work and there's a cure for COVID-19, both of which experts say is not true," Collins told Trump during the evening briefing. "She's also made videos saying that doctors make medicine using DNA from aliens and that they're trying to make a vaccine to make you immune from becoming religious. So, what's the logic in retweeting that?"

Trump shook his head and looked down.

"I can tell you this," he said. "She was on air with many other doctors. They were big fans of hydroxychloroquine. And I thought she was very impressive in the sense that where she came — I don't know what country she comes from — but she's said that she's had tremendous success with hundreds of different patients. And I thought her voice was an important voice, but I know nothing about her."

Trump tried to move on to another reporter, but Collins had a follow-up. As she tried to cut in, he clearly grew annoyed. He decided to give up on getting a question from another reporter, said only, 'Thank you very much, everybody," and quickly left the room.