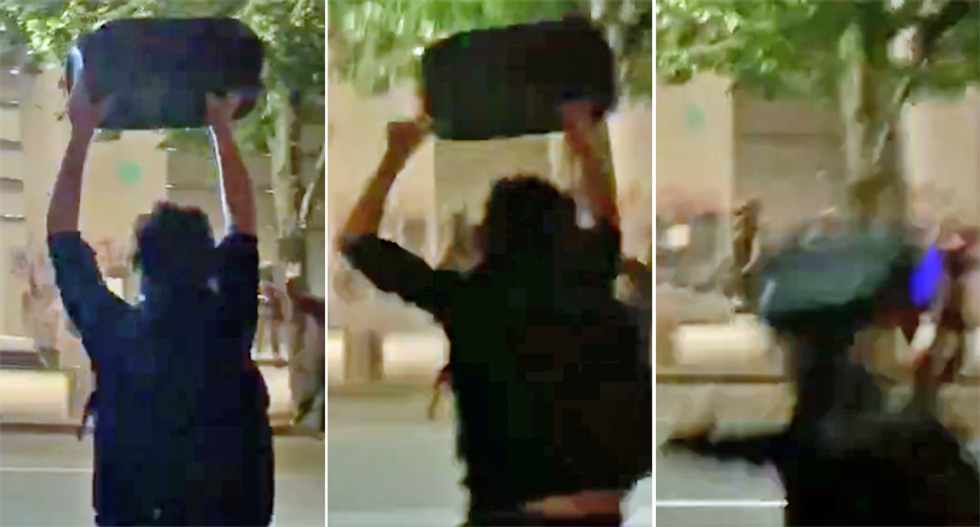 President Donald Trump and the Department of Homeland Security were called out by a U.S. senator after federal officials allegedly shot a peaceful protester in the head.

"Federal law enforcement shot and severely injured a protester Saturday night during demonstrations in front of the federal courthouse in downtown Portland, according to friends and family of the protester. Donavan LaBella, 26, was shot in the head by what friends and witnesses said was an impact munition," Oregon Public Broadcasting reports.

The video starts out peacefully, with a protester holding a boom box or speaker above his head, much like the famous John Cusack scene in the movie "Say Anything." But then it gets ugly.

"In a video of the incident sent to OPB, LaBella is seen pushing a canister of smoke or tear gas away from his feet across the street from the Mark O. Hatfield federal courthouse. Moments later, LaBella returns to holding a speaker over his head with both hands. Shots of impact munitions can be heard, and LaBella collapses to the ground, dropping the speaker," OPB reports. "Desiree LaBella, Donavan’s mother, said he suffered facial and skull fractures. He came out of surgery early Sunday morning and was responding to doctors."

"The consequences of Donald Trump unilaterally dispatching federal law enforcement into U.S. cities played out in Portland with a peaceful protester shot in the head," Wyden said.

"Trump and Homeland Security must now answer why federal officers are acting like an occupying army," he said.

"The events of last night at the federal courthouse were the tragic and avoidable result of President Donald Trump, for weeks, continuing to push for force and violence in response to protests," she said in a statement. "The cycle of violence must end. President Trump deploying armed federal officers to Portland only serves to escalate tensions and, as we saw yesterday, will inevitably lead to unnecessary violence and confrontation."

The officers have a shot someone in the head with what appears to be an impact munition, there is a lot of blood.… https://t.co/z9p4SCv2WF
— Garrison Davis (@Garrison Davis)1594529633.0