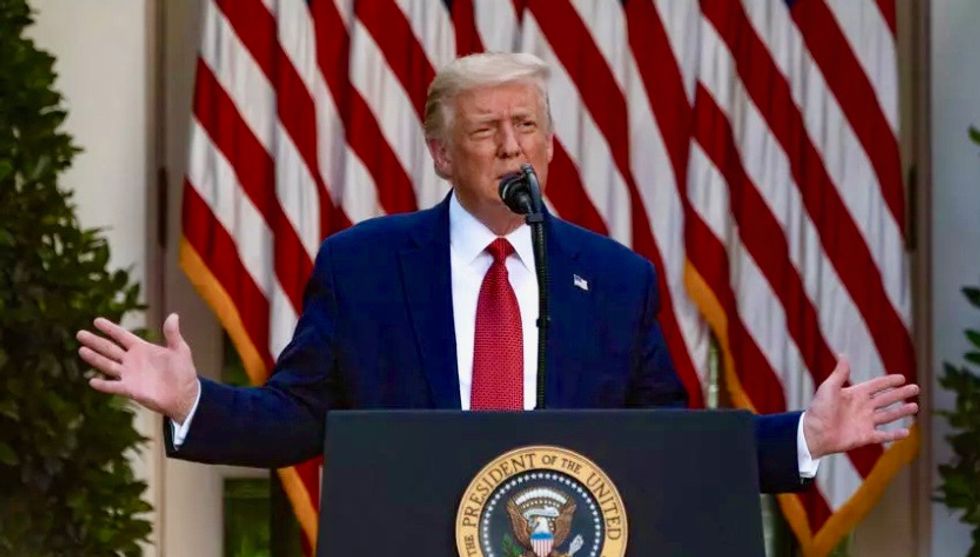 Donald Trump stood at the presidential podium in the White House Rose Garden on on July 14, 2020 and unleashed a torrent of criticism on his Democratic opponent, turning the press conference into a campaign event JIM WATSON AFP

On Tuesday at a somewhat hastily-called press conference that lasted for more than an hour President Donald Trump used the Rose Garden of the White House to slam and slander his political opponent, former Vice President Joe Biden, in a speech that had ethics experts shaking. Some called for the White House officials who worked on the speech or the event to be charged with violating the Hatch Act.

Many Americans watched and listened in horror as Trump desecrated the land that President John F. Kennedy used to honor Project Mercury astronauts, and where President Barack Obama held a State Dinner to honor Chancellor Angela Merkel of Germany.

Never before in America's history had a President campaigned, so blatantly, from the White House.

Reporters, too, were furious.

Trump soiled the WH Rose Garden with that performance. Presidents do not use the Rose Garden in that kind of naked… https://t.co/jgUUFFzw2J
— Jim Acosta (@Jim Acosta) 1594767389.0

I have covered 7 Presidents. I have never seen a POTUS use the Rose Garden or any White House platform to launch a… https://t.co/jawZ05OlMe
— Andrea Mitchell (@Andrea Mitchell) 1594782538.0

As it turns out, Trump's Rose Garden rally was not just the President going off-script. His remarks – lies, political attacks and all – were pre-planned, as was the event itself.

And there will be more.

The AP's Zeke Miller, according to CBS News, says "Trump is experimenting with holding 'quasi-rallies' at White House media events, after his campaign rallies sputtered during the pandemic."

Trump's White House chief of staff Mark Meadows, who does not work for the Trump campaign, added that the Rose Garden MAGSA rally “wasn’t quickly planned,” it “was on the books for several days.”