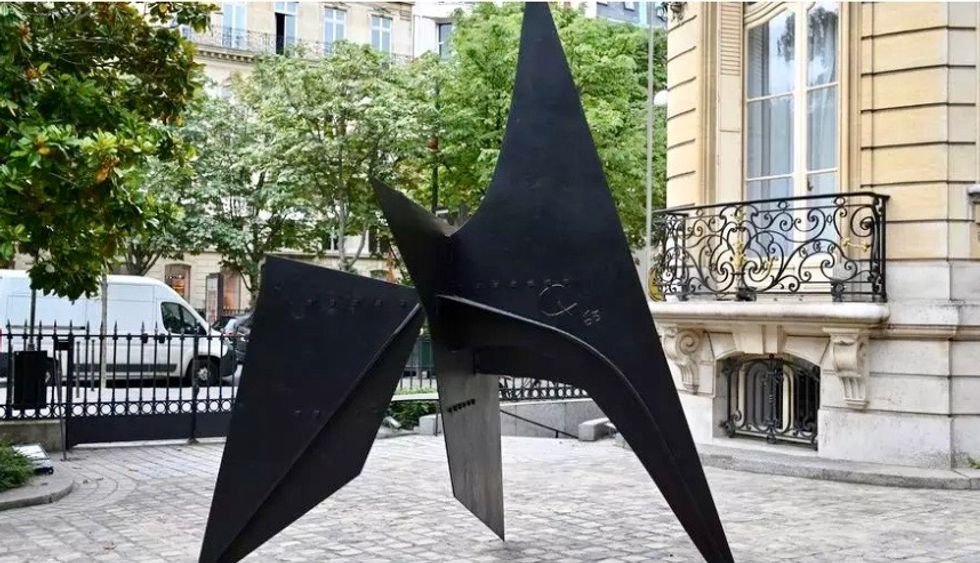 The black steel 3,5 metre (11 foot) structure was made by Calder in 1963 BERTRAND GUAY AFP/File

A huge sculpture by American artist Alexander Calder sold at auction in Paris on Wednesday for over 4.9 million euros, auctioneers Artcurial said, after nearly six decades on display at a holiday park in southern France.

The influential sculptor is known primarily for his colorful and abstract mobiles, of which he made thousands over the course of his career.

But he also made "stabiles" -- the opposite of mobiles -- one of which remained concealed from the general public in La Colle-sur-Loup village, a few dozen kilometres from the ritzy city Cannes.

"It's the first time that a monumental stabile of this scale by Calder came up for auction in France," said Hugues Sebilleau, the head of Artcurial's contemporary art department.

It was installed six years later in front of a holiday park which aims to attract low-income families by maintaining affordable prices.

The free-standing stabile was sold by the current owner of the holiday park Belambra Clubs. It was estimated to be worth between 2.5 and 3.5 million euros ($2.8-4.0 million).

"The stabile is completely characteristic of Calder's style at the time. The structure is very assertive and well planted on its four bearing points," said sales expert Serge Lemoine.

Trained as an engineer, Calder used a wide variety of media to make more than 22,000 works before he died in 1976.