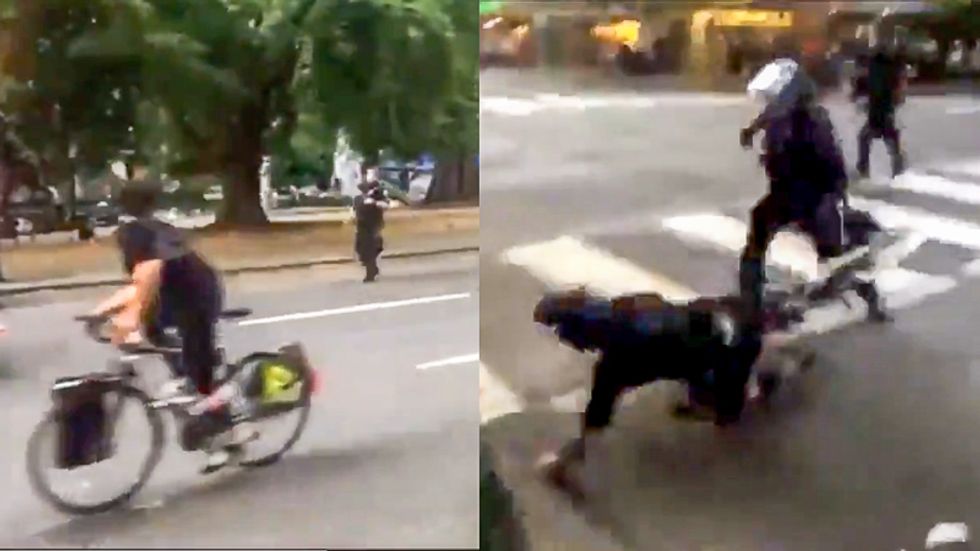 Police in Portland, Oregon were seen this week tackling a protester who was riding a bicycle.

Video of the incident was shared on Twitter on Thursday.

The video, which was posted by KATU's Dan McCarthy, shows three officers running toward the cyclist as he rides near Lownsdale Square. One officer uses his body as a projectile, knocking the man off the bicycle.

According to McCarthy, the protester was arrested. Details of the arrest were not immediately available.

The incident comes as police cleared protesters in Lownsdale Square Park and Chapman Square. At least five arrests were made during the action, McCarthy said.

WATCH - Portland Police officers knock a protester off of his bicycle and arrest him outside of Lownsdale Square Pa… https://t.co/sv3uam5X1z
— Dan McCarthy (@Dan McCarthy) 1594904562.0

Protesters in Lownsdale Square Park and Chapman Square in Portland were cleared out and told to stay out of the str… https://t.co/OT4D26GZ0u
— Dan McCarthy (@Dan McCarthy) 1594907693.0