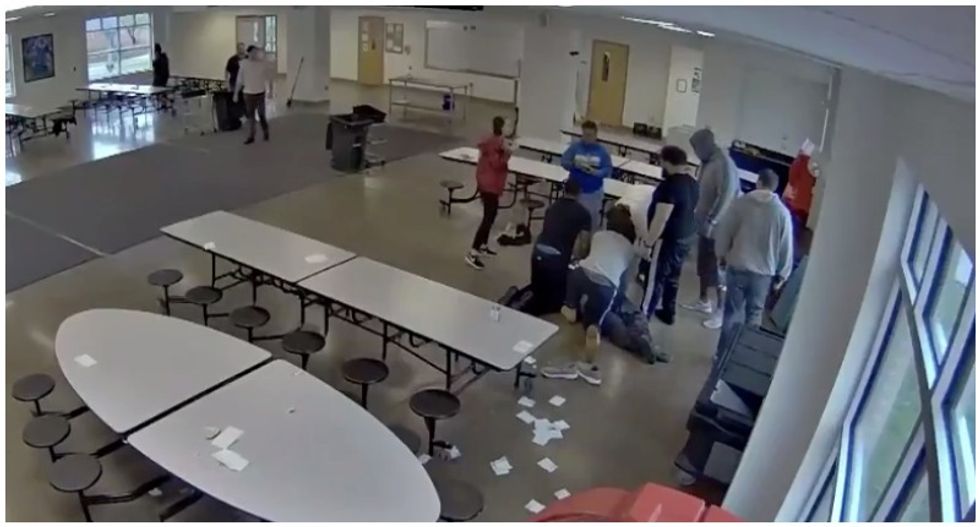 Last week, criminal charges and a civil lawsuit were filed against Lakeside Academy for Children and Sequel Youth Services of Michigan in connection with the apparent smothering death of 16-year-old Cornelius Fredericks, WKZO reports.

The attorney for the Fredericks family, Geoffrey Fieger, held a press conference where he revealed the surveillance video of the incident, showing that Fredericks was restrained several staff members at the facility.

The video shows Fredericks sitting at a lunchroom table before he tosses his sandwich to another table, prompting a staff member next to pushes him to the ground while two other staff members join in.

"Cornelius urinated on himself during the time in which they were killing him...He's not fighting at all because you'll see his shoes and his feet are just lying there," Fieger explained.

"One of the children was at the next table and has repeatedly advised us that Cornelius said 'I can't breathe. I can't breathe,'" he added.

The video also shows a nurse, identified as 48-year-old Heather McLogan, not doing anything to help Fredericks as he lies lifeless on the floor. As WJZo points out, McLogan eventually calls 9-11 several minutes later before staff members perform CPR on Fredericks.

Watch Fieger's press conference below. The video of Fredericks's death starts at around 8:00 of the video (Warning: graphic):