WATCH: Homeless man begs for mercy during ‘brutal attack’ by NYC cop -- and then gets charged with felony assault 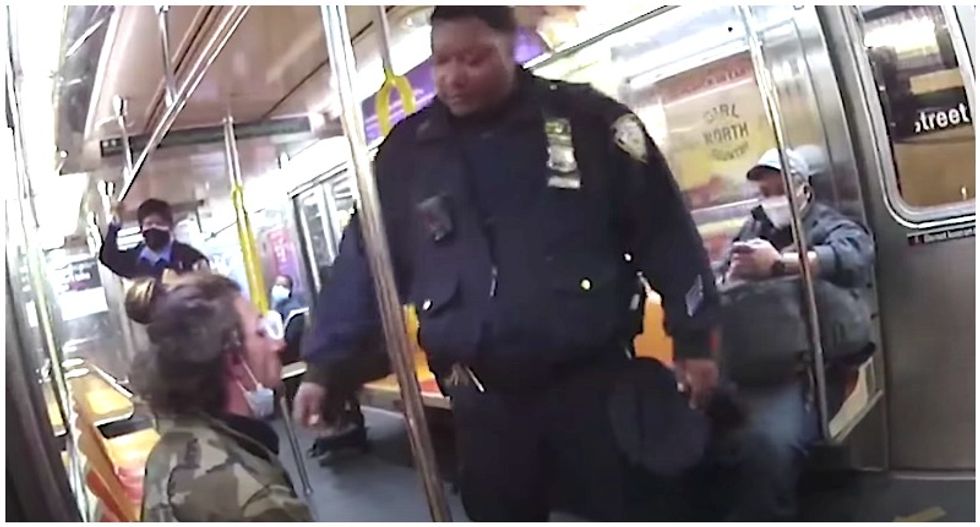 Body cam video shows a New York City police officer punching and dragging a homeless man off a subway train in May. But according to The City, Manhattan District Attorney Cyrus Vance is charging the homeless man with felony assault for allegedly slapping the officer’s hand away while the cop tried to cuff him.

"Joseph T., 30, who asked that his last name not be used because he fears retaliation, left a Manhattan homeless shelter with his belongings in a few tote bags. He got tired of waiting for a bed, huddled with others in the entrance area, he said," The City reports. "It was around 12:30 a.m. on May 25, according to a criminal complaint, when police approached Joseph because, Officer Shimul Saha said, he was 'occupying more than one seat' on the near-empty No. 6 train. Joseph left the car and moved to the next one."

Joseph protested that he couldn't be arrested for simply not wanting to get off the train.

That's when Officer Adonis Long reaches out to grab Joseph, prompting him to bat the officer's hand away. Long then punched Joseph twice in the face and dragged him off the train, knocking off his glasses in the process. Later in the video as Joseph cries and pleads for Long to stop, the officer sprays him with pepper spray.

“I’m having a panic attack, please,” he says, cuffed on the floor of the station. He then calls out for his older brother, who was not there.

According to prosecutors, Joseph's actions warrant the felony charges, which could send him to prison for 7 years.

In a criminal complaint, Officer Saha says Long told him that he “sustained swelling and substantial pain to the knuckles of his right hand and was transported to the hospital.”

“He informs me that because of the swelling he is unable to open and close his hand without experiencing pain,” Saha said.

The Legal Aid Society, which represents Joseph, is calling for the charges against him to be dropped and the officers involved to be fired.

“The brutal attack on Joseph by these officers is both unconscionable and completely indefensible,” said attorney Edda Ness.

“It’s equally shocking that the Manhattan District Attorney’s Office, despite seeing this video, chose to bump up the charges against our client. We are calling on them to dismiss these charges immediately in the interest of justice,” Ness added.