A son of a slave reflects on his American story 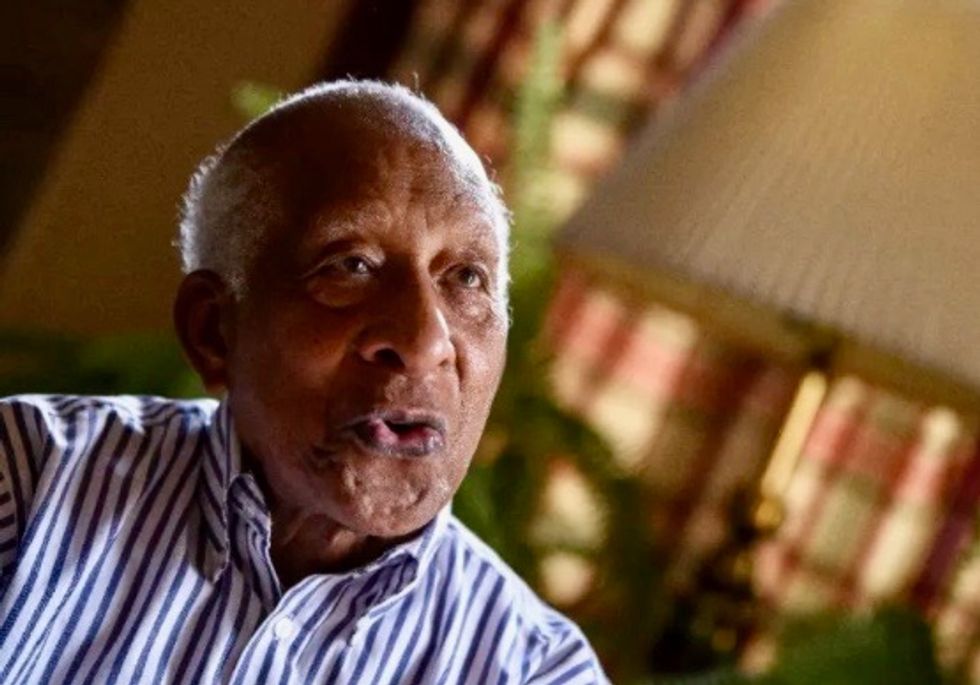 At 88, Dan Smith has witnessed some of the defining moments in America's fraught battle for racial equality.

He protested in Alabama, marched on Washington with Martin Luther King Jr, and attended the inauguration of the first black president, Barack Obama.

He also represents a living link to the nation's dark past: his father Abram was born a slave, 157 years ago.

As a boy, his elderly father told chilling stories: about the "hanging tree" where slaves were lynched, and the master who forced a slave to lick a wagon wheel. The man lost part of his tongue when it froze to the steel.

Though America has seen much progress, Smith feels that under President Donald Trump, some of it is being lost.

"I'm petrified," he tells AFP in an interview at his home in Washington.

"Everything we did in the civil rights movement... in terms of voting, and fairness and equality, he's trying to undo it."

Smith's father was born in Virginia in 1863, but eventually settled in Connecticut, where he had six children with his second wife Clara and worked as a janitor.

Disaster struck when Abram was struck by a car and killed six years later, leaving Clara to provide for the family. She struggled to make ends meet on her housekeeping wages.

Smith chipped in from a young age, working as an assistant to a veterinarian.

He recalls experiencing plenty of discrimination at school. But he was popular and handsome, and found surreptitious ways to date white girls  -- much to the horror of his mother, who feared the worst if their families found out.

After high school, he was drafted into the army. As a medic in Korea, he saw up close the horrors of war.

He became a hometown hero when he dove into a hurricane-swollen river to rescue a truck driver.

Thanks to the military, he put himself through college, joining the wrestling team and the glee club. He was even elected student body president.

During this period, he also endured one of the worst tragedies of his life while working at a summer camp.

One day, Smith took his young charges to see an old reservoir where he noticed a commotion: a girl had drifted too far and couldn't be found.

She was eventually pulled ashore, and Smith found a clear pulse.

But when he went to begin mouth-to-mouth resuscitation on the girl, who was white, he heard a policeman cry out: "She's already dead!"

Smith instantly realized the cop would rather see her die than be saved by a black man, and so he stopped.

Decades on, the episode still makes his stomach turn.

"It's very emotional," he says. "You talk about things people have to carry throughout their life. And that bugs me, that bugs me."

After graduating, Smith became a hospital social worker, sharing a dorm with Barry Fritz, a young Jewish man studying to be a psychologist.

The pair would debate the issues of the day, and Fritz persuaded Smith to attend a civil rights march in Washington, despite his misgivings.

After getting lost on the drive, they were pleasantly surprised when a policeman pulled them over -- and led them to a house where other marchers were staying.

The next morning, they found themselves standing on steps of the Lincoln Memorial, where they witnessed King's iconic "I have a dream" speech.

"It was emotional... there were black and white... everyone in America was there," said Smith.

Though the march awakened his sense of activism, he headed to Alabama as planned to pursue a graduate education and his dreams of becoming a veterinarian.

He tried to settle down to his studies -- but by the mid-1960s, the southern state had become the epicenter of the growing US civil rights movement, and people were pouring in to join the fight.

The college's president approached him and urged him to put his scholarly pursuits on hold, saying Smith's leadership skills from his undergraduate days could help the movement.

Smith started working on a literacy program for poor black people, and was later placed in charge of a civil rights project in Lowndes County, where 80 percent of residents were black and weren't registered to vote.

Smith almost became a martyr for the cause.

First, white supremacists burned his office building to the ground. Undeterred, Smith then worked from a trailer.

One evening as he drove home, he noticed he was being tailed by a car full of youths.

The vehicle eventually pulled up next to him and they screamed racial slurs, demanding he pull off the highway. The chase went on for 25 miles.

Smith finally saw a gas station on the outskirts of Montgomery -- full of black customers. He swerved in, and his assailants drove on.

In 1968, Smith moved to Washington, where he bought a house and raised two children with his first wife. He also began a career as a federal worker.

He founded a national training program for primary care physicians that runs to this day, which he considers his crowning achievement.

His boss took a chance on putting a black man in charge of such a major project in 1972 -- but unlike other officials at his level, he wasn't even assigned his own secretary.

Smith retired in the 1990s. He served as an usher at the Washington National Cathedral, where he met presidents Bill Clinton, George W. Bush and Obama.

He was also deeply involved in the creation of the Korean War Memorial in 1995.

In 2006, the cathedral hosted his own wedding to Loretta Neumann, an environmental activist and longtime federal worker who is white.

This summer, as Black Lives Matter protests rocked the country, the couple joined in.

For a moment, Smith is overcome with emotion, dabbing his eye with a tissue. Then he regains the old fire.

"You can write a little check, you can send a nickel, but everyone in this country should be concerned and should be involved," he says.