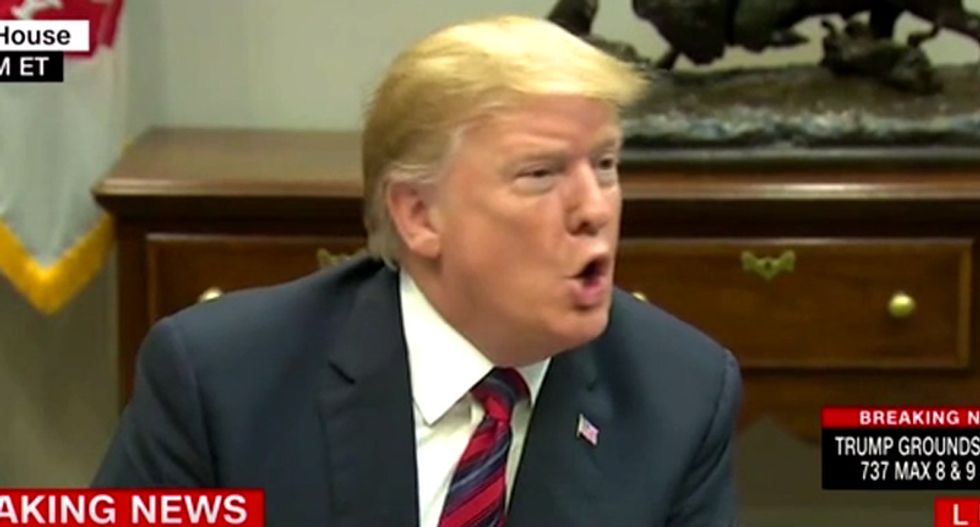 President Donald Trump on Monday attacked yet another way that states make it easier for their residents to vote.

Writing on Twitter, the president attacked secure drop boxes where voters can leave their ballots if they want to avoid voting in person while also avoiding sending in their ballots by mail.

"Some states use 'drop boxes' for the collection of Universal Mail-In Ballots," the president wrote. "So who is going to 'collect' the Ballots, and what might be done to them prior to tabulation? A Rigged Election? So bad for our Country. Only Absentee Ballots acceptable!"

As NPR reporter Miles Parks explained, ballots are collected from drop boxes by the same election officials who collect ballots from the boxes located at polling stations on election day.

"Dropboxes, which are usually monitored 24/7 by video surveillance and weigh 600ish pounds, are actually considered a way to give the voter MORE control over their ballot," he wrote in response to the president's tweet. "Election officials pick them up directly, eliminating the USPS (and potential delays) from the process."

Check out some more reactions to Trump's tweet below.

And then at in-person polling places there are also “boxes” into which ballots must be dropped. How are those “boxe… https://t.co/eXezpTTqTe
— southpaw (@southpaw) 1597680778.0

Trump has said FLORIDA is a model for mail-in voting. Florida uses drop boxes. They are available at the Super… https://t.co/UKkcxCQ1On
— Judd Legum (@Judd Legum) 1597680513.0

So weak and scared of democracy and the will of the people. This is someone who knows he’s losing. https://t.co/xgaafHMtzJ
— Markos Moulitsas (@Markos Moulitsas) 1597679892.0

A day after retweeting Biden/Poroshenko audio released by a Ukrainian lawmaker whom his own intel agencies say is a… https://t.co/f8SO32atND
— Andrew Desiderio (@Andrew Desiderio) 1597680157.0