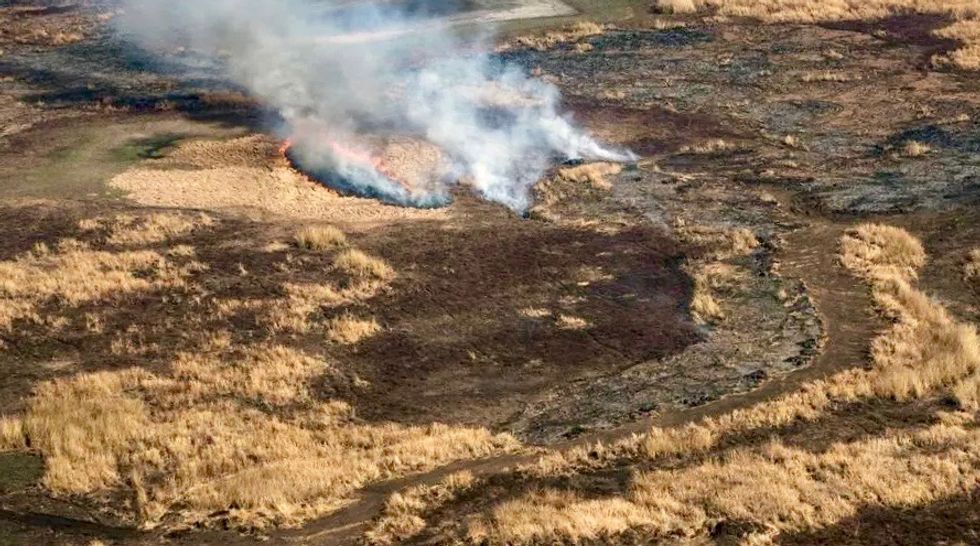 Parched wetland in the Parana Delta, an area of rich biodiversity that is under threat from thousands of fires AFP

Ravaged by drought, the Parana Delta in Argentina, one of the largest and most biodiverse in the world, has been burning like never before since the beginning of the year.

During the first seven months of 2020, more than 11,000 fires were detected in the 14,000 square kilometer (5,400 square mile) region, according to the Antonio Scasso Museum of Natural Sciences.

More than 530 square kilometers of marshland -- an area equivalent to three times Argentina's sprawling capital Buenos Aires, which lies to the southeast -- has been razed, according to estimates based on satellite images.

The flames are devastating the rich biodiversity of a territory that is home to 700 species of plants and animals, according to the National Rosario and Littoral universities.

"The fires generate an immediate impact and others that are felt over the medium and long term: the death of animals, the loss of the natural habitat of many species, impoverishment of the soil, water and air contamination, emissions that generate climate change," Graciela Klekailo, from Rosario University, told AFP.

The delta is a flood plain made up of several islands where the Parana River empties into the Rio de la Plata.

The question on everyone's mind, though, is who is responsible?

Environment Minister Juan Cabandie accuses livestock producers of using fire to clear dry pastureland and regenerate it for their livestock.

Cabandie has filed a criminal complaint against producers and land tenants.

But those producers deny the accusations and claim the fires undermine their activities, in turn blaming authorities for "lack of control and neglect."

The Parana River -- whose name means little sea in the local Guarani language -- is much lower than normal.

"Right now the level of the Parana River in the Rosario port hydrometer is 80 centimeters. Normally in this area at this time of year it's three or four meters," said Postma.

Javier Torres belongs to a family in the city of Entre Rios that has produced honey for decades.

This year, 270 bee hives in the Delta's island areas were devoured by fire.

"It took years to build and will take me years to rebuild. I'm heart- broken. I haven't received any help from anyone so far," Torres told AFP.

Depending on the direction of the wind, the largest coastal cities on the western bank of the Parana, such as Rosario, San Lorenzo and Villa Constitucion, are engulfed by a dense cloud of smoke that causes breathing problems and allergies.

It's made all the worse by the coronavirus pandemic.

In June, Rosario University researchers found that the city's air had five times the allowed level of pollution.

"This is very serious in the context of a pandemic, with breathing issues," the researchers wrote.

While livestock rearing is the main activity in the Delta area, it also attracts poachers, fishermen and real estate speculators.

A group of universities and environmental organizations is clamoring for Congress to urgently pass a bill aimed at protecting the marshland.

They say the new law would create greater regulations regarding the use of the land and protect the Delta.

However, it has already failed twice to win passage in the legislature.

"It's the most important marsh system in Argentina. Here we call it our little Amazon," said Laura Prol, from the Ecologist Workshop, who is demanding action by authorities.

Former President Donald Trump's impeachment trial is scheduled to begin in the United States Senate next month, and New York Times reporter Maggie Haberman believes that there are witnesses who could make things significantly more uncomfortable for Republicans.

Appearing on CNN Tuesday, Haberman reiterated that her own sources have said they personally saw Trump enjoying watching his supporters riot at the United States Capitol building on January 6th.

On Tuesday, The Washington Post reported that Dominion Voting Systems' lawsuit against Trump ally and attorney Rudy Giuliani alleges he profited off of his voting machine conspiracy theories — by using them as a platform to hawk various products to Trump supporters.

The Dominion lawsuit seeks $1.3 billion in damages for harming the company's reputation with false claims that their voting machines were rigged, which has reportedly led to harassment and threats against their employees.

In an interview with the Washington Post's Jonathan Capehart, the son of the founder of Stormfront and the godson of former KKK leader David Duke attempted to explain the undercurrent of white supremacy that led to the storming of the U.S. Capitol by Trump supporters on Jan. 6th.

With columnist Capehart asking if it was "too wide of a brush" to paint the pro-Trump extremists as white supremacists, Derek Black said the crowd reminded him of the neo-Nazi "Unite the Right" uprising in Charlottesville in 2017.

According to Black, the movement is not going away and more can be expected of followers of the extremist ideology despite arrests.

"After a few years, we're going to see them popping up again. And that's something we should expect. And those are people we can say they are part of the white-nationalist movement. They have the ideology, they have the world view of a social movement that goes back for decades and has a lot of imagery and common cause and a lot of the same ideas and figures over and over again," Black stated while clarifying that the storming of the Capitol as lawmakers were attempting to certify the 2020 presidential election was not necessarily a "white-nationalist rally in the same way that Charlottesville was, but it was fused with white nationalism, anti-Semitism, and this ideology of white supremacy."

With Capehart suggesting that Trump tapped into white supremacist's grievances to not only get elected but to build his loyal following, Black concurred.

"There was a back-and-forth between Trump and a lot of the far-right white-supremacist organizers who have benefited from him is that his organizing made it easier to rally people to the cause of white power because a lot of the things he said were exact mirrors of what people within white nationalism say, and that makes it safer," he explained. "I think it's probably more accurate to say that he identified the power of it, and he leaned into it. And not everybody who supported him is a white-nationalist sympathizer, even, obviously, but the way this works is that the ideas that they spread are very potent and do cater to a much, much larger group in America than people who are actually white nationalists. Their whole agenda is to create talking points, to create messages that will then appeal to people who have more latent, almost like common racist ideas, and tell them to make that more extreme, more a part of their identity, more explicit."

As for the insurrectionists being defended as "regular everyday people" concerned about the government as opposed to hardcore militia members, Black stated that, just because people don't belong to militias, that doesn't mean they aren't hardcore white supremacists at heart.

"I grew up really familiar with the white-nationalist movement, and its membership is broadly made up of people who are heads of their own small business, who run a car dealership, who are lawyers, who are doctors, who have advanced degrees, and that level of education and income making you a middle-class American does not insulate you from fully believing the ideology of white supremacy, that I think we kind of fall into that, saying that there are white nationalists and neo-Nazis, and then there are like normal Americans who are getting caught up in it," he told Capehart, before adding, "I would not be surprised as we get more into the backgrounds of people who are being outed and arrested now, if we realize that they're both a surgeon and a longtime contributor to white nationalism."