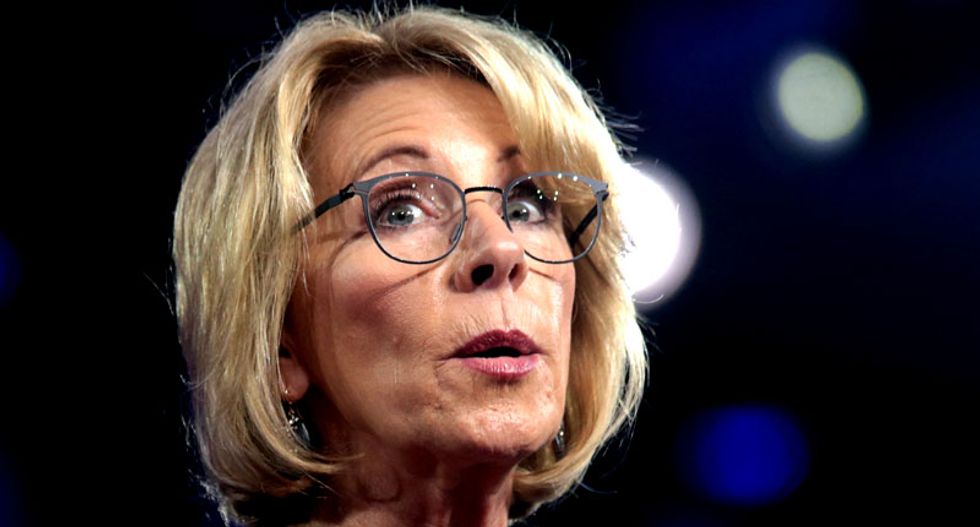 U.S. Secretary of Education Betsy DeVos speaking at the 2017 Conservative Political Action Conference (CPAC) in National Harbor, Maryland. (Gage Skidmore)
"Calling Covid-19 a 'good thing' for our schools just goes to show you how divorced this administration is from reality."

On the heels of two federal judges halting a controversial rule that allows private schools to get more Covid-19 relief funding than Congress intended, U.S. Secretary of Education Betsy DeVos said Friday that she believes the viral pandemic has been a "good thing" for the nation's education system, a comment that quickly drew criticism from Democrats and public education advocates.

"Betsy DeVos calling Covid-19 a 'good thing' for our schools just goes to show you how divorced this administration is from reality," the Michigan State Democratic Party—of Devos' home state—tweeted. "Let's not forget: Millions of kids are forced to stay home from school because Trump failed to handle the virus."

DeVos made the comment in a Friday interview aired on SiriusXM while discussing how the pandemic has affected the nation's schools. She claimed the pandemic—which caused teachers nationwide to switch to emergency remote learning plans—has shown that the U.S. education system is "static" and unable to adjust to changing circumstances.

"I think this [the pandemic] is a good thing because I think it's going to really force changes that should have happened many years ago, and most of that's going to happen when families themselves are empowered to make those choices and those changes and those decisions," DeVos said.

"I think the last six months have really revealed the fact that the system that most students have been a part of has been a very static, one-size-fits-all system that is unable in way too many cases to pivot, to be nimble and flexible and to adjust to new and different circumstances," she said in the interview.

Democratic presidential nominee Joe Biden also hit back against the comments on Saturday.

"I don't know a single person who believes any part of this pandemic has been a 'good thing'," Biden tweeted. "Secretary DeVos and President Trump refuse to take this virus seriously—our children are paying the price."

And the Democratic National Committee tweeted that the secretary was only "celebrating because she thinks this will advance her anti-public school agenda."

The education secretary's comments drew criticism from author and public school teacher Mercedes Schneider, who wrote on her personal blog:

First of all, a pandemic is not "a good thing" for schools. Teachers are preparing wills. Classrooms are being stripped bare for sanitation reasons, and the learning environment is stifled by requisite social distancing. Presenting this crisis as "good" is callous and ignorant.

Schneider took further issue with DeVos' characterization of the education system as "static."

"In the face of a pandemic, adjusting 'to new and different circumstances' is an understatement. Although stasis might have been desired, it was *not an option,*" wrote Schneider.

It is true that Covid-19 has shone a light on inefficiencies and inequalities in our education system—as some schools focus on remote learning, 1 in 5 parents have said it's likely their children will not be able to complete school work because they either do not have access to a computer or to a reliable internet connection, for example—but DeVos' insistence on private school funding continues to draw criticism and lawsuits.

A federal judge in San Francisco Thursday granted a preliminary injunction against the Department of Education's rule, calling the department's argument for it "interpretive jiggery pokery," and slamming the department for arguing that the rule is in the public's interest.

As part of the CARES Act, Congress appropriated more than $13 billion to help schools and their students cope with the hardships created by the pandemic. The law quite clearly called for the Department of Education to distribute the most money to the schools with the largest numbers of poor students.

DeVos didn't like that distribution formula and said in April that she would distribute CARES money to schools based on the total number of students, be they rich or poor, in the school. Since there are fewer low-income students in private schools, this would have diverted hundreds of millions of dollars away from public schools towards private schools.

U.S. District Judge James Donato agreed that there is some public interest in Covid relief funding going to private schools, but "allowing the Department to rewrite the statutory formula for sharing education funds is manifestly not in the public interest."

Donato's ruling was the second time in less than a week that a federal judge has ruled against DeVos on the issue.

Meanwhile, school districts across the country push forward with reopening plans, and early statistics indicate Covid-19 spread in districts that chose to return to in-person learning. The National Education Association last week introduced a dashboard that tracks the virus' spread in schools, and so far it reports 4,282 Covid-19 infections and 75 deaths.