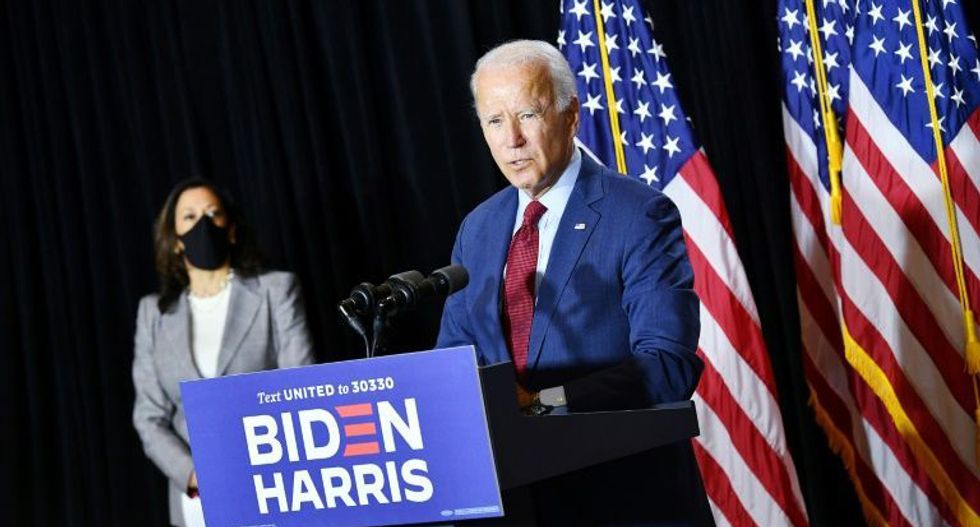 US Democrats kick off an unprecedented political experiment beginning Monday, an all-virtual national convention that nominates Joe Biden as their White House candidate to battle Donald Trump in the heat of a deadly pandemic.

With his vice presidential pick Kamala Harris, the first woman of color on a major US presidential ticket, Biden is campaigning to unify a nation ravaged by political and racial turmoil, voter suppression concerns and profound anxiety over the devastating coronavirus crisis.

But the running mates will deliver their message, aiming to inspire the Democratic base while luring frustrated Republicans, under unique circumstances: a four-day Democratic National Convention conducted entirely online.

No huzzahs, backroom dealings or balloon drops on ecstatic crowds and candidates, hallmark elements of US political conventions.

Instead, organizers are retooling to conduct business online, like drafting the party platform and coordinating scores of presentations and speeches from mid-day Monday.

Wednesday evening will spotlight Harris, a 55-year-old US senator and former prosecutor who is the daughter of Indian and Jamaican immigrants. Biden has promoted her story as the American Dream.

He then delivers his acceptance speech from his home state of Delaware.

The convention had been scheduled for Milwaukee, in the critical swing state of Wisconsin, and the cancellation is a brutal blow for the Midwestern city which had spent millions of dollars preparing to host the high-profile event.

Downtown streets were largely empty on Friday, with residents lamenting what could have been.

"I thought it was good for the city, everybody did," Dan, who provided only his first name because he works in law enforcement, said of the convention plans.

With the economy shedding millions of jobs during the pandemic, Biden will tout his $700 billion "Build Back Better" plan that would invest in new technologies and create some five million new jobs, an aggressive challenge to Trump on economic policy.

Organizers have promised an energized "convention across America," despite the potential online awkwardness.

"In just three days, we will kick off a Democratic National Convention that will look and feel very different than past conventions," acknowledged DNC program executive Stephanie Cutter.

Participants will highlight "Donald Trump's failed leadership and the promise of what we can and should be with Joe Biden as president."

The party has invited its luminaries, from former president Barack Obama and wife Michelle, who earned keynote speaking slots on Wednesday and Monday respectively, to Hillary and Bill Clinton and New York Governor Andrew Cuomo.

Several senators who challenged Biden for the nomination will also speak, including Bernie Sanders and Elizabeth Warren.

Keen to avoid the divisions that cuffed the party in 2016 when Hillary Clinton's supporters clashed with those backing Sanders, Team Biden has taken care to invite the progressive wing to help formulate the party platform.

Rising progressive stars will have their turn on the virtual stage, including popular 30-year-old congresswoman Alexandria Ocasio-Cortez.

Speaking Monday will be former Ohio governor John Kasich -- a Republican, representing those in his party who have abandoned the controversial president.

While Democrats scrapped their Milwaukee plan, one major political figure will be visiting Wisconsin Monday: Trump himself, eager to plant his flag again in the state he snatched four years ago when Clinton did not campaign there.

Democrats "are going to ignore Wisconsin just like they did in 2016," Trump told a virtual town hall Wednesday.

Ignoring the pandemic, Trump announced he will deliver a speech in Oshkosh, north of Milwaukee, addressing Biden's "failures on jobs and the economy," according to the president's campaign.

Trump will not attend the Republican convention in person the following week, and will deliver his speech from a yet-to-be-announced location.

Skipping the in-person element of the convention is "unfortunate," but understandable, said Christopher Arterton, professor emeritus of political management at George Washington University.

Critical functions may be diminished, including how the space normally serves as a lively arena for bargaining and strategizing between various interest groups and delegates, most of whom would be "cheering frantically" when the candidate is nominated, Arterton told AFP.

Biden and Harris hit the convention facing fresh attacks from Trump, including his opposition to mail-in voting and his refusal to approve emergency funding for the US Postal Service to ensure timely delivery of ballots.