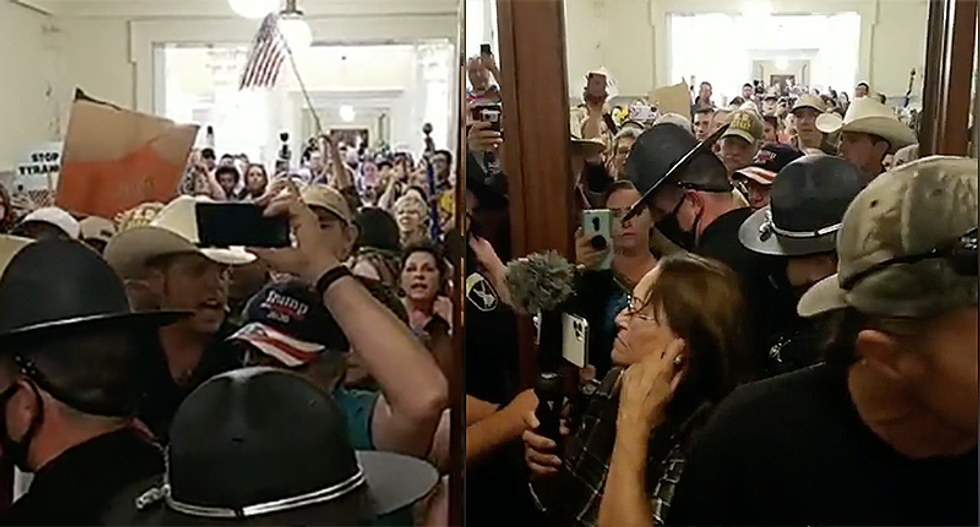 Anti-government militia member Ammon Bundy and his followers stormed the Idaho state House of Representatives on Tuesday protesting vaccines, social distancing and other far-right topics. Protesters not only refused to wear masks, but some of them were armed as they rushed police.

"The clash was a manifestation of the anger and frustration from a vocal minority of far-right Idahoans that has been compounding over the last several months as the state has navigated its reopening amid the pandemic," reported Idaho Public Radio.

The report explained that the far-right had taken issue with any restrictions aimed at stopping the virus in the state.

"Right now, Idaho has one of the highest rates of COVID-19 cases per capita, especially in Ada County, which includes the capital, Boise," according to the White House data public record cited.

"I think we're better than that. I think that Idahoans expect more out of their citizens," said Republican House Speaker Scott Bedke.

Rather than shut down the fourth floor, Speaker Bedke allowed the protesters to crowd into the room without doing any form of social distancing. It contrasts with the 2014 protests for LGBTQ rights where the protesters were arrested for "obstructing the hallways." In this violent protest, no one was arrested.

"I want to always try to avoid violence," Bedke told The Associated Press after the incident. "My initial reaction, of course, was to clear the fourth floor. But we had room for at least some more."

Gov. Brad Little (R-ID) asked the legislature to come back for a special session to handle the "civil liability issues" and election concerns. The state's county clerks are hoping that they can work on counting the massive influx of absentee ballots earlier than the law states now so that they can have the results in on time. They also need help finding poll workers. If they don't get enough poll workers, they'll have to kill polling locations, placing a greater burden on Idaho voters.

You can see a video of the militia violence below:

North Texas realtor Jenna Ryan, who took a private plane to Washington D.C. to participate in the riot that breached the U.S. Capitol on Jan 6, started up a donation drive on PayPal to pay for her legal fees after being charged with "knowingly entering or remaining in any restricted building or grounds without lawful authority" and "disorderly conduct on Capitol grounds."

But her fundraising efforts have hit a snag after PayPal booted her from its service, the New York Post reports. The online payment company reportedly banned her from its platform after she had raised $1,000.