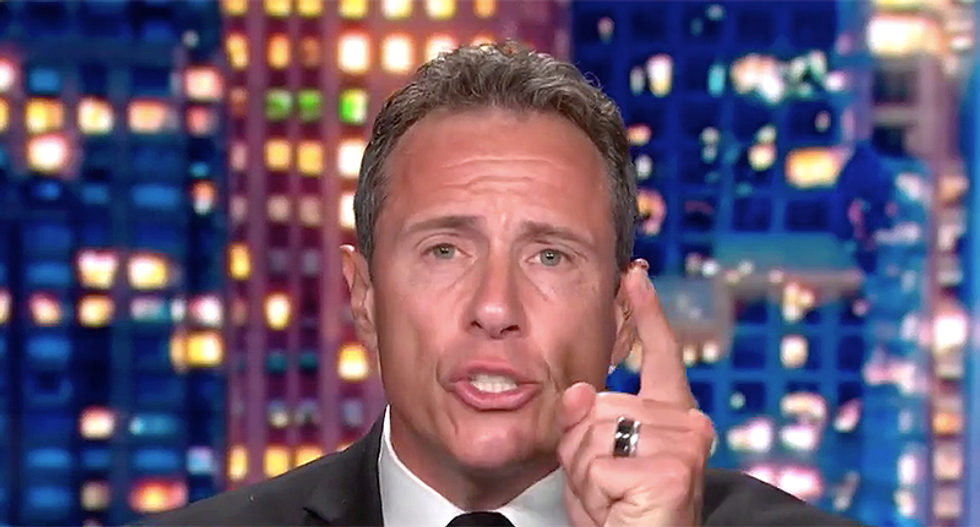 On CNN Monday evening, Chris Cuomo slammed President Donald Trump for defending right-wing violence even as he tried to cast himself as a candidate of "law and order."

"It seems this is just about scaring his base enough to win the election. And I have to tell you, whatever the polls say, it may work," said Cuomo. "The big question is, at what price? He is now literally painting a man who supports him as a victim, at the same time the police are calling him a murderer."

"Is this law and order?" said Cuomo. "Backing a 17-year-old who came to town in out of state, with a gun that was illegal for him to carry openly, who shot and killed people, only to have police have him walk by as the crowd shouted what he had done? What about the two people who were killed at the scene? You don't have to guess about them, they're dead. They were white too, maybe not Trump supporters like the shooter, but think about it, how can our president believe that painting this shooter as a victim is good for our country? How does that not encourage more of what the local police called vigilantism."

"The violence in the streets ... [it's] un-American," said Cuomo. "All politicians should be loud and clear about that, it shouldn't be a point of division. This president has chosen to make racial equality an opposing force to his own political cause. He also defended supporters who shot paint balls at protesters in Portland saying, paint is a defensive mechanism. Blaming Biden, who is not in office, for what is happening while Trump is in office."

"In 60 some days, you're going to have to decide what will make it better, that has to be our collective cause," said Cuomo.

According to reports, Sen. Patrick Leahy, (D-VT) -- not Supreme Court Justice John Roberts -- will preside over former President Trump's upcoming impeachment trial. Leahy is the president pro tempore of the Senate, making him third in the line of presidential succession, after the vice president and House speaker.

Responding to the news, Sen. John Cornyn fired off a tweet protesting the development, calling it "unprecedented."