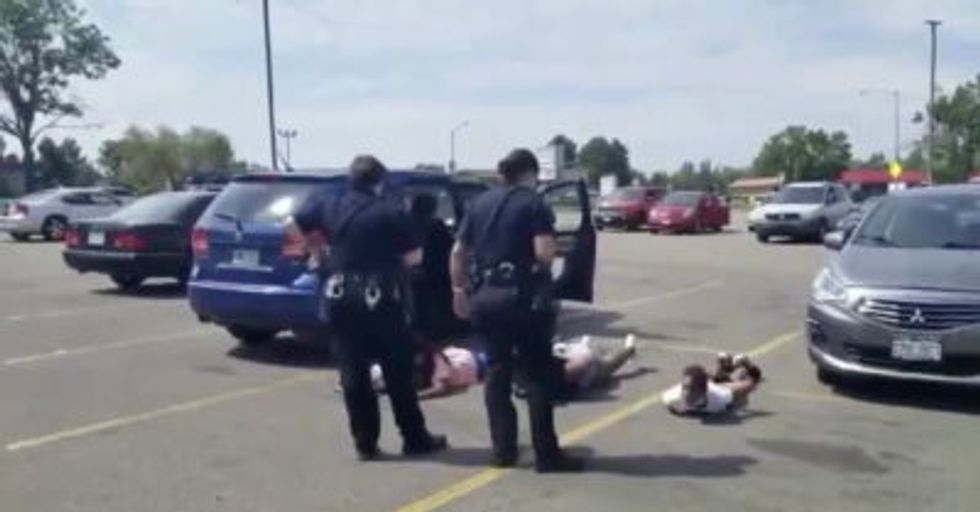 Aurora, Colorado police are being criticized nationwide after officers stopped an SUV and forced the occupants, including four Black children, out of the vehicle, handcuffed at least two of them with their hands behind their backs, and forced them to lie face down on the hot parking lot pavement.

In the video below the children and the adult driving the car can be heard crying and screaming. The youngest girl, just six years old, is wearing a tiara. Some of the officers are not wearing masks.

ABC affiliate The Denver Channel reports the cops made an error, wrongly "matching" the license plate number of the SUV to an out-of-state license plate of a motorcycle.

In total, "over a dozen" police officers arrived on the scene, some with guns drawn, over what they wrongly claimed was a stolen vehicle.

“I do not think a stolen vehicle is worth traumatizing the lives of children," a witness on the scene says. "On top of that, I was 20-feet away with a drawn gun. They didn’t even tell me to move, secure the scene. They didn’t do anything."

The vehicle, reported stolen in February, the Daily Mail adds, was found the following day.

The officers, according to Aurora Police Chief Vanessa Wilson, were following their training.

"We have been training our officers that when they contact a suspected stolen car, they should do what is called a high-risk stop. This involves drawing their weapons and ordering all occupants to exit the car and lie prone on the ground."

In a statement Wilson says, "I have called the family to apologize and to offer any help we can provide, especially for the children who may have been traumatized by yesterday's events. I have reached out to our victim advocates so we can offer age-appropriate therapy that the city will cover."

The Aurora Police Dept. is still under fire for for the killing of a 23-year-old black man, Elijah McClain, one year ago this month, in a lethal chokehold.