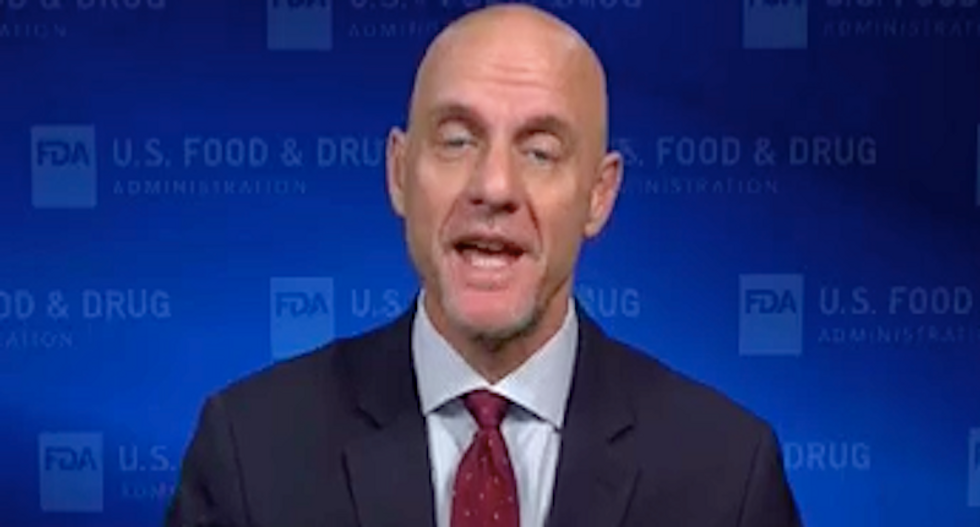 "The takeover of the FDA by politics and Trump political hacks is something that threatens your life and the lives of everyone you care about."

Two public relations officials were dismissed from their positions at the Food and Drug Administration Friday following Commissioner Stephen Hahn's decision to walk back his recent claims about convalescent plasma as a treatment for Covid-19.

The agency's chief spokesperson, Emily Miller, only served in her position for 11 days before being ousted. Miller, who previously worked on Sen. Ted Cruz's (R-Texas) reelection campaign and for the right-wing news outlet One America News, was "involved in prepping the commissioner and the press materials for the announcement on the emergency use authorization on convalescent plasma," according to CNN.

"I did recommend that he correct the record. If a federal official doesn't say something right, and chooses to clarify and say that the criticism is justified, that's refreshing."

Earlier this week, Hahn joined President Donald Trump in a press conference in which the president announced that the FDA had given emergency authorization for the use of plasma from patients who have recovered from Covid-19 to treat people who have the illness.

Hahn was rebuked by public health experts for giving approval to the treatment, which has not yet been subjected to randomized, controlled trials—the standard process for testing the efficacy of a drug, treatment, or vaccine.

The commissioner took part in the press conference and gave the authorization after Trump, in numerous statements, accused "the deep state, or whoever, over at the FDA" of standing in the way of approving the treatment in order to hurt the president's reelection chances. Both Dr. Francis Collins and Dr. Anthony Fauci of the National Institutes of Health had cautioned against approving the use of plasma.

At the press conference, Trump claimed convalescent plasma has been "proven to reduce mortality by 35%." According to British palliative care physician Dr. Rachel Clarke, the limited research of the treatment actually shows a reduction of "at most, 3.5%—in a poorly designed study with no control arm."

A day after the press conference, Hahn tweeted that the criticism he received was "absolutely justified" and that "the data show a relative risk reduction not an absolute risk reduction."

Along with Miller, PR consultant Wayne Pines, who had advised Hahn to walk back his claims, was fired from his position at the FDA Friday, the New York Times reported.

"I did recommend that he correct the record," Pines told the Times. "If a federal official doesn't say something right, and chooses to clarify and say that the criticism is justified, that's refreshing."

The FDA denied that Pines was dismissed because of the public statements Hahn made about convalescent plasma, but critics said both firings were evidence that PR officials have been scapegoated to cover up the agency's failings.

"The most [telling] part of this is not about Emily Miller, but firing the consultant who advised Stephen Hahn to tell the truth," tweeted Eric Topol, a scientist and director of the Scripps Research Translational Institute, who denounced Hahn earlier this week for overstating the effects of plasma.

Rep. Bill Pascrell (D-N.J.) tweeted that the dismissal of the PR officials offers more evidence of the politicization of the FDA during a public health crisis.

"The takeover of the FDA by politics and Trump political hacks is something that threatens your life and the lives of everyone you care about," the congressman wrote.