Fox pundit 'ignoring 400 years' walks into smackdown from Donna Brazile: 'You do not recognize my existence' 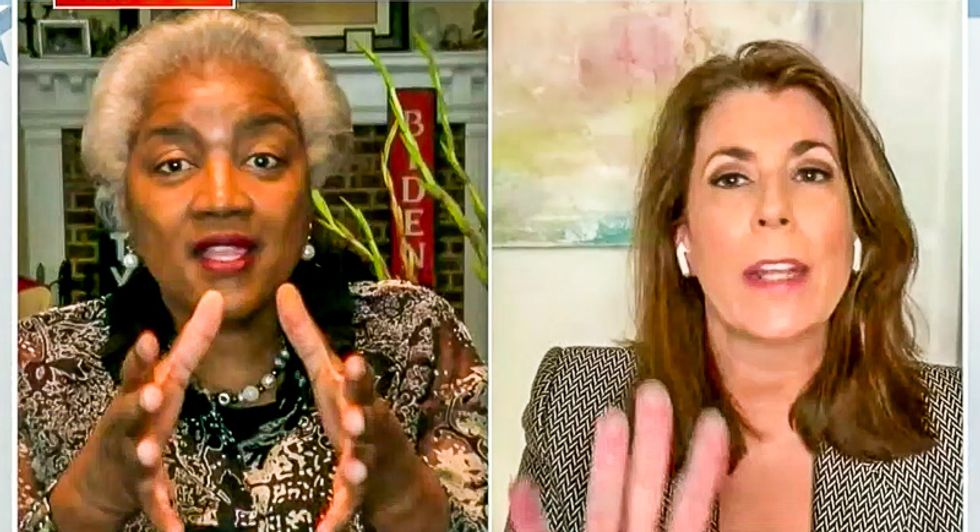 Democratic strategist Donna Brazile lashed out at Republican pundit Tammy Bruce on Tuesday and accused her of ignoring "400 years" of racism in America.

During a segment about the Republican National Convention on Fox News, Bruce praised President Donald Trump.

"It is about a man who cares about the American people more than he cares about his next job," Bruce insisted, "and winning in the sense of, 'Oh, it's just got to be about the next election.' He has given up everything as has his family to change this nation and get her back on her feet so we as Americans can live lives that best suit us."

Before finishing, Bruce slammed the ongoing protests for racial justice.

"No Democrat has spoken out," she complained. "Americans have a choice and the fact is is that the Republicans are showing an expanse of what the American sensibility is and what the American future is. It's not some discussion over some seminar of complaints."

Brazile accused Bruce of sounding like a broken record.

"It sounds like I will never be an American in your world," Brazile charged. "Because after 400 years, my family cannot walk out of this house without fearing violence."

"No one is saying that!" Bruce objected.

Bruce continued to talk over Brazile and was interrupted by Fox News host Brian Kilmeade.

"Tammy, hold on one second," he advised. "Donna, your point is you're ignoring 400 years."

"Don't be so condescending and patronizing!" Brazile exclaimed. "To tell me that I cannot tell my story. Tammy, the story of people who are struggling to live and breathe are just as important as the story of one man."

"It's offensive when you say that," Brazile said.

"And you haven't recognized mine or anyone else's," Bruce quipped. "We're all at the same table as Americans."

Watch the vide below from Fox News.