'George W. Bush and Dick Cheney would rather be waterboarded than appear at Trump’s convention': Ana Navarro 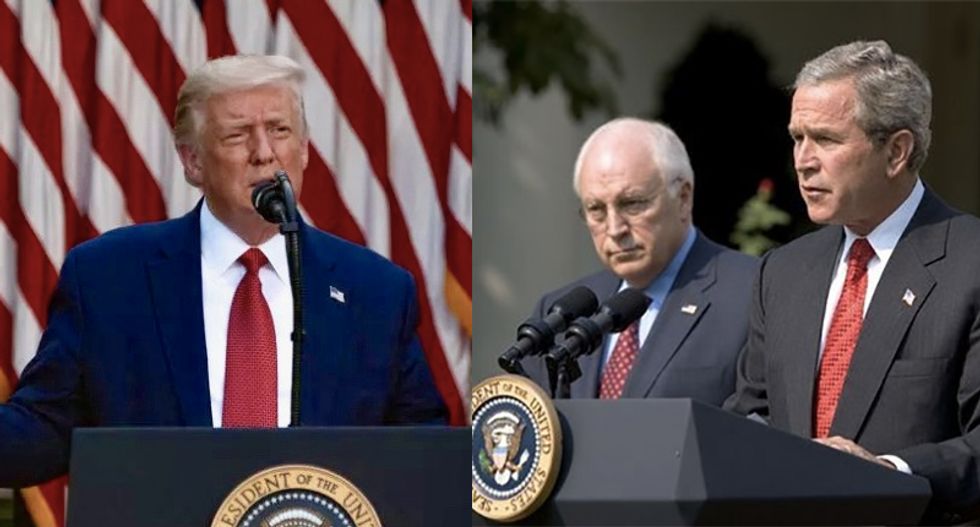 Donald Trump stood at the presidential podium in the White House Rose Garden on on July 14, 2020 and unleashed a torrent of criticism on his Democratic opponent, turning the press conference into a campaign event JIM WATSON AFP and Dick Cheney and George W. Bush (Photo: Bush White House, 2004)

CNN's Ana Navarro and Scott Jennings faced off during a CNN conversation about the recently released recordings from Maryanne Trump Barry. It became clear that conservative supporters of President Donald Trump, Scott Jennings, didn't have a defense for the details from Trump's sister. So, he attacked Mary Trump for recording the conversations she used as research for her tell-all book.

"I think the president will be elected, or not, by his behavior and how it contrasts with [Joe] Biden," Jennings said. "I gotta be honest, what kind of a (sic) empty, hateful, person surreptitiously records one relative because she's unhappy about an inheritance. And then later releases the audiotape to hurt another relative, which, apparently she hates President Trump. Ha, haha. I mean, to get inside the mind of someone who would do that, I -- I frankly, I find this whole thing -- I don't want to get into the matter of a family matter, but I think it's reprehensible."

Presumably, Mary Trump never intended for the audio records to be part of her book release, she seemed to have done the 15 hours of recordings for research for the book.

CNN host Ana Cabrera didn't care for Jennings' judgment of the Trump family and asked him again what he thought about what they said.

Republican consultant Ana Navarro noted that Trump Barry had known the president for all of his 74 years of his life.

"I think it could be something that influences and affects the way that Independents and disenfranchised Republicans like myself, who may be having a hard time," she said. "It's one thing to write in somebody, it's one thing not to vote, and it's another thing when you are a lifelong Republican to get yourself to vote for the other candidate. In this case, for Joe Biden. I think all of that chips away at the resistance for not voting against Joe Biden. I think it paints a picture. She is supposedly a sister that he gets along with. He has spoken about in the past. She has known him from the moment he was born."

Navarro said that the differences Trump Barry brings up aren't about policy but character flaws that voters deserve to understand as they depend on him to save their families from a pandemic.

"She called him phony. She called him cruel," Navarro continued. "That's so poignant, to call your brother cruel, calling him somebody who doesn't read, talking about his base the way she does. Those things are very, very powerful that she says. You can't pretend that it's not his sister. You can't pretend it's not her voice. You can deflect. You can talk about his brother, who unfortunately passed away. You can talk about how dysfunctional the family is. You can answer the question any other way. But at the end of the day, it is his sister, who has known him for all 74 years of life that he's had on this Earth, saying that he is a cruel, ignorant man who doesn't read and is a phony."

Both Republicans agreed that former GOP presidents like George W. Bush and former Vice President Dick Cheney wouldn't appear at the convention in the coming week. Jennings said that they don't matter anyway.

"Look, I suspect that George W. Bush, Dick Cheney, Mitt Romney, you know, they would rather be waterboarded than be at the convention," said Navarro. "Ironically enough, the only nominees that have spoken at a convention was John McCain. We heard him in his own words, basically talking in favor of Joe Biden. So, you're going to be hearing more Republican nominees than in the Republican conversation. That's what the Democratic convention was about, making it a very big tent, where everybody from Democratic progressives to Republicans to moderates to Independents could be included. They realize that the more the better. They also have great, energizing speakers in their former presidents. People like Barack Obama and Michelle Obama, who are very energizing for their base."