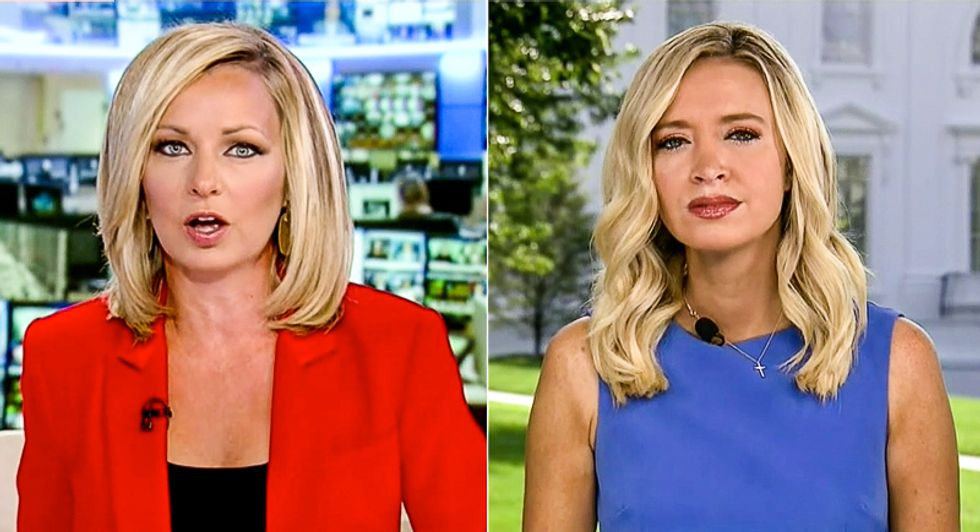 Fox News host Sandra Smith asked McEnany about Trump's claim that QAnon are "people who love our country" that "like me very much."

Smith explained that a recent Wall Street Journal investigation found QAnon to be "a right-wing group that thinks President Trump is under assault by Satan worshipers."

"Is the president supporting this conspiracy theory?" Smith asked the press secretary.

"No, what the president is doing is working for the American people," McEnany insisted. "The media talks a lot about this so-called QAnon. I've never heard the president mention it. I talk to him, oftentimes ten times a day. Not once have I heard him mention this group. The media talks about it. But this president if focused on a pandemic that he's navigating a historic response for."

The Fox News anchor reminded McEnany that Trump spoke to the media about QAnon just one day earlier.

"His words were that he has heard about them," Smith said. "And that they are people that love our country. It was puzzling to many people."

"He's talking about his supporters," McEnany replied. "He believes his supporters are good hardworking people that love this country. He's not in the business of a 'basket of deplorable' politics."

"Does he want the support of that group?" Smith interrupted.

McEnany stuttered before answering: "He has not at all looked into who QAnon is!"

"The president did comment on it," she explained, "saying that these are people that love our country. So, if there's any further response from the White House, let us know."