How the press rewards Trump for his endless, obvious lies 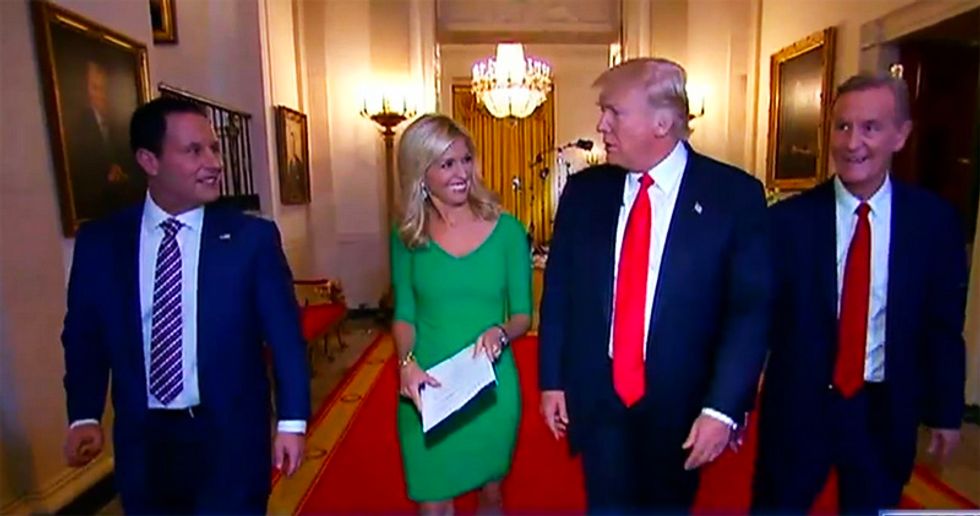 On Friday, 19 days after Donald Trump told Fox News that he'd be signing "a full and complete healthcare plan" in two weeks' time, he announced that, "over the next two weeks," he would "be pursuing a major executive order requiring health insurance companies to cover all pre-existing conditions for all customers." That isn't within his authority to do without an act of Congress. But as you probably know, the Affordable Care Act, which Trump's currently urging the Supreme Court to throw out in its entirety, already bars insurers from discriminating against people with pre-existing conditions.

In all likelihood, Trump's new "order" will never materialize. But if he does issue one, the insurance industry won't challenge it in court because it's already against the law to discriminate against people with pre-existing conditions. They wouldn't even have standing to challenge it because they wouldn't be able to show that they would be impacted by it.

You probably know all of this, but most Americans don't follow policy debates very closely. And this is how CBS News' White House Correspondent reported the news to his 353,000 Twitter followers:

Pres says he thinks he can sign the Executive Order relief measures "by the end of the week." He says WH lawyers ar… https://t.co/jmtrut3PAu
— Mark Knoller (@Mark Knoller)1596845364.0

Through July 9, Trump had told 20,055 lies in 1,267 days in office, according to The Washington Post's database (WaPo calls them "false or misleading claims"). Many of these claims, no matter how outlandish, have been dutifully amplified by reporters before amounting to nothing. (Just this week, The Daily Beast described Trump's chimeric, unenforceable "phase one" trade agreement with China as something "Trump has considered a crowning, legacy-defining process of his first term in office." And this was in a story about how it's currently unraveling.)

Trump just needs the headlines for his campaign, and even after four years of consistently obvious mendacity, he gets them over and over again.

The big story this week is Trump's continuing efforts to steal the election, and screw over a unionized workforce that is disproportionately made up of people of color, by sabotaging the Postal Service.

Postmaster General Louis DeJoy unveiled a sweeping overhaul of the nation’s mail service, displacing the two top executives overseeing day-to-day operations, according to a reorganization memo released Friday. The shake-up came as congressional Democrats called for an investigation of DeJoy and the cost-cutting measures that have slowed mail delivery and ensnared ballots in recent primary elections.

In somewhat related news, The Washington Post reports that "after less than three months on the job, the internal watchdog of the State Department has resigned, U.S. officials said, marking another significant shake-up for an office sworn to investigate malfeasance and wrongdoing."

Akard became inspector general after President Trump abruptly fired Steve Linick in May at the recommendation of Secretary of State Mike Pompeo. That decision immediately prompted criticism from lawmakers because Linick had been investigating allegations that Pompeo and his wife, Susan, had improperly used State Department resources. Linick was also examining several other issues, including Pompeo’s decision to expedite arms sales to Saudi Arabia over the objections of Congress.

Akard is the fifth inspector general to be pushed out by Trump in the past few months.

Who knew that fascists were so corrupt?

Several former lobbying clients of Chad Wolf, now the acting secretary of Homeland Security, have received millions of dollars’ worth of government contracts while he has held senior positions within the department.

Wolf, who became the acting chief of the department late last year, was a lobbyist for over a decade at Wexler & Walker before he took leadership roles with DHS under President Donald Trump....

Since then, several of Wolf’s former clients reaped a total of at least $160 million in contracts from DHS, according to a CNBC analysis of the public filings. [CNBC]

According to Judd Legum, Trump is running a scam contest for his supporters. It isn't the first time.

Only the best people...

In the five books authored by President Donald Trump’s nominee to lead the Interior Department’s Bureau of Land Management, William Perry Pendley rails against “environmental extremists,” endangered species protections, People for the Ethical Treatment of Animals, and Al Gore — all of whom, in his view, would illicitly limit private development on the lands of the West. He had another target too: policies supporting Native nations’ treaty rights.

Pendley has been the acting leader of the BLM, which is responsible for managing the nation’s public lands, for more than a year. With confirmation hearings expected in the coming weeks, his long history of attacking Indigenous people is getting new scrutiny.

States are relying heavily on National Guard troops to assist with various aspects of Covid-19 containment. The federal government traditionally covers the cost of such emergency deployments, but Trump is moving to impose cost-sharing on them--with the exception of Texas and Florida, key competitive states with Republican governors. More details at Politico.

Our last ambassador to Germany, Richard Grenell, was a notoriously vicious Twitter trill whose assignment was mired in scandal. He now heads the US Intelligence community, and his replacement is a real winner, according to CNN.

President Donald Trump's nominee to become the US ambassador to Germany has a history of making xenophobic and racist comments about immigrants and refugees in both Germany and the US.

Retired Army Col. Douglas Macgregor, a decorated combat veteran, author and frequent guest on Fox News, claimed that Muslim migrants were coming to Europe "with the goal of eventually turning Europe into an Islamic state." He criticized Germany for giving "millions of unwanted Muslim invaders" welfare benefits rather than providing more funding for its armed services...
Macgregor also described the German cultural concept of Vergangenheitsbewältigung, which seeks to "cope with the past" and confront the atrocities the country committed in World War II, as a "sick mentality" and he downplayed the country's Nazi history.

*****
NYT: "Scientists Worry About Political Influence Over Coronavirus Vaccine Project."
We do too.
*****
According to the Texas Tribune, the regime, citing Covid-19, issued an emergency order that granted "federal agents sweeping powers to almost immediately return anyone at the border, including infants as young as 8 months."

Children are typically entitled to special protections under the law, including the right to have their asylum claims adjudicated by a judge.

Under this new policy, the administration is not deporting children — a proceeding based on years of established law that requires a formal hearing in immigration court.

It is instead expelling them — without a judge’s ruling and after only a cursory government screening and no access to social workers or lawyers, sometimes not even their family, while in U.S. custody. The children are not even granted the primary registration number by which the Department of Homeland Security tracks all immigrants in its care, making it “virtually impossible” to find them, Efrén C. Olivares, a lawyer with the Texas Civil Rights Project, wrote in a court declaration arguing that the practice is illegal.