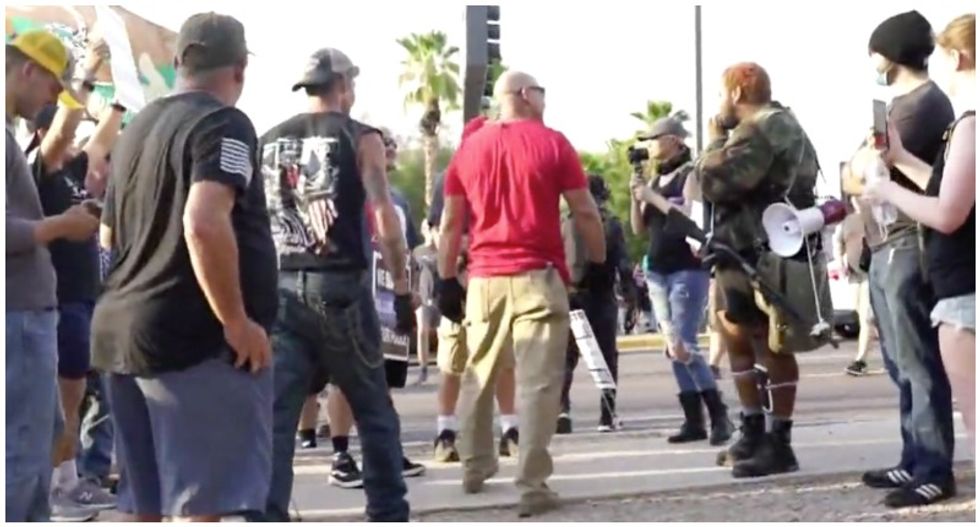 Tension between pro-police rally goers and Black Lives Matter protesters in Gilbert, Arizona, has evolved into fistfights, The Arizona Republic reports. Now, another rally is planned for this Thursday.

"Videos posted to social media and shared with The Arizona Republic show pro-police protesters waved flags and yelled about the threat of 'antifa,' referencing a loosely organized antifascist ideology that has no clear organization or membership but is often criticized by President Donald Trump," AZCentral reports. "Several people were also caught on video threatening and punching counterprotesters gathered across the street with little police intervention. Some were heard making homophobic and racist remarks and Nazi salutes during and following the brawl."

According to counter-protesters, police were favoring the pro-cop demonstrators, who they say largely instigated the violence.

BLM organizer Brandon Burkhalter said that the pro-cop faction "came over and came up onto the sidewalk and started yelling and calling names," such as the N-word and anti-gay slurs. He also said he heard someone say, "Heil Hitler."

One video of a rally confrontation shows a man giving the Nazi salute. Another video shows someone saying, "White power."

"We take pride in our police department and the fact that we are the second safest city in the country and we want to keep it that way," Gilbert Mayor Scott Anderson said. "Although peaceful protests are supported, violence will not be tolerated."