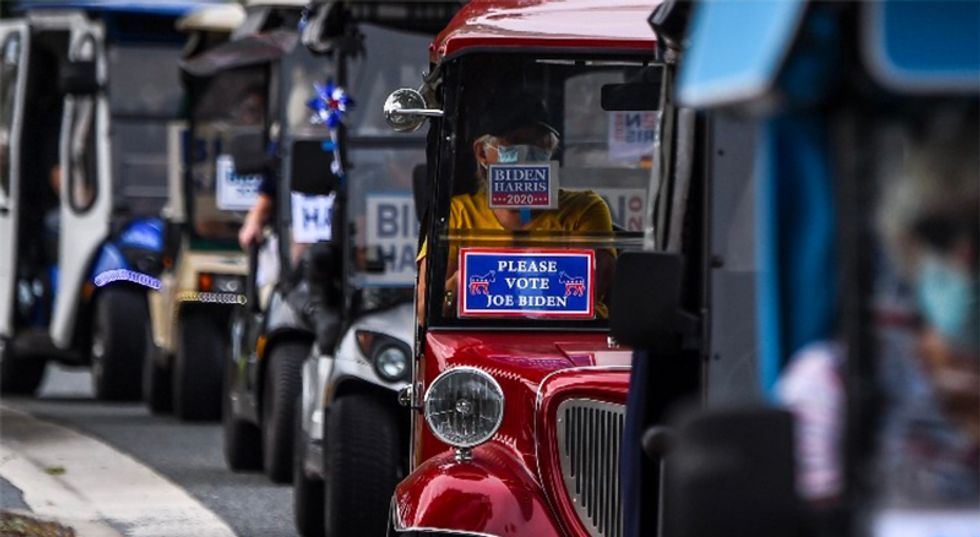 Hurled insults, physical attacks and pleas for police protection: It sounds like the fallout of a gang turf war or the scene of an inner city riot.

But the adversaries locking horns at the otherwise idyllic Florida retirement community known as The Villages are mobilized pensioners, not bored young criminals, and the battle they are waging has a sharp political edge.

For a retirement town designed exclusively for residents aged 55 and over, the atmosphere has been anything but sedate, with senior citizens squaring off over the polarizing figure of President Donald Trump and his Democratic rival Joe Biden.

A few years ago, people at The Villages, a sprawling community of 100,000, had other things on their minds: The town made headlines for having one of the highest rates of sexually transmitted diseases in the United States.

These days, the seniors seem more interested in the future of American democracy than in Viagra, and their omnipresent golf carts — the primary means of transportation around the vast compound with its dozens of golf courses and strip malls — are being lined up on both sides of the political divide.

The Villages came to national attention early this summer when a viral video — retweeted by Trump before he deleted it — showed one resident in a golf cart shouting “white power” as another senior, who was part of an anti-Trump protest, heckled him as racist.

One resident, a man named Ed McGinty, tweeted in June: “I got attacked today by a Trump Supporter. He was in a Support Blue Lives Police Golf Cart Parade. I got a good punch.”

And this in a place described in publicity brochures as “Florida’s friendliest hometown.”

“They’re not new, but they’re so much worse under Trump,” said Stanley, wearing her white hair in a ponytail because she has been unable to visit a hairdresser during the coronavirus pandemic. “And every year that goes by, they’re that much worse.”

As she spoke, Stanley was supervising a pro-Biden parade of more than 200 golf carts, a slow-moving procession being closely watched by police.

While the event passed off peacefully, there have been clashes in recent months.

“The last time we did this they were lying in wait for us, and had threatened to throw things at us, roofing nails, things to damage our golf carts,” said Stanley.

The golf carts, many festooned with Biden posters, slowly skirted the main square, where in pre-pandemic days residents gathered for country dancing.

Meantime, a group of Republicans congregated at the corner bakery.

In this file photo, US President Donald Trump speaks before leaving the White House on July 31, 2020 en route to Florida, a key state in the November election© AFP/File Nicholas Kamm

One of them, Henrietta Amey, displayed her enthusiasm for Donald Trump; her T-shirt bore battery-powered letters proclaiming “Keep America Great.”

“They’re a bunch of losers,” the 83-year-old said, motioning dismissively toward the procession.

Shrugging off accusations that her president might have sympathy for white supremacists or have handled the pandemic poorly, Amey insisted that “the economy is great” and that Trump had kept his election promises.

“He has taken care of illegal immigration,” she told AFP. “We like people to come here, but we like them to come legally. My parents came from the Netherlands and they came here legally and they learned English.”

She agrees that tensions have risen in The Villages but laid the blame squarely on the opposition camp.

“They will say bad words to me. And I don’t appreciate it. I just say to them, ‘Your Mama teach you to talk like that, hon?'” she said.

According to election rolls, 57 percent of those registered to vote in Sumter County, where The Villages is the largest population center, are Republicans.

For writer Andrew Blechman, author of a book about the community called “Leisureville: Adventures in a World Without Children,” The Villages is a “microcosm of what is happening in America.”

The atmosphere across the country “has gotten more heated and partisan,” he said. And in the Villages, “instead of crunching as much on Viagra, they’re as distracted as the rest of the country is by bipartisanship.”

“They live in a fantasy. They live in a make-believe world of what America looked like in the 1950s and ’60s. With fake architecture, fake history — there’s fake historical markers all over the place,” he said.

Florida, one of the most populous US states with 14 million voters, is a key swing state, with vote counts settled by the narrowest of margins — so the battle for the soul of The Villages could make a difference in the November 3 election.