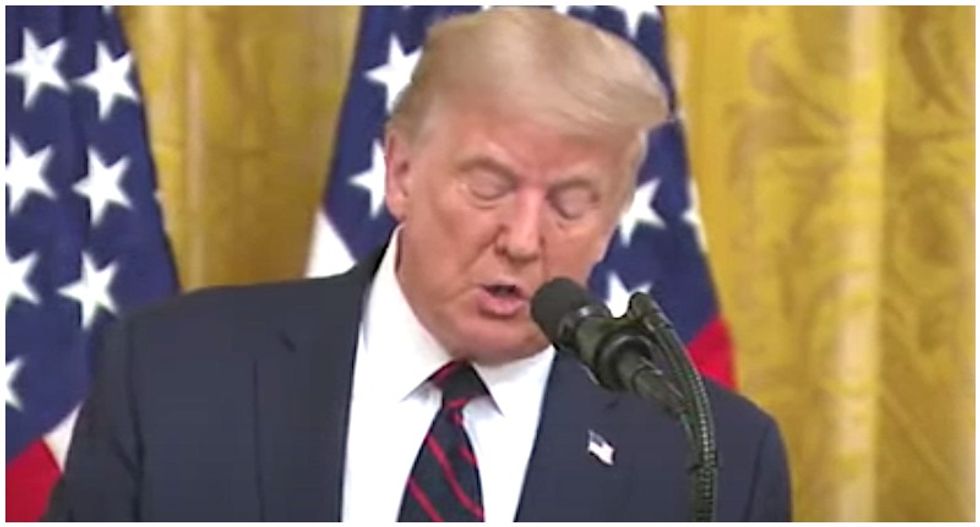 President Trump was on the receiving end of internet mockery after it became apparent that he doesn't know how to pronounce the word "Yosemite."

During a speech on Tuesday at the White House following the signing of the "Great American Outdoors Act," Trump twice pronounced Yosemite as "yo-Semite."

Naturally, Trump's critics on Twitter were a little taken aback that a president of the United States doesn't know how to pronounce a word that most people take for granted.

I can quite literally picture Kayleigh McEnany being asked about her idiot boss pronouncing Yosemite as “Yo-Semites… https://t.co/cgfQsRipBm
— Ricky Davila (@Ricky Davila)1596559718.0

Kayleigh McEnany later today: “The President did not mispronounce Yosemite. He was intentionally giving a shout out… https://t.co/b5NHLgS0Jq
— Linda Childers (@Linda Childers)1596559213.0

Joe Biden can pronounce Yosemite while drinking water with one hand. Pass it on.
— Janice Hough (@Janice Hough)1596559176.0

The next time a Trump supporter tries to tell you Joe Biden is an empty vessel, show them this... #yosemite https://t.co/bc4tbeN0Xe
— Ed Greenberger (@Ed Greenberger)1596559560.0

Trump’s talking about the National Parks, and is trying to say “Yosemite”, which is kind of a well known National P… https://t.co/PtImK6nYxv
— Mike Sington (@Mike Sington)1596559095.0

President Person-Woman-Man-Camera-TV can't pronounce Yosemite, but this is the guy who is supposed to lead us through a pandemic?
— Christopher Bouzy (@Christopher Bouzy)1596561340.0

The man can’t say Yosemite or plasma right, do you think he has the capability to pass a US citizenship test?… https://t.co/tjFoR42Ghk
— Naveed Jamali (@Naveed Jamali)1596555690.0

We all laugh, but just remember: if Biden had said this, the Trump campaign would have already cut attack ads on it… https://t.co/NEKZYGiSRo
— Mehdi Hasan (@Mehdi Hasan)1596555440.0