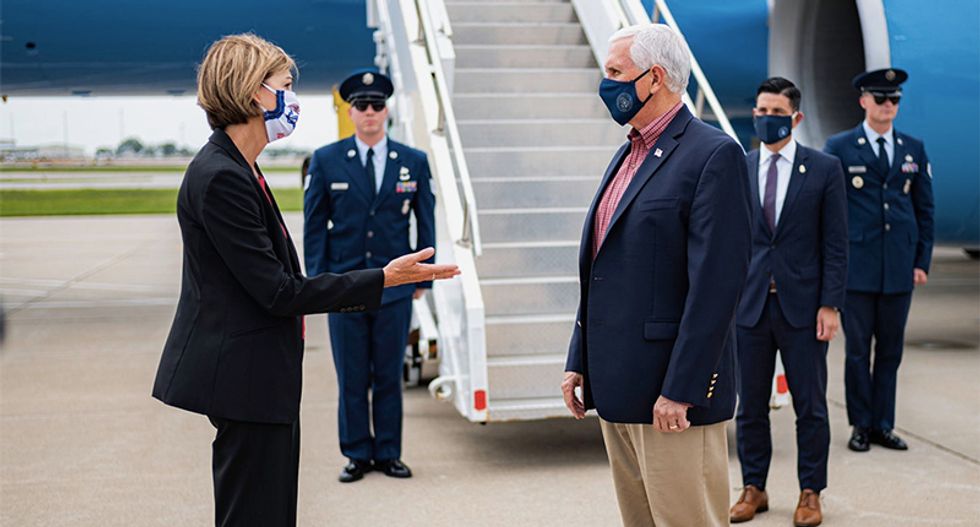 It was like a hurricane came through the state of Iowa last week with winds at 100 mph or more. It was strong enough to rip off people's roofs, tear down power lines and trees, and leave people begging for help.

The Iowa governor took nearly a week to file a request for the president for help. Now that Gov. Kim Reynolds (R-IA) is being criticized, she went to Trump, begging for an expedited presidential disaster declaration.

For some Iowans, it's been six days without power in the middle of a hot midwestern summer and a global pandemic.

There aren't cases of expedited disaster declarations, but during President Barack Obama's administration, they were issued typically within 24 hours of a disaster. It's unclear why it took Reynolds so long to ask for help or why the White House didn't step in. Vice President Mike Pence was in the state this week and told Trump-voting farmers "we are with you," after the disaster, but he left the state without any actions.

Iowa Public Radio reporter Kate Payne reported that there are people sleeping in tents on lawns because their homes aren't safe after having been torn down.

Freelance reporter and self-described "Iowa Kid," Andy Kopsa explained that taking this long for a disaster declaration is outside of the norm for the state. She used the 2008 floods as an example when a declaration was requested by the then-governor and was granted in 24 hours by former President George W. Bush. Reynold's campaign said that 2008 was different from the derecho storm because she sought a "major disaster" declaration this time. The 2008 report shows that they requested the same thing.

Kopsa went back and forth with the campaign for 21 hours. She noted that there's even a provision in the law that would allow Gov. Reynolds to admit she can't handle the disaster, and it would appoint a nonpartisan federal coordinator to liaise between the state and the federal government. Reynolds then suggested she could use CARES Act funding, which is illegal.

Mike Pence came to Iowa on Thursday - Reynolds pushed back her presser to Friday because of entertaining duties at… https://t.co/qZttULxuc4
— Andy Kopsa (@Andy Kopsa) 1597519646.0

While I am working an exhaustive story about all of this since everyone's hair is finally on fire I just figured --… https://t.co/isosVlxaUD
— Andy Kopsa (@Andy Kopsa) 1597519648.0

As of Sunday, there were still about 100,000 people without power.

See some of the comments from Iowans below:

This is the situation at Westdale apartments in Cedar Rapids. Home to many refugees. This unit was declared unlivab… https://t.co/r5NiHiCE6y
— Kate Payne (@Kate Payne) 1597518120.0

The closest thing I can compare the damage I have seen in Cedar Rapids to is what I saw in New Orleans post-Katrina… https://t.co/AvE0CsZrRI
— Zach Wahls (@Zach Wahls) 1597538818.0

The President's legal authority to do this is suspect. But his authority to declare a natural disaster in Iowa is b… https://t.co/m06dqAJZxV
— Scotty (@Scotty) 1597573883.0