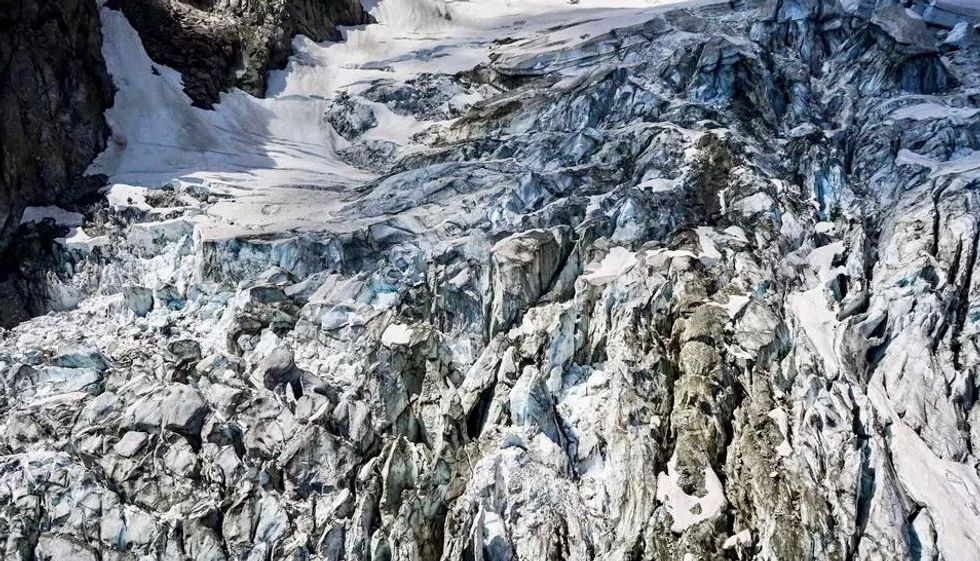 An Italian alpine resort remained on high alert Friday over fears a vast chunk of a glacier on the slopes of the Mont Blanc massif could plummet in high temperatures.

"No one gets through! No cars, bikes or pedestrians," was the message at a checkpoint where an automatic barrier and two guards blocked the small tarmac road snaking up into a lush valley below the Planpincieux glacier, not far from the town of Courmayeur and the Italian-French border.

But the blockade has largely been greeted with contempt by the locals, one of whom told AFP "it's a joke".

The huge ice block measuring around 500,000 cubic meters -- "the size of Milan cathedral or a football pitch covered in ice 80 meters (260 feet) thick" according to an official -- could yet break free of its perch about 2,600 to 2,800 meters above sea level.

Late Wednesday, authorities ordered the evacuation of a "red zone" at the base of the slope for at least 72 hours, so far moving just 75 people -- around 20 locals and the remainder holidaymakers.

At this time of year, the small Val Ferret valley now blocked off is usually busy with tourists heeding the call of the mountains.

Located in the Aosta Valley region, the spot is not far from where a vital road tunnel pierces the Alps between France and Italy.

But the "red zone" is at least four kilometers from the tunnel entrance, while tourists could still be seen strolling through the streets of Courmayeur.

It was "urgent and vital" to move people directly in the path of a potential ice fall, Courmayeur mayor Stefano Miserocchi said, highlighting an "elevated state of alert" during the 72-hour evacuation.

The coming three days are expected to bring especially high temperatures as much of Europe sizzles under a heatwave.

There are more than 4,000 glaciers -- vast, ancient reserves of ice -- dotted throughout the Alps, providing seasonal water to millions and forming some of Europe's most stunning landscapes. But they are under severe threat from climate change.

A study last year by Swiss scientists found that Alpine glaciers could shrink between 65 and 90 percent this century, depending on how effectively the world can curb greenhouse gas emissions.

At Planpincieux this week, "it's an especially delicate situation because (the temperature) upsets the water level between the ice and the rock, and in turn the stability of the glacier," Aosta Valley natural risk management director Valerio Segor told AFP.

"Our problem now is that not enough water can escape, it stays under the glacier like a bubble and risks lifting it up" -- which could prompt its most fragile section to tumble into the valley, Segor added.

Last autumn, another section of ice from the Planpincieux glacier threatened to collapse, prompting road closures in the area, and heightened surveillance has since been introduced.

In Courmayeur, as in the small neighboring commune of La Palud, leading to Val Ferret, the evacuation came as an unwelcome surprise, arousing criticism from residents and tourism professionals, worried about the impact on their activity.

In this typically Alpine hamlet, wooden chalets with slate roofs and balconies festooned with pink geraniums and greenery nudge up against hotels and restaurants which advertise their inviting "mountain menu".

"I looked at where the glacier was, where the danger was. It doesn't affect the centre of Courmayeur at all so we continued the visit", says Loic Hamelin, a Parisian tourist who came for the day with his family.

The threat does not appear to have put off the walkers for an instant as they bustle through the streets with backpacks and boots to start a trail.

"Every year, they (the local authorities) do the same thing to us. After the COVID-19 epidemic, it's a new disaster for tourism.

"We have been receiving calls from worried customers asking if they should cancel their reservation. But there is absolutely no problem!"

Another hotelier in the area, Ludovico Colombati, was equally dismissive after having to evacuate his house, which is "the closest to the glacier", just under two kilometers away.

"We live in the mountains, so there is always a risk. But in this case, it is very, very, very low," says Colombati, whose family has lived in the valley for four generations.

"With climate change, the hot summer, the glacier moves, blocks are detached, it's normal," he said, criticizing the "psychosis" of administrators "who cover themselves for fear of having to assume the slightest responsibility".

"Several times a day, my ears hear the glacier being triggered... That's life in the mountains, especially when you live at the foot of a wall.

"The day after tomorrow, it will be all open," he says.