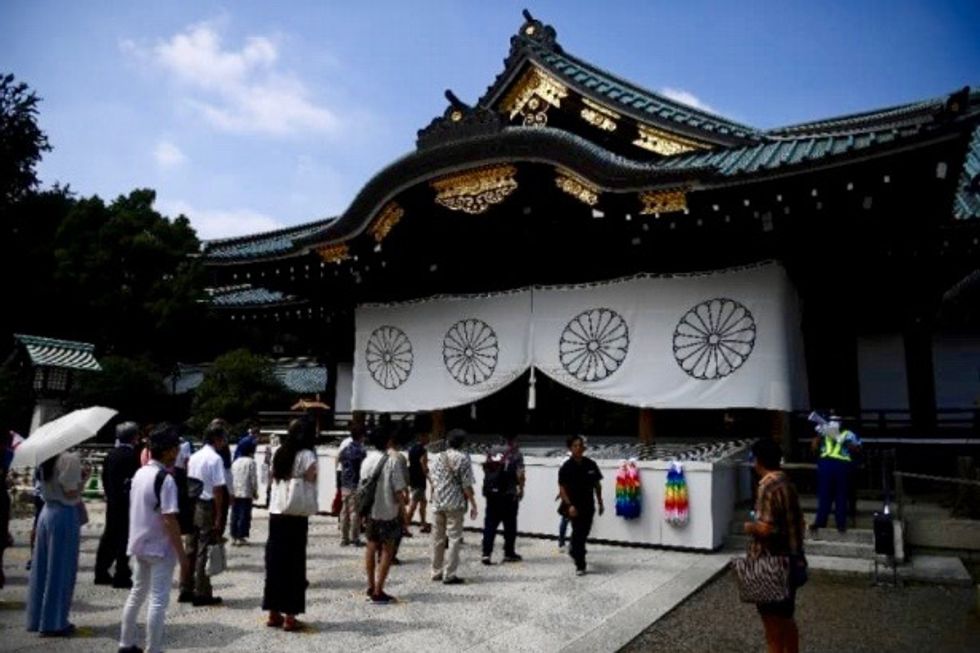 Four Japanese cabinet ministers paid their respects on Saturday at a war shrine seen by neighboring countries as a symbol of Tokyo's past militarism, in the first such visit since 2016.

Nationalist Prime Minister Shinzo Abe sent a ritual cash offering to the Yasukuni Shrine in central Tokyo to mark Saturday's 75th anniversary of Japan's surrender in World War II but was not expected to visit in person, local media said.

But it also enshrines senior military and political figures convicted of war crimes by an international tribunal after the war.

Education Minister Koichi Hagiuda, one of the four ministers to visit the shrine, said he did so to pay tribute to the war dead.

"I paid respects... to the souls of those who nobly sacrificed themselves during the war," Hagiuda told reporters.

Abe last visited the shrine in December 2013 to mark his first year in power, sparking fury in Beijing and Seoul and earning a rare diplomatic rebuke from close ally the United States.

This year's visits come with tensions still high between Japan and South Korea -- one of the countries that suffered most from Japan's wartime military atrocities.

The two countries have issued reciprocal trade sanctions and threats as they battle over issues including wartime forced labour and sex slavery.

Seoul is "ready to sit face to face at any time" with Tokyo to discuss historical disputes, South Korean President Moon Jae-in said in an address commemorating the country's liberation from Japanese colonial rule in 1945.

The issue of forced labour has been a thorny issue between the two neighbors, with Tokyo saying all reparation claims were settled in a 1965 treaty that normalized relations with financial contributions.

But the South Korean Supreme Court ruled in 2018 that victims had a right to seek compensation. Moon's government has said it respects the ruling and will seek a "smooth resolution" with Japan.

"The door for consultations is still wide open," Moon said in his Saturday speech.

Later in the day, Emperor Naruhito and Empress Masako attended a national ceremony to mark the anniversary, which had been scaled back because of the coronavirus.

"Looking back on the long period of post-war peace, reflecting on our past and bearing in mind the feelings of deep remorse, I earnestly hope that the ravages of war will never again be repeated," said Naruhito, who took the throne in May last year from his father Akihito.

Naruhito was born well after the conflict and has spoken of the need to "correctly" remember World War II, without downplaying Japan's early-20th-century militarism.

It was his grandfather Hirohito who announced Japan's defeat on August 15, 1945, in an unprecedented radio address that was the first time the country's citizens had heard the monarch's voice.