Jared Kushner gets salty with CBS host after she asks about COVID: 'That's a very negative framing' 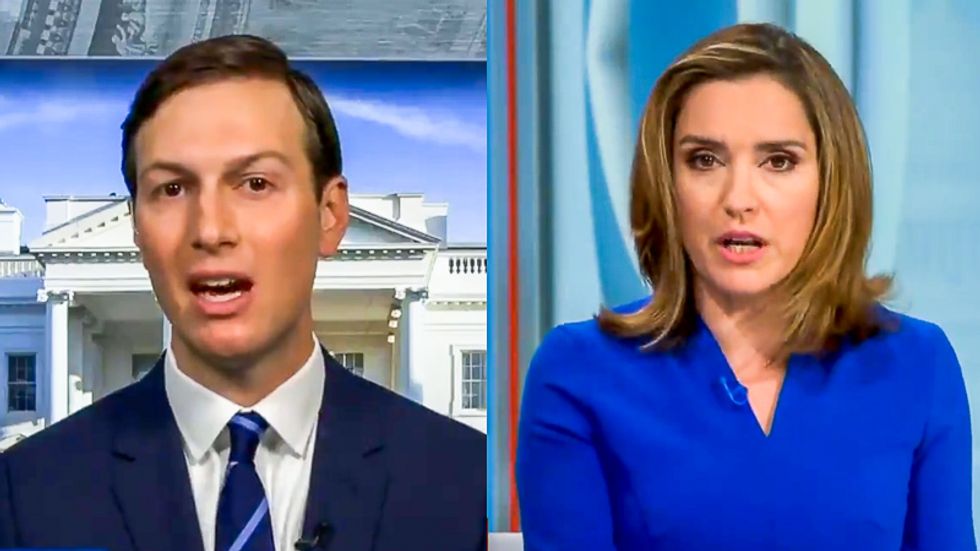 White House adviser Jared Kushner appeared to be irritated with CBS host Margaret Brennan on Sunday after she asked about COVID-19 and President Donald Trump's crusade against mail-in voting.

Brennan began her interview with Kushner by offering her condolences on the loss of the president's brother, Robert Trump.

"Obviously a very tough moment for the president, but he is looking forward to continuing to do great things and make his brother proud," Kushner said.

The CBS host went on to press Kushner about his role in fighting the COVID-19 pandemic.

"Do you believe the administration has control of the virus, and what do you think you've done wrong?" Brennan wondered.

After several more questions about the pandemic, Kushner tried to push back.

"I came on today to talk about the historic breakthrough that the president achieved for peace in the Middle East," the president's adviser complained. "This has been a strategy we've been working on for the past three and a half years."

Brennan, however, pressed Kushner about whether he would be sending his children back to school in person.

"Children have a six times higher chance to die from the flu than from the coronavirus," Kushner opined. "So based on the data I've seen, I don't believe that is a risk."

Kushner also revealed that he would be sending his children to a school that is not open for a full five days a week.

"I want to ask you about the election before we go to the Middle East," Brennan said, further frustrating the White House adviser. "Are you worried you may disfranchise some of your voters by not giving aid to the postal service now?"

"I'll give you a quick answer on that," Kushner offered. "I have a friend in New Jersey who just got married, and she got sent two ballots, one in her old name and one in her new name. I think what President Trump wants is a fair system."

"You're not afraid this could backfire on your own campaign?" Brennan asked again.

"Look, we have a great operation. We're very confident. We're in much better shape than in 2016," Kushner shot back. "We think we have a great opportunity. Again, just like President Trump achieved the historic Middle East deal, which I hope we'll get to talk about."

Brennan finally turned to the subject of the Middle East, but Kushner was not happy when she observed that the conflict between Israelis and Palestinians "remains unaddressed with what you just negotiated."

Read the transcript of Jared Kushner's interview on CBS.

BRENNAN: But what is the White House task force's coronavirus strategy? Do you think you have control of the virus?… https://t.co/Gk5lH5gmeJ
— Aaron Rupar (@Aaron Rupar) 1597589701.0