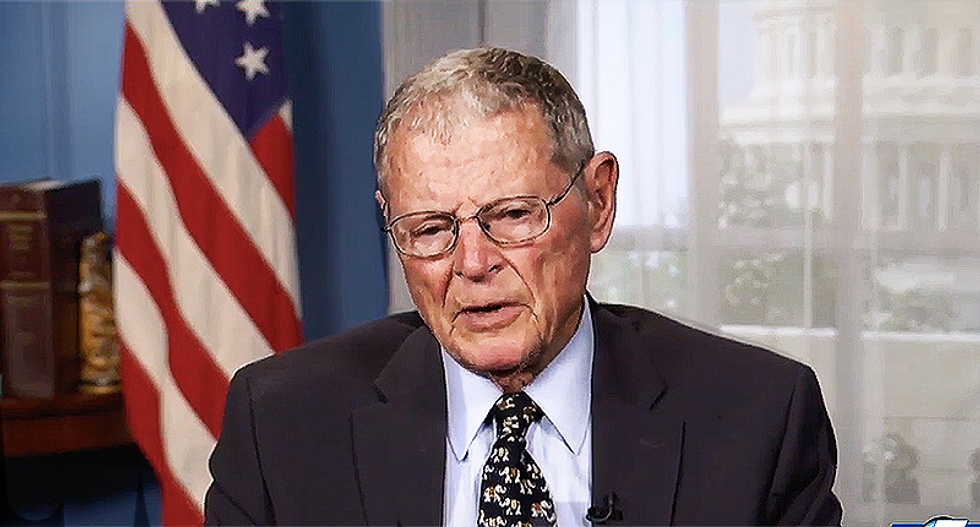 Sen. Jim Inhofe (R-OK) turns 86 this year, and it's unclear if he's forgotten the promise he made to his voters to root out corruption in Washington. The four-term incumbent has been linked to a lobbyist-turned-senate-staffer-turn-lobbyist-then-staffer again for the Senate Armed Services Committee.

Meet John Bonsell, who was appointed to the Senate Armed Services Committee (which Inhofe chairs) in 2018, and that promotion was a long time in the making.

Bonsell started working for Inhofe in 2001, but he left in 2007 to become a Vice President of Robison International Inc, a D.C. lobbying firm. The following year he joined an Altus, Oklahoma company named Aviation Training Consulting (ATC), because they hoped to obtain some contracts from the federal government. Bonsell appeared to have delivered because, by September, he'd scored $582,295 worth of contracts for the company in a single month.

Aviation Training Consulting received its first-ever defense contract, acquiring $582,295 worth of contracts his first month on the job.

Lobbyists often use their past relationships on the Hill and parlay that into lucrative government contracts. What is different in the Inhofe case, however, is the back and forth between the government and lobbying offices -- and that the contracts continued to flow in with Inhofe's enthusiastic endorsements when the lobbyist moved back to a taxpayer-funded Senate office.

Bonsel left Robison International after a little under four years, going back to Inhofe's Senate staff. Staff for his two lobbying employers, Robison and ATC, forked over $20,100 to Inhofe’s campaign along with $8,800 coming directly from Bonsell. ATC CEO Robert Cox and his wife maxed out to Inhofe's campaign at $6,700.

Once Bonsell went back to the Senate office, Aviation Training Consulting had been handed a total of $11,558,584 in defense contracts in less than four years -- something the GOP senator celebrated. At that time, the Republicans had taken over Congress and the Senate and had shut down all of President Barack Obama's pieces of legislation and judges, and provoked a government shutdown in 2013. Inhofe also began speaking out publicly in favor of a deal between the small Altus company and Sikorsky, a subsidiary of Lockheed Martin.

ATC had hoped to have a Blackhawk Helicopter school in Altus, but the deal fell through, and Sikorsky backed out. Inhofe publicly expressed his disappointment, saying that he and his staff had been in contact with Sikorsky on the proposed partnership with Aviation Training Consulting.

After that, Bonsell left Inhofe's office to go lobby for the defense industry again. He was able to score $37,229,253 in government contracts. When Inhofe took over the Armed Services Committee in 2018 after Sen. John McCain passed away, Bonsell joined the committee along with him.

Something strange happened this year, however. The Altum Trading Company in Altus turned up again in Inhofe's life. His campaign started renting offices at the same office address in Edmond, Oklahoma: at 3540 S Boulevard Suite 350. The building is accessible and was able to explain it is merely the Edmond branch of the group. Based on the building's listings, the office would be around 75 square feet given Inhofe only paid $120 a month.

As of June 2020, Inhofe’s campaign hasn't reported paying rent for any other office space. In fact, according to the Oklahoma Secretary of State's office, three businesses operate out of the same office and all of them link back to Aviation Training Consulting: Altum Trading Company, Aviation Training Company (official Edmond Location), and ALTUM-ATC JV LLC.

Aviation Training Consulting has gotten a total of $216,837,028.83 in defense contracts since hiring Bonsell to lobby for them in 2008, with the most recent reported contract being signed just a day after Inhofe’s campaign started renting the office.

Other than the revolving door of lobbyists, another problem is that it doesn't seem to be clear what exactly Altum Trading Services does. Altum Trading Company LLC was formed on August 10th, 2017. That same day, the company registered with the System for Award Management for providing flight training and Other Aircraft Parts and Auxiliary Equipment Manufacturing. Those are the same services for which Aviation Training Consulting receives contracts.

“Altum Trading Company provides contract services and solutions for the U.S. Government, Department of Defense and its allies," their website says. No contracts have ever been awarded to Altum Trading Company, LLC and only two people list it as a past employer, both of whom say they were "flight dispatchers."

Inhofe has spent the past several years advocating for record-high defense spending, even buying stocks in defense contractors.

If the swamp seems to be a little more populated with creatures it might be due to Inhofe's campaign renting campaign space the size of a closet in an office of a company that wouldn't have any contracts without Inhofe's top military staffer. Even if the staffer is doing everything above board, Inhofe is still getting a pretty sweet real estate deal well below fair market value from a defense contractor that has given him donations and regularly lobbies him for contracts. That's a Federal Elections Commission and ethics violation at the very least.