John Dean helped bring down Nixon. He says Trump is unleashing a nightmare that is far worse 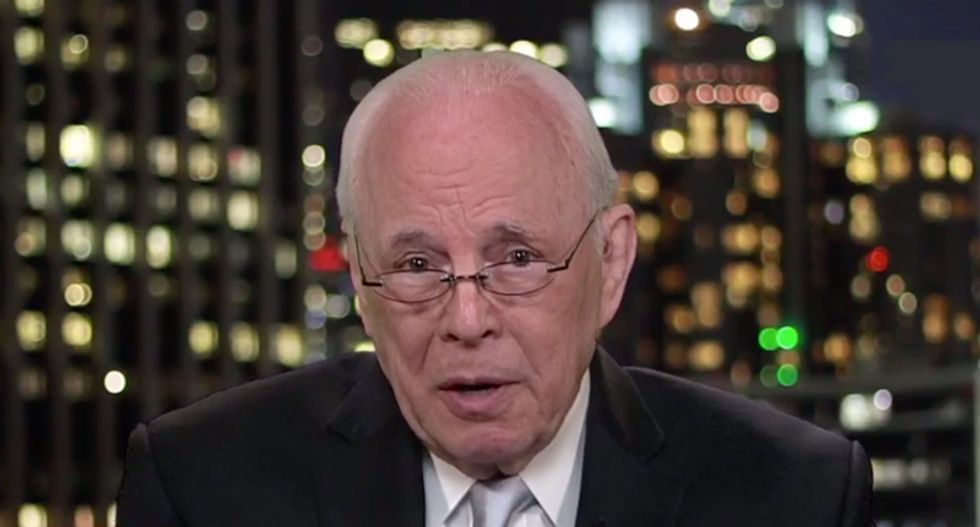 As President Trump is set to accept the Republican Party’s formal renomination for president amid ongoing scandals and multiple crises, we spoke with John Dean, who served as the White House counsel for President Richard Nixon from 1970 to 1973. His testimony during the Watergate scandal helped bring down Nixon. His new book is “Authoritarian Nightmare: Trump and His Followers.” “I worked for the last authoritarian president we had,” Dean says. “Trump is of a different cut than Nixon. … He’s going to make Nixon look like a choir boy before it’s all over.”

AMY GOODMAN: Well, as President Trump is set to accept the Republican Party’s formal nomination for president tonight amidst ongoing scandals and multiple crises, we’re joined by John Dean, who served as the White House counsel for President Richard Nixon from 1970 to '73. His testimony during the Watergate scandal helped bring down Nixon. Well, John Dean has a new book. It's written with Bob Altemeyer, and it’s titled Authoritarian Nightmare: Trump and His Followers.

John Dean, welcome back to Democracy Now! It’s great to have you with us. If you can respond to what Pence talked about last night and what he didn’t, and, of course, the significance of the Trump presidency?

JOHN DEAN: Well, it’s quite clear what they’re doing is not new. If you go back to the reporting of Hunter Thompson, who described this kind of convention as “fear and loathing,” I think Hunter had his finger right on it. This is what we’re seeing again, Amy. They’re trying to stir up their support by, first of all, creating fear, creating uncertainty — this drives their authoritarian followers into their ranks — and a little loathing, for those prejudiced people who are also so much a part of these followers.

AMY GOODMAN: Why did you call your book Authoritarian Nightmare?

JOHN DEAN: Well, what happened — as we were finishing the book, we had already titled it Authoritarian Nightmare, and we thought we had a pretty horrid list of things that had occurred during this presidency. Then came COVID-19 and the racial unrest and the great conversation we’re having now on that issue. So, it really is a nightmare, because Trump’s followers tolerate his norm-busting, his undemocratic behavior. And that, to us, is a nightmare.

AMY GOODMAN: Very interesting, of course, tonight he’ll be on the South Lawn. They’re saying more than a thousand people will be there. Last night, the lack of masks. I mean, here you had Vice President Pence, who is head of the coronavirus task force, but his audience and Trump coming in at the end to shake people’s hands, to greet people, as well as Pence. I want to turn to a phone interview President Trump did with Fox & Friends in May after the Department of Justice dropped charges against Trump’s former national security adviser Michael Flynn, even though Flynn twice pleaded guilty to lying to the FBI about his communications with the Russian ambassador. Trump said he learned a lot from Richard Nixon during the federal investigation of his 2016 campaign ties to Russia.

PRESIDENT DONALD TRUMP: I learned a lot from Richard Nixon: Don’t fire people. I learned a lot. I study history. And the firing of everybody, I should have, in one way, but I’m glad I didn’t, because look at the way it turned out. They’re all a bunch of crooks, and they got caught. But I learned a lot by watching Richard Nixon. Of course, there was one difference, one big difference. Number one, he may have been guilty. And, number two, he had tapes all over the place. I wasn’t guilty. I did nothing wrong. And there are no tapes.

AMY GOODMAN: So, John Dean, you were the man whose White House — whose Watergate testimony helped to lead to the downfall of Richard Nixon. You talk about what it’s like to work for a vindictive president. But even Nixon, you say, doesn’t have the raw lust for power that Donald Trump does. Talk about what he just said and what he’s done, and the comparisons you see between Richard Nixon then and President Trump today.

JOHN DEAN: Amy, I worked for the last authoritarian president we had. That was Nixon. I learned a lot observing, watching what I was doing right then and there. We’ve had very few authoritarian presidents, depending on exactly how you define them, but as generally social science looks at these people: Andrew Jackson, Woodrow Wilson, Richard Nixon and now Donald Trump. There’s a very unique governing style in these people. And that is, they don’t really want to hear anything from their aides other than obedience. And we’re seeing that at this time.

The lesson that he learned from Nixon is “don’t get caught,” because Nixon was caught. And so, he said, “Well, of course, he was guilty, so that’s different than me.” Well, Nixon did not think he was guilty, but Nixon, when cornered, was willing to follow the rule of law. What concerns me about Trump, I don’t think Trump will do what Nixon did. He certainly wouldn’t concede during the impeachment proceeding that he had done anything. Richard Nixon didn’t take the country through an impeachment proceeding. So, Trump is of a different cut than Nixon. I think, in fact, Amy, he’s going to make Nixon look like a choir boy before it’s all over.

AMY GOODMAN: You said Trump should have been impeached on the first day. Why?

JOHN DEAN: Well, because, first of all, his behavior during the campaign, where he reached out and obviously colluded with Russia. We now have it by the Senate Intelligence Committee, where nine Republicans joined in in the report and show very clear collusion. This is just unprecedented. So, this president needs to go. And the only way to force him to go is for people, in a tsunami-style election, to remove him.

AMY GOODMAN: We just talked about LeBron James coming up to Washington, leaving the bubble of the basketball court to protest President Trump. Can you talk about how Nixon dealt with protests, how he cared about protests, and Donald Trump, what he does? And then talk about the Republicans who have come out, one by one, supporting Joe Biden.

JOHN DEAN: Nixon pretended not to be fazed by demonstrations, yet exactly the opposite was true. One of my jobs was to monitor demonstrations. And during the height of demonstrations, he wanted hourly reports as to what was happening, that we would get from law enforcement. So, they did make a big impact.

The demonstrations today are not focused on the White House, and so Trump is using them as a law-and-order issue to try to say that he has federal authority to go into places like Portland or Kenosha and bring peace. Well, that really isn’t his responsibility or his obligation, or should he really be doing that. We haven’t federalized law enforcement; it’s state function. So, I think that what Trump is doing is he’s really pushing this because it’s a campaign issue.

His followers, the people we deal with, and we think it’s essential that Americans understand, in our book, they want to be felt — they want to feel comfortable. They want to feel a strong leader. So that’s what he’s playing to. It’s not that he knows this body of science we report on. It’s just, intuitively, he knows what to do. And that is to give them the impression that daddy’s taking care of everything.

AMY GOODMAN: You wrote this book with Bob Altemeyer, a psychology professor who’s a specialist in authoritarianism, to see why Trump’s base is so faithful to him, no matter what he does. You ask the question: Why do evangelical Christians support him, for example, despite his well-documented sexual predations? And now, of course, Jerry Falwell Jr. has just had to step down as head of Liberty University because of a sexual scandal, as well. He was an early supporter of President Trump when he was running for president, extremely significant in Trump’s success. You talk about why do many working-class Americans support him, despite the way he works against their interests. Talk more about your psychological approach to Trump, and what you think has to be done right now.

JOHN DEAN: Well, I have actually been on this subject for some years. Over a decade ago, I did a book called Conservatives Without Conscience. And Bob Altemeyer was very helpful when I was trying to understand the religious right and how they had become fairly dominant in the Republican ranks. And I discovered that’s where the authoritarian personalities, both leaders and followers, had taken over the conservative movement.

Bob Altemeyer was as stunned as I was that no one was reporting on what was happening during the primary race and the 2016 campaign when Trump was running, who his supporters were and how much science was available studying these very kinds of people and why they do what they do. It’s more than soundbites. But to understand them is to realize they’re frightened people, and there are ways to deal with them.

But the way that they are proceeding now is he’s just baiting them, and the demonstrations in the street are playing into his campaign, give me some concern that indeed this could help him to victory, if enough people think he’s going to solve the problem of demonstrations.

So, I’ve been on this issue a long time. Altemeyer has spent his lifetime. It’s a career of science. And what was, Amy, most exciting about this project is, as we started it, we didn’t how it would play out fully in the United States. Most of the experiments were done in Canada, in small university towns, with students and parents. Well, we had the Monmouth Polling Institute run a national survey. From a base of about 230,000 people, we got a good sampling of about just under a thousand people.

JOHN DEAN: The Conman Scale. We gave people all the key tests, personality tests. And we found that authoritarianism is ripe and ready and certainly in play. And it explains Trump’s base.

AMY GOODMAN: Let me go to President Trump speaking to delegates at the RNC on Monday.

JOHN DEAN: We found in the poll that about 24% to 29% of his followers will tolerate him ignoring the Constitution if he loses the election. That’s troubling.

AMY GOODMAN: John Dean, I want to thank you so much for being with us, served as White House counsel for President Richard Nixon from 1970 to ’73. His testimony during the Watergate scandal helped bring down President Nixon.

And that does it for our show. The book is called Authoritarian Nightmare: Trump and His Followers.