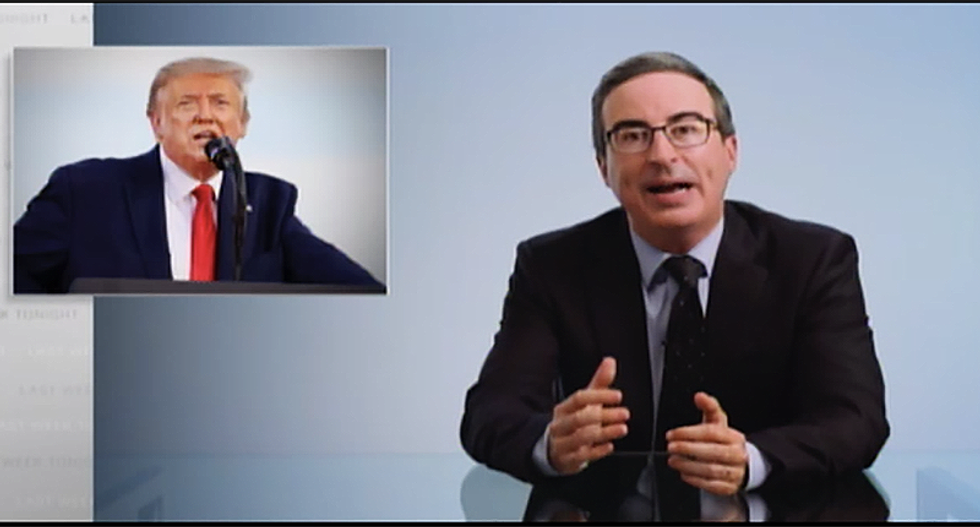 HBO host John Oliver walked through the lack of information people seem to have about the history of the United States, despite taking history in school. He then drew a line to show that lack of honesty in education is contributing to the ignorance of not only President Donald Trump but right-wing commentators like Laura Ingraham, and a slew of other Americans.

During his main segment on "Last Week Tonight," Oliver began with the fact that Trump's reelection campaign didn't know that June 19 was a holiday called Juneteenth celebrating the freedom of slaves by the Emancipation Proclamation.

He noted that some of the worst problems about teaching American history is that an overwhelming majority of it is whitewashed to make white people look like the saviors of people of color and downplayed violence against African-Americans.

Oliver explained that the myth of American exceptionalism is another way of lying to children about reality.

"The fact that the Constitution is infused with racism does not mean it's canceled," Oliver explained, citing the hyperbolic freak-outs among Fox News hosts like Laura Ingrahm. "It's not a YouTuber who just realized that it was wrong to do blackface for fourteen years, and it definitely doesn't mean that kids shouldn't learn about it. They should be taught to see it as an imperfect document with imperfect authors, which both extolled the idea of freedoms for all while codifying slavery. That is possible to do. You can also understand that something can be racist and also be other things. The Constitution can be revolutionary and also racist. Movies can be romantic and also racist. Children's books can be charming and also racist."

Showing a photo of Ingraham, Oliver explained that "broadcasters can be extremely successful and also racist."

But if children aren't taught about the complexities of a world that isn't merely black and white, they won't have the framework to understand it, Oliver said.

The true history of America, Oliver explained, "is change." But it comes "in an America that badly does not want to be changed." He noted that too often, history is viewed through a lens of a belief that things were constantly inevitable. Things didn't constantly rise for Blacks who fought for their freedom. With each success came such overwhelming backlash that it necessitated additional movements. The Emancipation Proclamation should have been the end of slavery in America. Instead, whites fought back so hard against change that it took another 100 years for the Civil Rights movement to stop the oppression again. Sixty years later, another movement is upon us, with white supremacists claiming that asking police not to shoot unarmed Black people is somehow anarchy.

Oliver brought up the only coup d'etat on American soil, which was when a lynch mob of white North Carolinians invaded Wilmington, a majority-minority town and violently overthrew the Black city officials, and killed 60-300 people (depending on reports).

In the 1960s, racist Americans ushered in an era of "white flight," where they fled to the suburbs as an effort to escape living near Black people. Schools were integrated, so whites looked for other neighborhoods where they could bar people of color using municipal zoning laws, which kept their schools white.

Citing Lee Atwater, a Republican campaign strategist who worked for, among others, Ronald Reagan and George H.W. Bush, Oliver explained how overt racism evolved into creative ways to hide racism from the growing number of supportive whites.

Oliver noted that Atwater's explanation is a pretty good history of "certain threads in politics" for the past half-century.

Today, when President Donald Trump tweets about the suburbs being destroyed by "low-income housing," what he's really saying to white America is he'll save them from being forced to ever come in contact with a Black person by slashing the Fair Housing Act.

"That is a campaign promise crafted by Lee Atwater," Oliver explained.

See his full takedown of Trump, the GOP and Fox News below: