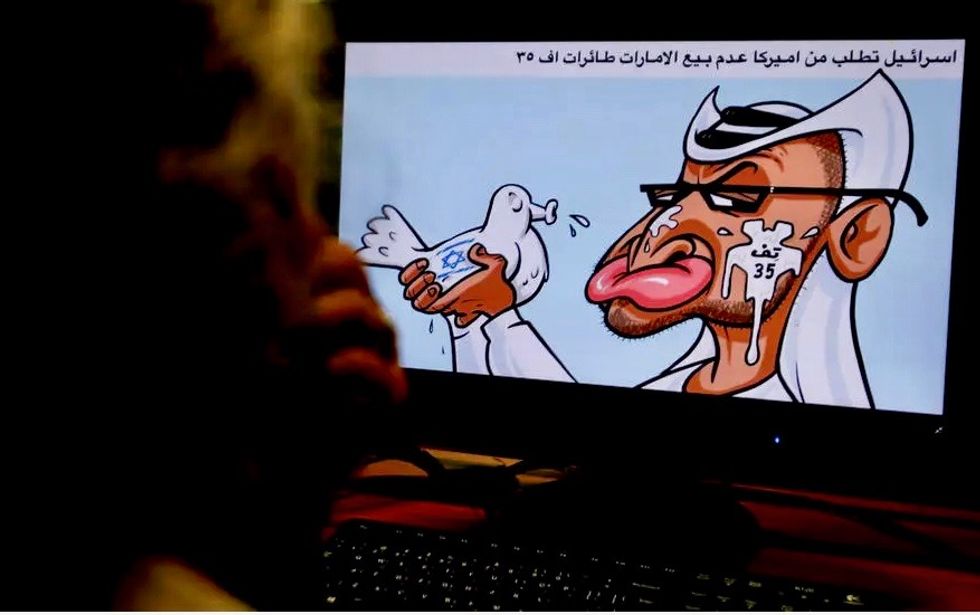 Leading Jordanian cartoonist Emad Hajjaj was arrested and charged on Thursday with seeking to undermine Jordan's relations with a "friendly country" after publishing a drawing criticizing the Israel-UAE peace deal.

A judicial source told AFP that the Amman general prosecutor referred Hajjaj to the state security court, a military tribunal, over a cartoon deemed "offensive for the United Arab Emirates".

"The prosecutor charged Hajjaj of carrying out acts and publishing material aimed at undermining relations with a friendly country and referred him to the state security court," the source said.

Hajjaj published the drawing on Wednesday on his Facebook page and hours later he was arrested and brought in for questioning.

Thursday afternoon the prosecutor general decided to keep Hajjaj in detention for 14 days pending an investigation.

If found guilty, Hajjaj can face up to five years in jail.

The cartoon is titled "Israel asks America not to sell F-35 planes to the Emirates".

It shows Abu Dhabi Crown Prince Mohamed bin Zayed Al-Nahyan holding a dove with the Israeli flag painted on it, spitting on the face of the top UAE official who is also known as MBZ.

"Spit-35" is seen written in Arabic in the spittle covering the UAE leader's cheek.

Israeli Prime Minister Benjamin Netanyahu has denied reports that the UAE deal hinges on the sale of US F-35 stealth fighter jets to the Emirates, saying he opposes a move that could reduce Israel's strategic edge in the region.

The 52-year-old Hajjaj is a popular cartoonist in Jordan and in the Arab region.

His drawings have been published in several Jordanian newspapers but also in Arab ones abroad, and mostly focus on political, economic and social issues.

In 2017 he had a brush with the law after publishing a cartoon deemed offensive to the Greek Orthodox Church and in 2000 he was sacked from Jordan's leading Al-Rai newspaper over a controversial drawing.