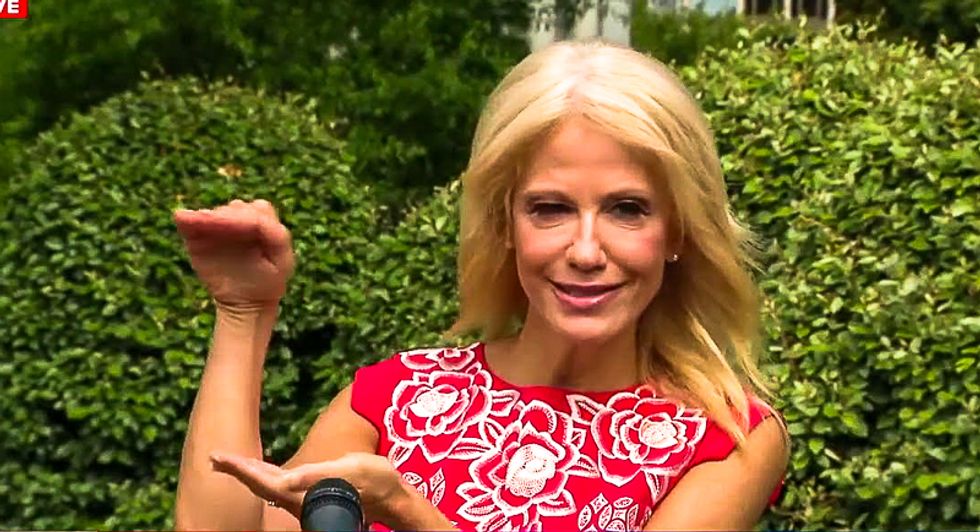 White House adviser Kellyanne Conway suggested on Wednesday that Vice President Mike Pence is the victim of "sexist" news coverage which does not report on his wardrobe.

While speaking to reporters outside the White House, Conway reacted to the news that Sen. Kamala Harris (D-CA) had been selected as Democratic presidential candidate Joe Biden's running mate.

Conway argued that other women -- like herself -- had made history before Harris was chosen as the presumptive vice presidential nominee.

"We can't say certain words or certain words mean a certain thing," Conway opined. "And I'd be careful about that, not just because all of those words are said by all of you about people like me but also because I guess we don't treat all women the same, especially women who were the first and made history. But that's alright. I'll have my say one day."

The presidential adviser then attacked the media for not giving Pence the same kind of coverage as Harris.

"People excited about what jacket she's going to buy," Conway said of the Harris' coverage. "And just giggling, some girl time in a dressing room."

"You have The New York Times do a big spread, I mean, a wall-to-wall picture of Kamala Harris as opposed to Mike Pence," she continued. "So I really hope we're going to see fair coverage because America deserves that."

"Instead of saying, 'You look nice in this jacket,' and by the way, how sexist," Conway said, "I guess the best question for Kamala Harris is, do you support defunding the police? Joe Biden has said he doesn't."

Watch the video below from FOX.