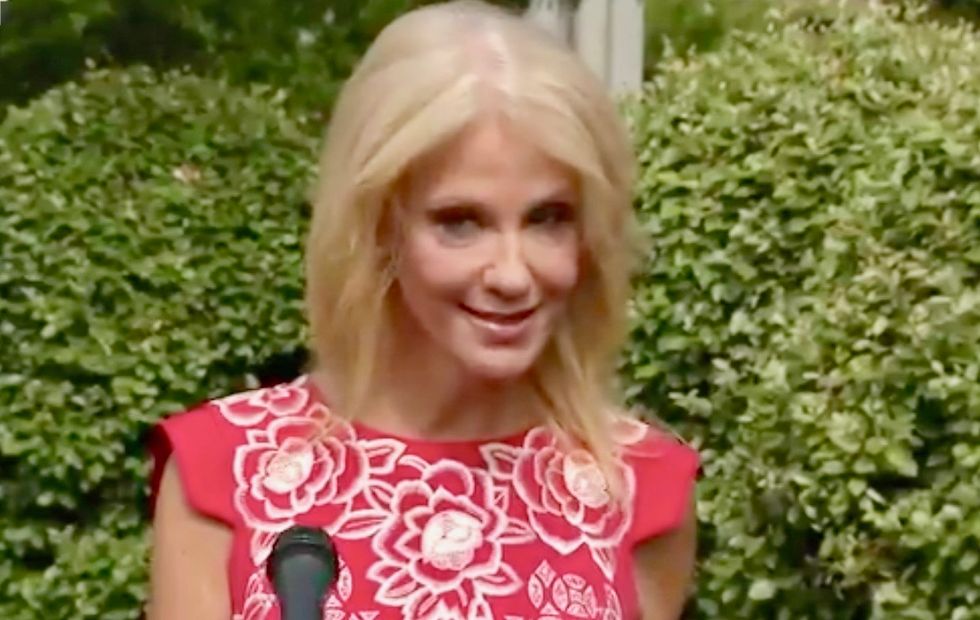 The Hatch Act is a federal law that bans certain federal government officials from engaging in political activities while in their role as executive branch employees.

Counselor to the President Kellyanne Conway is the poster child for breaking that federal law. Her violations have become so blatant that last year the Office of Special Counsel (OSC) recommended to President Donald Trump that Conway should be fired for violating that law. Trump refused, and Conway continues to ignore it, as she did just minutes ago.

Speaking to reporters in her role as a presidential aide Conway, standing in front of the White House, attacked presumptive Democratic vice presidential nominee Kamala Harris.

Not only did Conway attack Harris, she did so for Harris upholding the law – a law Conway's boss, President Donald Trump supports.

Kamala Harris "put people away for marijuana use and then she let go, people, gave plea deals to defendants who had done far worse than marijuana use. She is going to be expected to answer for that record," Conway told reporters Wednesday.

President Donald Trump supports keeping marijuana as an illegal substance – he even supports executing drug dealers. Joe Biden has suggested he would legalize marijuana, and supports states that do.

Kellyanne on Kamala: "She put people away for marijuana use and then she gave plea deals to defendants who had done… https://t.co/JZmEMhMTwQ
— The Recount (@The Recount) 1597245955.0

"I think that this country, we can do two things," Conway also told reporters. "I think we can stand up and take a moment to applaud when history is made, and then take a moment to say why somebody who seems forward looking would actually bring us backwards as a nation through her record, and her policies and her beliefs. But she's part of a ticket that has that problem. Sen. Harris cannot cure the flaws and the inadequacies at the top of the ticket."

Conway did not mention  her boss.