Kellyanne Conway whines about 'belittled' Trump fans: 'Every night it feels like Thanksgiving with the in-laws' 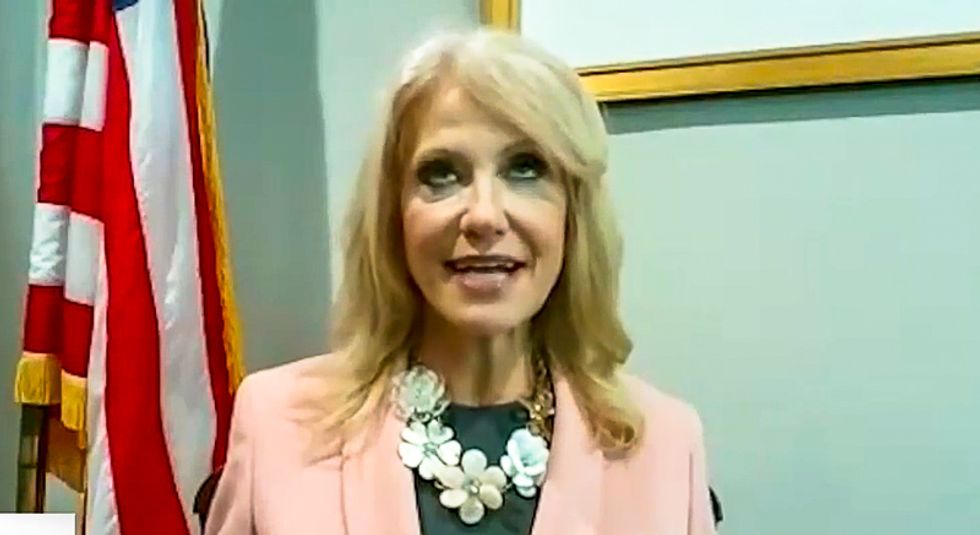 Conway made the remarks while speaking to TV host Greta Van Susteren.

"I don't want anyone to interfere in our election," the president's adviser said when asked about Russian election interference. "Any foreign government, any foreign actor. And I don't want the domestic media to do it either, through some of their phony polls and through them insisting that Donald Trump can't win."

"They said that last time, they were wrong," she continued. "They shouldn't be putting their thumb on the scales. Let's let democracy flourish. Let voters make up their own mind."

Van Susteren wondered if voters might be "reluctant" to express support for Trump because he uses "nicknames" and is "rough on people."

"It's called the hidden, undercover Trump voter," Conway said. "It's not because the president's nicknames for political opponents who are first terrible to him. It's because people get shouted down and worse in their everyday circle of life if they dare say that they support President Trump's agenda or Vice President Pence."

"In 2016, there wasn't a single hidden Hillary voter in the country, they were all out and about," she added. "That was true. There are plenty of hidden Trump voters, but it's not because they're embarrassed... It's because they are shouted down and ridiculed and belittled and argued with constantly. Every night it feels like Thanksgiving with the in-laws and extended family for these folks. So why take the chance of every arguing with people in places of work, places of worship, places of learning. That's why your vote is private."

Watch the video below from Full Court Press.